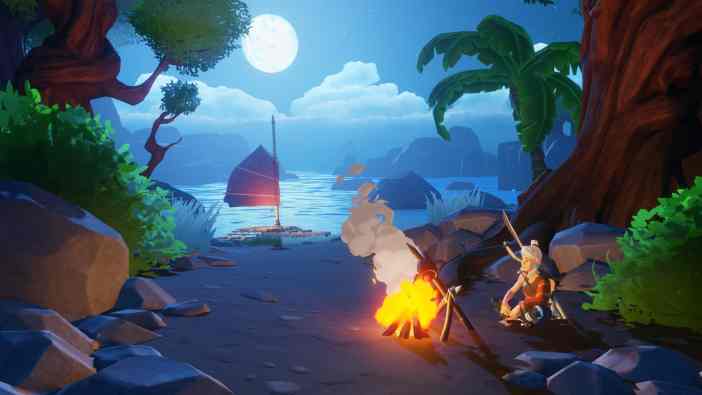 From 5 Lives Studios, the team behind gritty cyberpunk tactical strategy game Satellite Reign, comes Windbound, a brand new journey through rough seas and ever-changing island landscapes. A sizable departure from the studio’s previous title, both in mechanics and color palette, Windbound differentiates itself in more ways than one. Evoking the bright aesthetics of The Legend of Zelda: Breath of the Wild and the ambitions of The Legend of Zelda: The Wind Waker, Windbound combines several genres and influences to create a fresh but warmly nostalgic experience.

5 Lives co-founder and animator Mitch Clifford shared some insight about what players can expect from Windbound, including procedurally generated archipelagos, sea hijinks, and complex boat-building systems that intimately affect the way you traverse the ocean blue.

“(Windbound) is a survival, crafting, and exploration game, with an adventure game melding with it,” Clifford explained. “You play as a character named Kara. She starts the game separated from her fleet, shipwrecked, and you find yourself on this long-forgotten archipelago in this survival situation. Of course, being that you are trapped on an archipelago, you’re not just trying to craft and survive; you’re also trying to get back.”

This narrative setup creates several different goals and motivations for the player. They can spend their time rigorously exploring the island, hunting for artifacts, or they can concern themselves with immediately finding a way home.

“So it moves on to building and upgrading and maintaining a boat, which serves as a mobile base,” Clifford said. “It has a Don’t Starve sort of thing with its survival and crafting elements, plus a Wind Waker sort of thing with your sailing and adventure elements, and we’ve tried to marry in a bit of narrative thread through it all.”

Of course, concerns arose in development on how to best meld these disparate gameplay mechanics. To create a fresh and believable gameplay loop in Windbound, the 5 Lives team wove a narrative thread through the cycles of gathering, crafting, and spelunking, giving each activity a purpose and an end goal.

“You start off just trying to get by,” said Clifford. “Getting food, crafting weapons, upgrading your boat. You find when you get to this place that there’s ruins of an old civilization that used to be there. Plus, you can’t just build a boat and sail out to the horizon. There’s this supernatural storm that holds you in place. It’s not as simple as sailing into the sunset. The idea is to try and find the way to penetrate that storm, and the key to doing that is in all of these ruins that are scattered around. You have to track down these old weird sort of towers that have these keys on them. From there you’ll progress on and punch through into other areas of the archipelago. New islands, new biomes, new enemies, new resources, and so on.”

Alone and stranded on an island, there is little dialogue or writing to explain Windbound’s narrative in concrete terms. Even so, the narrative and its grandiose mysteries are ubiquitous, embedded into the world around the player through environmental storytelling. It borrowed from Journey to accomplish this, and there are lots of little clues from the past to find and interpret. However, Clifford added, “The game itself is open exploration, but the narrative is something that takes place in a more linear sort of sense.” 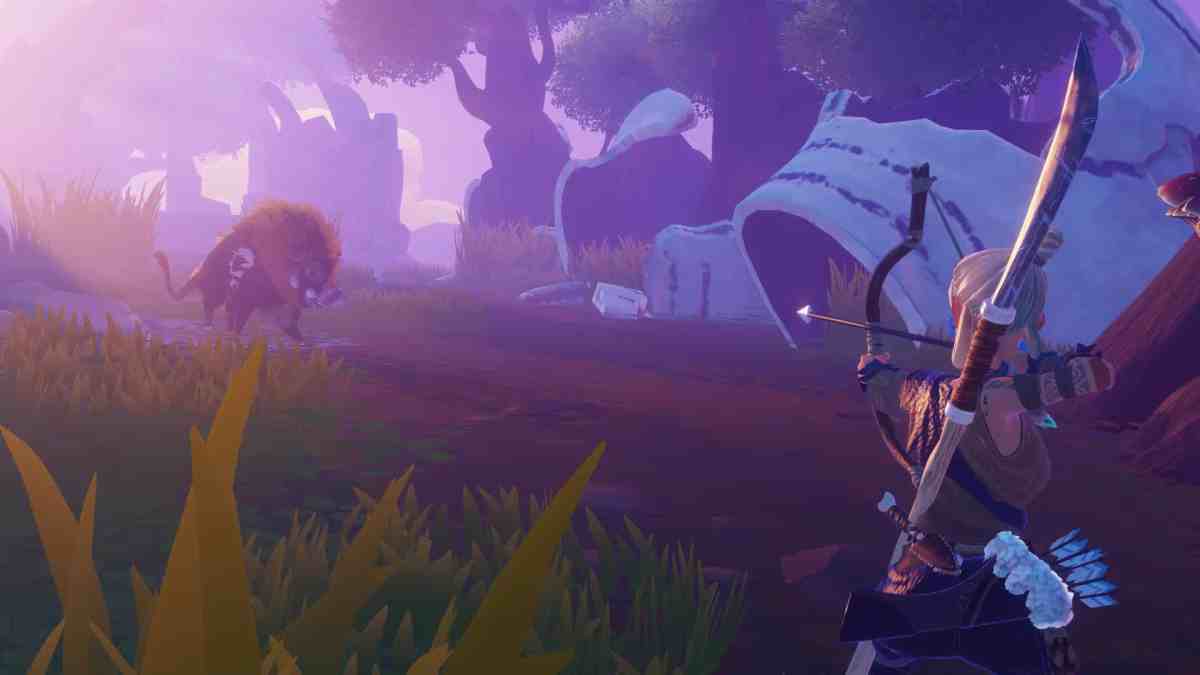 While Windbound takes obvious inspiration from classics such as Wind Waker and existing survival games, it sets itself apart with mechanics such as boat-building, which presents the concept of base-building in a way that is unique and directly relevant to this game. The team at 5 Lives wanted the sailing aspects of Windbound to feel more realistic too, more tactile and physical. You can’t control this wind.

“If the wind is blowing the wrong way, and you want to go that (opposite) way … you have to tighten the mast, and tack into the wind, and that sort of thing,” said Clifford. “That’s also influenced by the way you’ve crafted your boat. You can add modules onto your boat to change the width and the length and that sort of thing, but that also adjusts the balance of it. So depending on how extended you’ve got the mast, or the sail, you could be going cross-ways into the wind, but if your boat’s not well-balanced, you could tip over. That’s the sort of thing that you encountered in Wind Waker.”

Sailing your boat with the wind will not be your only concern in Windbound. The ocean is full of lurking dangers, these obstacles only escalating as you become a more capable sailor. Clifford warned that navigating your way through the ocean will not be a simple A to B.

“Early on there’s things like coral reefs that can be threatening because your boat is made of grass reeds woven together,” he explained. “So if you get trapped on shallow corals, they’re going to tear you to pieces. As you progress on, there will be more reefs, corals, rocks that will block your way into particular islands, storms that come by and make the seas rough, sharks that will come and get you, little critters that live in the reef and can jump on the boat and start munching away at it. There’s a lot of things you have to worry about, and it can sometimes get a bit crazy.” 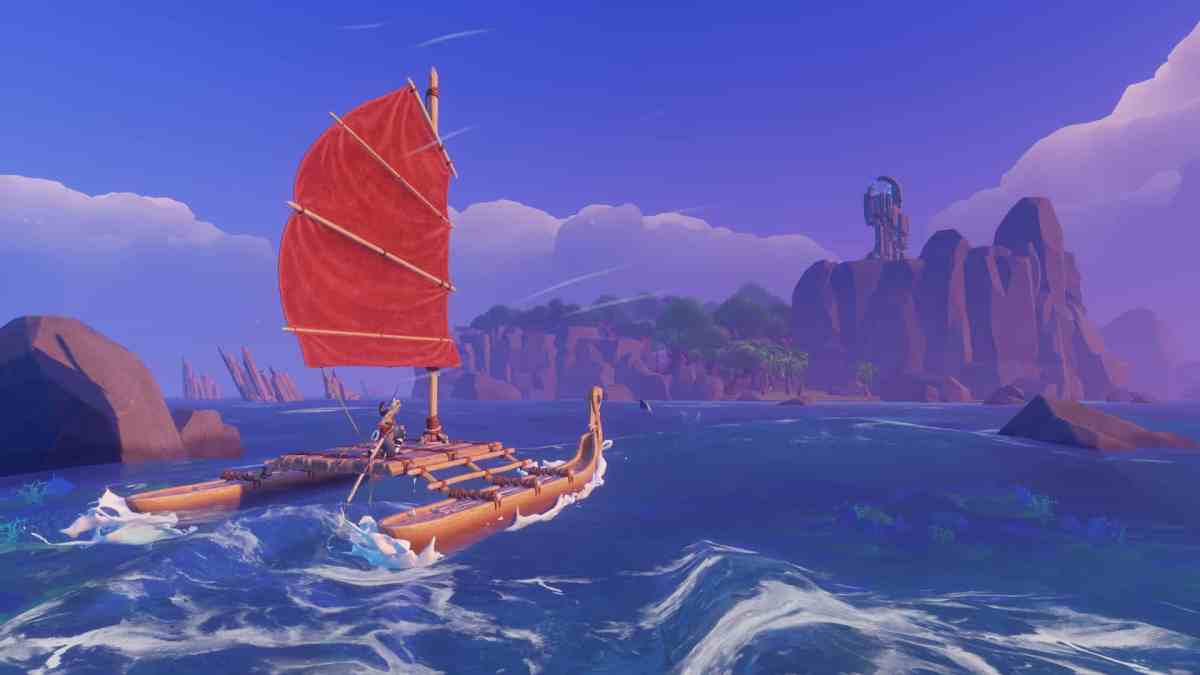 Fortunately, if you’re afraid of sharks and coral reefs, the islands will offer you plenty of fun on their own. Windbound is rife with hidden treasures and mysterious ruins, and due to procedural generation, each playthrough will make for a fresh adventure. How exactly procedural generation will affect a given playthrough will depend on how you choose to play though.

Clifford explained that “the game has some roguelike elements to it, optionally. We’ve got two gameplay modes, Survivalist and Storyteller. They’re essentially the same game, the main one being the Survivalist mode, and there are some roguelike elements. In that mode, if you meet an unfortunate end, you’ll find yourself (transported) geographically. You’ll hold onto some overall meta-progression elements, but you’ll be seeing a whole new world each time that happens.”

With an overwhelming amount of gameplay activities, artifacts to find, and unlimited islands to visit, Windbound is an exploration-adventure game that you will be able to sink your time into. Clifford said that in Storyteller mode, it could take players somewhere in the realm of “20-30 hours” to complete. Comparatively, Survivalist mode (the main mode) may take a bit longer. He joked, “It just depends: How good are you at survival games?”

Whether or not you consider yourself a survival game expert, Clifford emphasized that you will find a home in Windbound’s wide seas and artifact-riddled archipelagos. Be it for the sailing, the warthog fighting, or the silent contemplation of staring into the darkness by the fireside, Windbound’s colorful world offers an ever-changing adventure.