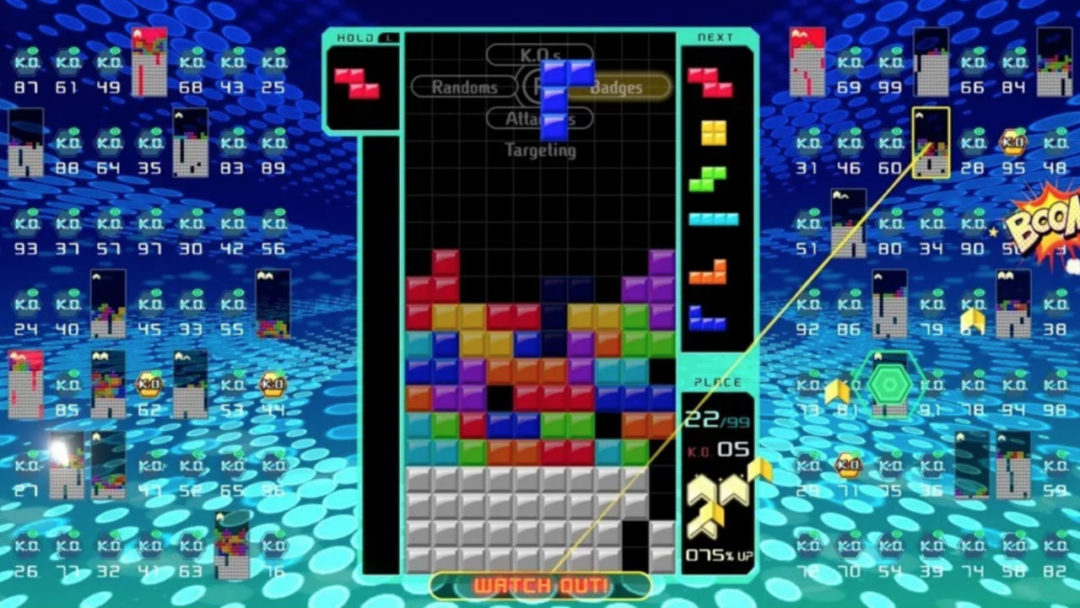 Yelling this at no one in an empty living at room at 1:06 a.m. on a Friday while wearing nothing but a terrycloth Jedi robe and ratty warm up pants, only sitting up from a prone position to shout, is precisely as undignified an experience as you’d think it is. I was, and remain, embarrassed. The shame just wasn’t more potent that that initial feeling of victory. I meant every word because winning Tetris 99 feels awesome. Transitioning from the zone —that well documented Tetris effect — into seeing a train of glittering badges flow into your UI before a blazing gold 1 appears next to your handle is a wanton rush. The delicious marriage of video gaming’s most perfect abstract challenge and the still evolving thrill of the battle royale game produced a victory so succulent it borders on sin. I’d played a baker’s dozen matches before my first win, most of them one right after the other. I was already itching for more as I sat there in my stupid robe, dazed and tapping A to queue up more people to crush.

Then it hit me: winning is the worst part of Tetris 99.

Here’s what happened in my brain the moment I came out on top of 98 other people just looking for a relaxing puzzle game. According to neuroscientist Ian Robertson’s book The Winner Effect, the win caused my brain to pump out a sudden flow of testosterone. Simultaneously, my mesolimbic dopamine pathway kicked into action. Dopamine pumped between my nucleus accumbens and ventral tegmental area, making me feel mighty good about myself and ready to do whatever it took to continue feeling mighty good about myself. No wonder Tetris 99 had me yelling like the worst guy in your pick-up basketball league; it was giving me the same juice.

According to Robertson’s research, winning — not just in Tetris 99 but in general — will help me live longer. My desire to keep winning, to keep the reward center of my brain as lit up as the shimmering badge rewards found all over Tetris 99, will motivate me to perform well in every aspect of my life outside the game. The problem is that winning also makes me, even in the privacy of an empty living room and a Jedi robe covered with coffee stains, act like a dick. Ohio State University psychology professor Brad Bushman’s 2012 study“Are People More Aggressive When They Are Worse Off or Better Off Than Others?” concluded that winners are far more aggressive towards the people they’ve already beaten than runners-up are to the victors. I have the capacity for grace and poise; I can remember it’s just a game. But in the moment, when the rush of arriving at the top of the battle royale dogpile is so fresh that my conscious mind hasn’t registered it yet, I’m an ass.

Surprisingly enough, I don’t really enjoy acting like an ass.

I love Tetris, though. While I don’t play it regularly, I go through bouts of furious play every couple of years, a compulsion that is neither totally predictable or unwelcome. Alexey Pajitnov’s game flows back into my life like some warm and tempestuous video game El Nino and I end up playing it for days on end. My preferred version is Nintendo’s 1989 Game Boy release. Its simple colors and music make it blissful and driving. I can settle into a pristine, transcendent state of focus while playing round after round of endless mode with the speed cranked up as high as it’ll go from the outset. When I lose, I start again. The difference between ascending up to level 23 plus — a speed when the Tetriminos are dropping almost as quickly as they appear — and crapping out accidentally before I even crack level 10 is incidental. All that matters is the unpredictable rhythm of moving from one game into the next, the slow wait for the long block, the unconscious weighing of what was a good round and what wasn’t

To call it meditative is disingenuous. Meditation is a state of calm where you can ideally allow conscious thoughts to flow away. Tetris flow is at least partially an anxious state. I am playing one of my favorite games ever, but I’m also agitated. Top Dog: The Science of Winning and Losing by Ashley Merryman and Po Bronson defines this stressed frame of mind as a challenge state. “A challenge state is stress, which is a good thing,”said Bronson in an interview shortly after the book was published. “The threat state is distress, which is a bad thing. In a challenge state, you feel like you’re excited to do well and you have far more blood flowing through the body and more oxygen.”

The pleasure and rush of the challenge state is almost perpetual when I play Tetris, a feedback loop of success into failure and back into success. Those fits of play almost always come just before I make a breakthrough in a creative project. The personal and intimate testing of my skill at the game results in a more peaceful and subtle internal gain that manifests later. I’m not saying that going on a crazy Tetris jag directly makes me better at things. Unlike Robertson and the others cited here, I’m not a scientist. I am, at best, merely competent at self-analysis. But the correlation is tangible when I reflect on it. The question then is why do I like “winning” when it means besting my personal best scores or speed at Tetris but not like actually beating other, human players in Tetris 99?

On the surface lies a simple answer. The flow is tainted in Tetris 99 by conquering, which produces that accompanying surge of aggression and the urgency to win again. Rather than a cyclic experience of success and failure, winning in Tetris 99 is an end unto itself. All I care about is that I won and that I beat everyone who thought that they could win instead. I just want to it again. It’s like a drug with a high so infinitesimally brief that I don’t actually experience it. It’s all compulsion, no euphoria. That high sacrifices the transcendence that comes with playing the game in its original state. Tetris can’t be Tetris with other players, but those 98 real human beings aren’t what ruins the game. My actualization of the challenge state is what ruins it.

The fullest answer is likely far more complex. Is my nature as a healthily competitive person reliant on an internalized sense of achievement rather than achievement compared to others? Am I actually frightened of some latent aggression in myself that comes out when I experience competitive success? Should I stop lying around in a Jedi robe? These aren’t questions I can answer simply or quickly in this space without my shrink. (He’ll hear about it, though. He’s a Tetris player too.)

What I can say with certainty is that Tetris 99 does hide a remarkable incarnation of the Tetris flow. Every version feels a little bit different: the rigid purity of the Game Boy game, the Nintendo nostalgia-infused pliability of the 2006 DS version, the plush sensory overload of Enhance Game’s Tetris Effect. All of them result in a slightly altered experience of that cogitative, enriching cycle. Tetris 99 is no different. I find the flow in banking tetriminos that you’ll need in a few more turns if your luck holds and sliding my targeting reticle from Attackers to Random to keep sending junk blocks and stay hidden from actively aggressive players. It’s even enhanced by the defensive and offensive measures distinct to this version. When I win, though, it all breaks. There’s no flow, just an idiot yelling at no one.