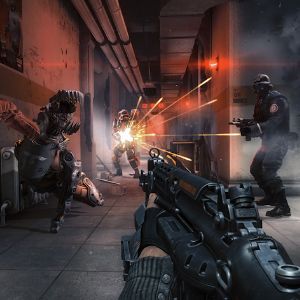 Wolfenstein: The New Order begins with a turret sequence, as musclebound growler B.J. Blazkowicz mans the guns of a fighter plane to shoot Luftwaffe from the skies. In a world where turret sequences are seen as one of the many overwhelming cliches of modern action games, it says something that this latest Wolfenstein entry chooses such a dead horse as its opening gambit.

We live in a world where vast sectors of the game industry are self conscious about the industry’s lack of innovation and depth. Strides made in independent development, not to mention pressure from critics who yearn for something more complex, has seemingly caused many developers to try and reinvent the wheel, reboot their property, or otherwise take a step away from the “old school” – or at least dress up old ideas in an attempt to mask how archaic they actually are.

All of this is to say that The New Order simply doesn’t give a toss about any of it, comfortably and confidently digging itself into a trough of shameless, mindless, old fashioned shooting fun. While it brings a few enhancements from modern gaming into the mix, MachineGames’ crack of the Wolfenstein whip is unapologetic in its embrace of the cliched and the simplistic.

Since this is Wolfenstein, that’s not necessarily a bad thing. Guns, explosions, Nazis, and robots. Pretty much all you need, right?

Taking place mostly during the 1960s, The New Order sets itself in a world where the Germans won World War II using highly advanced technology. Having conquered the world, the Third Reich imposes its will over Europe, with series mainstay Blazkowicz joining the resistance after spending 14 years in a catatonic state. That absolute arsehole General Deathshead is up to his eugenic tricks again, and players will have to take him down with as much gravel-voiced gumption as they can muster.

Despite its intriguing premise (who doesn’t love an alternate history story?) I have to say I felt rather unsatisfied with the amount of attention devoted to the Nazi-controlled 1960s. There are some nice touches – glimpses of a an oppressed London, German covers of classic 60s tunes passed off as originals – but the game consists mostly of formulaic interior levels that do very little with the potential-laden premise. Being a Wolfenstein game, one doesn’t expect much in the way of philosophical narrative endeavors, but given how much story is actually packed into the game, the lack of atmosphere building is a little disappointing.

Yes, shallow it may be, but there’s quite a bit of talking and storytelling in this one. Many levels are bookended with quieter moments in Resistance HQ, where Blazkowicz must undertake token fetch quests that tend to reveal a little more about supporting characters – characters who get a shocking amount of development considering how disposable the plot renders them. Despite the game’s rather remedial storytelling, however, it is at least gifted some terrific direction. Explosive sequences are offset by more tense moments of creeping atmosphere, villains are deliciously over-the-top, and pre-rendered cutscenes transition to gameplay with animations that attempt to tie two disjointed piece of content together quite pleasantly.

It’s always nice to have an excuse for all the killing, but The New Order is predominantly all about the killing, and do we need much more reason than “Here Be Nazis”? All of this exposition is just an excuse to get to the murder, after all. 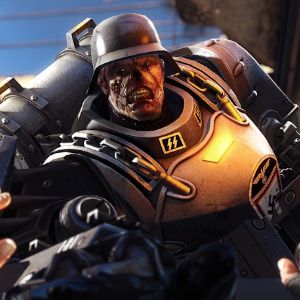 While concessions have been made to modern shooter sensibilities, this is a game that’s proud of its heritage, quite satisfied with placing you in long corridors full of walking meat targets. Targets that are, for the most part, quite fun to annihilate. Armed to the teeth with assault rifles, pistols, and energy weapons, there’s a mountain of killing on offer, and a few flavors of death a player can deal.

B.J. is able to dual-wield almost every weapon in the game, maximizing damage at the cost of accuracy, but if kicking in the door and laying waste to the occupiers is not your idea of fun, The New Order offers a few optional ways to play. When he’s not carrying a quasi-futuristic shotgun in each hand, Blazkowicz can carry a single firearm and use iron-sights with cover, enjoying a more tactical approach to battle. There are also options to sneak behind Germans and stab them full of holes, with a whole system built in to reward stealth, and Commanders that can be quietly offed to reduced the amount of enemy reinforcements should the stealthing fail.

These multiple ways to play are encouraged by a Perk system that unlocks bonuses based on the way you play. If you shoot enough enemies from a position of cover, for example, you’ll unlock perks on the Tactical perk tree. If, however, you stab enough Commanders without alerting them, you’ll gain rewards on the Stealth tree. Of course, you can (and probably will) change your play style whenever you want, so it pays to look at the Perks you might want and work on meeting their requirements – some of them take time, and if you don’t catch them soon enough, you could beat the game before you make it.

What I like most about Wolfenstein‘s gameplay is how it doesn’t shove anything down your throat – ironic for a game that skimps on subtlety in almost every other way. Yes, there is stealth, and yes there is cover, but you don’t have to utilize any of these features if you don’t want to. Unlike games such as Splinter Cell: Blacklist, The New Order doesn’t toot its own horn with regards to mechanics, allowing players to discover the choice of playstyles on their own, without grabbing their hands and making them view battles as blandly categorical, either/or situations. Any single battle could flow from stealth, to assault, to tactical methods, or it could be completed from beginning to end with a pair of assault rifles and an armful of grenades.

Despite the multiple paths, however, there’s no getting around the repetition that can set in. Despite a few variant soldiers, most of the opposition consists of the same stock, identically dressed soldiers, with weapons that really aren’t particularly interesting. The only truly unique gun is the Lazerkraftwerk, a laser cutter/cannon that the game obsessively forces players to use even though it’s not very fun. Using it to manually cut holes in wire fences or grates is amusing … at first, before it becomes a fairly overdone chore.

There’s nothing wrong with a game that does only a handful of things, provided they’re done well, and The New Order does serve its plate of brainless ultraviolence with a measure of appreciable quality. Even so, there were times where the game sapped my energy and patience, especially once it begun to spam heavily armored soldiers with rocket launchers and ricohet-shelled shotguns. These enemies are simply not enjoyable to fight, able to soak wasteful amounts of player ammo while dishing out their own death with stunning efficiency. Ironically, the game’s few bosses and giant robotic opponents are less annoying than these jumped up mooks.

Weird difficulty spikes notwithstanding, Wolfenstein is a pretty enjoyable romp with a number of notable highlights. An entire section set in a Nazi war camp is particularly engrossing, as is the entire beginning section during the 1940s assault on Deathshead’s compound. If I’m honest – and it may not be a popular opinion – I have to confess that I enjoyed Ravensoft’s 2009 Wolfenstein game a little bit more, finding it a touch better paced, and enjoying the occult influences more as opposed to The New Order‘s robot-heavy ideas.

Wolfenstein looks pretty good on the PS4, though it’s not going to make any eyes explode, and the cutscene compression is noticeable. There are also a few apparent – though minor – visual glitches that crop up now and then. There’s a lot of attention to detail when it comes to faces, though this might not be such a good thing during one of the game’s standout moments – a moment that uses such facial detail to create one of the more disturbing moments I’ve seen in a videogame. Her eyes, man … her eyes.

This latest entry into the beloved Wolfenstein series accomplishes pretty much what it sets out to do – deliver a fuss-free roller coaster of setpieces and guiltless butchery. It’s not exactly the most impressive of goals, but it’s not without merit!

Bottom Line: Wolfenstein: The New Order doesn’t make the most of a highly promising premise, but it provides the baseline of gun-toting freedom fighting that fans expect.

Recommendation: Do you like killing Nazis? This game is very much for people who do.