Blizzard may be using account details hidden in screengrabs to hunt down pirates. 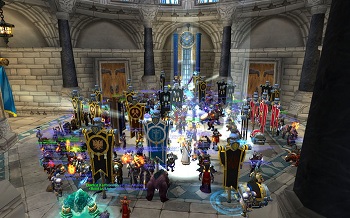 Taking a screenshot in World of Warcraft might do more than just show off your full armor set. Clever posters over at OwnedCore discovered data hidden inside their screenshots. In-game pictures contain your account ID, a timestamp, and the IP address of your server. The data is encrypted by a technique called steganography, which hides a secret watermark in each picture.

While actual account passwords are not revealed, it remains possible that hackers could somehow use this data to harass or compromise your account, especially now that this technique is in the open. Basically, when it comes to matters of account security, it’s generally best not to disclose anymore than you have to.

While Blizzard has yet to issue any official announcement on the discovery, the watermarking seems to be a way to root out private servers or other infringing activities. By reporting the server IPs Blizzard could locate and shutdown pirated games, especially if any users were silly enough to post screenshots on official forums.

This watermark can be found on screenshots going all the way back to 2008, around the time of the Activision-Blizzard merger.

Thankfully, the fix is pretty easy. Concerned players can either use high-quality screenshots (using the ‘/console SET screenshotQuality “10”‘ command), or use a third party screenshot utility to ensure their details don’t inadvertently leak out.