On Saturday July 20th of this year, filmmaker Zack Snyder took the stage at the San Diego Comic-Con to announce a sequel to his popular but polarizing Superman movie Man of Steel. Or, rather, since a sequel to such things are already all but a given in the modern business of franchised filmmaking, he came to announce that the sequel would feature an appearance by another comic-book character owned by Warner Bros. through their subsidiary DC Comics…

Big news, to be certain, though I note with some bemused irony that it might actually have been bigger news to its immediate audience had the character been someone slightly less well known – a Booster Gold, for example, or a Hawkman. The half-decade, multi-film buildup to The Avengers has made it something of a “given” that popular superheroes with currently-popular movie series of their own will eventually cross each other’s path, and while they’ve never before paired-off in a live-action movie there’s been three decades of generationally-popular cartoons (and almost three decades of original comics) to establish that they’re frequent friends.

It’s also an almost cynically-canny business move: Man of Steel is a hit, but it’s not close to as big a hit as it’s producers wanted it to be, and a lot of the so-called “buzz” (“it’s too dark,” “why didn’t Superman save people?,” etc) is not what one looks for when calculating whether or not to spend another $200 Million+ on a sequel. Lighting up the Bat-Signal and calling in what is easily still DC’s biggest draw for a helping hand only makes sense. Whether or not this was part of the plan all along (Warner Bros. tried to make Batman vs. Superman so far back that there’s old documentary footage of a still-living Christopher Reeve laughing about it,) the studio has effectively called in a cleanup hitter.

But it’s a big deal all the same, none the less. Sure, The Avengers were a big deal because no one had ever managed to port the “shared-universe” concept to film to that extent before, but in the broader cultural picture they’re a team of perennial second-stringers (in terms of long-term genre popularity) with the possible exception of The Incredible Hulk. Batman and Superman, on the other hand? These are the two most popular and enduring figures in the entire history of the genre. It’s obvious that people would be excited, even if they didn’t know anything else about the movie beyond the appearance of these two characters – it doesn’t even have a title yet.

But for some reason, it felt like everyone just started calling it Batman vs. Superman. (or Superman vs. Batman, same difference.)

Versus. Not “meets,” not “and.” Versus. That’s interesting to me. Batman and Superman are, broadly, on the same side. They aren’t the antagonists of their respective franchises, like the Aliens and Predators (or Freddy and Jason.) They aren’t even a particularly even “match” for a fight – one is basically a god known for (among other things) shoving asteroids away from impact with the Earth, the other decidedly human whose focus is on putting street-criminals in traction. There’s not even a sense of complimentary irony to a hypothetical conflict. Bats aren’t the natural of Kryptonians, for example. That kind of thing can matter: the makers of Freddy vs. Jason at one point claimed that the story started to fall into place once they realized that the origins of the combatants were tied to fire and water, respectively.

And yet, independently, the pop-culture hive-psyche immediately leapt to the conclusion that these two characters would be fighting – not just for one part of the movie, that’s a given, but as the basic premise of their meeting. Why? Why would that be the assumption?

Well, part of it could be the history. As mentioned earlier, Warner Bros. had a project in development titled Batman vs. Superman back in the late-90s. That film (which would’ve been set in-continuity with the Tim Burton/Joel Schumacher Batman movies) would’ve featured Batman being manipulated (by Lex Luthor) into declaring war on his “old friend” Superman when his (Batman’s) fiancée is murdered by a terrorist (who ultimately turns out to be The Joker, back from the dead) whom Superman had thwarted but refused to kill a few days earlier. There’s been absolutely zero indication that any element of this canceled project is being revived for this new one, however, and either way never-made movie projects are typically not the stuff of general public knowledge. 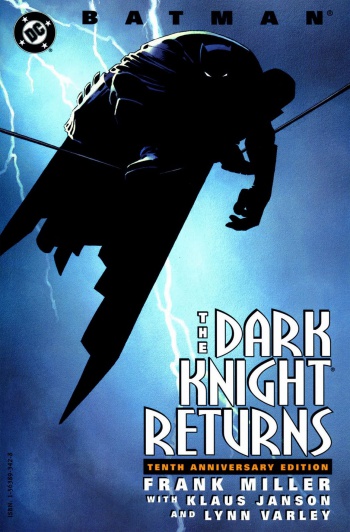 There’s also the matter of the way the announcement was made. Snyder feigned hemming and hawing about how much he was permitted to say about the next Superman movie for a bit, before summoning “Man of Steel” co-star Harry Lennix to the stage to read a passage of vintage comic dialogue that would help clarify things. Said passage (the reading of which climaxed with the reveal of the film’s logo) turned out to be a pivotal moment from Frank Miller’s seminal dark-future work The Dark Knight Returns,” in which Batman dons an armored suit to fight a corrupt, government-aligned Superman to the death.

Interestingly, Returns is often cited (particularly by its author) as the work responsible for “breaking up” Batman and Superman. In the Gold and Silver Ages of comics (re: from the 30s to the 80s) they’d always been presented as friends, though to be fair the DC Heroes in general were always a happy gang of buddies in those days. Sure, you’d see heroes fight eachother, but always over a misunderstanding or the influence of mind control. “Returns” introduced the notion that these two characters, at least as they were understood by the increasingly-unhinged Frank Miller (whose opinion people still took seriously back then), would be too ideologically opposed to be anything other than grudging allies of necessity.

That interpretation of the characters became the DC Universe default for about two decades, and even though there’s been an active attempt at getting them back into “best buds” mode in the 21st Century via the Batman/Superman series, the idea of them in perpetual opposition has been tough to wash off: When the two were first paired in a crossover of their respective 90s animated series – founding what would become the celebrated DC Animated Universe – they fought before becoming (uneasy) co-heroes.

Finally, there’s the tone of the whole affair, or at least what we know of its component parts. The most recent run of Batman movies, which share a producer and writer with “Man of Steel” in Christopher Nolan, are relentlessly grim affairs, (par for the course for post-“Dark Knight Returns” Batman material) fixated on the idea that “real” superheroism is a life of pain to be escaped from. “Man of Steel” itself is the darkest vision of Superman ever to not feature clones of Hitler, a film utterly disinterested in any aspect of the character beyond his ability to wreak devastation on his surroundings. It’s hard to imagine this version of Clark Kent, who’s supposed to be the nicer of the two, wanting to make friends with Bruce Wayne (or anybody) just because they share an interest in crime-fighting.

So, not only is it not surprising that people assume it’ll be “Batman VERSUS Superman,” it’s not even a bad guess. That will probably be the premise, or most of it: They’ll meet, they won’t get along, they’ll fight (a lot, if “Man of Steel” was any indication) and then they’ll put it aside to fight some mutual threat in the third act. Handshake, pithy remark, see you in two years for “Justice League.”

I hope I’m wrong about that.

Not that I don’t want to see the whole “who would win?” thing settled up onscreen, obviously that’s part of the natural appeal of these productions. But am I looking forward to yet another movie that’s more about tearing iconic good guys down (and what else but that would you call contriving a scenario for two heroes to be semi-justifiably at each other’s throats?) rather than letting them fulfill their primary function of offering inspiration or even uplift? Can’t say the prospect of that thrills me.

Maybe I’m jumping the gun here. Educated guessing or not, the damn thing has only just been announced. But what I know for certain is that nothing sounds more tiresome to me than Batman and Superman turning up in the same space mostly to be enemies. Again. And what I suspect for near-certain is that people have every reason in the world to expect that to be exactly what we get.