If you’ve ever played a JRPG, particularly one from before the early 2000’s, chances are you’ve encountered the Wussy RPG Girl. Meek and doe-eyed, these healer characters double as the love interest and are usually billed as the “heroine,” though they seem to possess little power of their own. In fact, it’s rare that they do anything more heroic than grappling with low self-esteem or getting kidnapped – which tends to happen a minimum of twice. 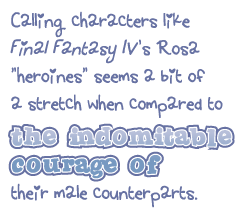 Calling characters like Final Fantasy IV‘s Rosa “heroines” seems a bit of a stretch when compared to the indomitable courage of their male counterparts. But these characters aren’t designed to be like modern “heroines,” who are just as willing to stare danger in the face as the boys. It’s the same character type used in Japan hundreds of years ago, when women were seen as inherently fragile and their “heroism” was defined by their maidenly virtue, not their actual ability. Their chief purpose is just to make you feel sorry for them.Or, to put the problem in the words of Shadow Hearts‘ Alice: “I-I can’t. No … I … I can’t do anything. I … KYAAAAAAAA!!“

Happily, ladies with spines are finally starting to outnumber the wusses. Nevertheless, writers should keep in mind that giving Mike Tyson breasts and a sword might not be the best way to go about doing it.

Wussy RPG Girls go back much further than gaming does. Kabuki is a Japanese style of drama popular through the 17th and 19th centuries, famous for its over-the-top stories and characters. Actors were trained to play a variety of stereotyped roles, or “types,” that reappeared frequently in plays. A very popular type of heroine was the “Princess Type,” and she was virtually identical to the Wussy RPG Girl. Beautiful and innocent, she represented a sort of maidenly purity – the ideal Japanese woman of the times.

Tokugawa-era Japan was a deeply sexist society, and the character of the Princess Type reflected that. These characters’ personalities followed the Onna Daigaku, a contemporary guide to “appropriate” female behavior, to a T: “The only qualities that befit a woman are gentle obedience, chastity, mercy, and quietness.” Naturally, that kind of heroine didn’t get to do a lot of ass-kicking, with a major exception. Because Japanese women were expected to serve the needs of others before their own, she often made heroic sacrifices, usually for her samurai beau. In Hashi Kuyou Bonji no Mongaku, for instance, the heroine hides herself under the covers and tricks her husband’s assassin into thinking she is him, dying in his place. But for the most part, the woman was passive. Cultural norms stressed a deep contrast between the sexes, and it was the men who were tough. Submissiveness and vulnerability were inherently female traits.

Thus, tragedy befalling the heroine was commonplace in kabuki. The writers and actors would spend a great deal of time endearing the dainty, pure Princess Type to the audience, then put her through melodramatic scenes of torment. These might include poverty, torture, disease, or disfigurement. Whatever the case, seeing this innocent but powerless creature in distress was an easy way to tug at the audience’s heartstrings. Her feminine fragility made her more endearing -and the manly samurai more heroic when he came rushing to her rescue. 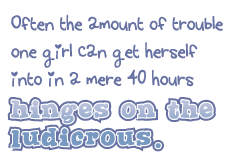 Considering the time period, it’s unsurprising that women in kabuki were portrayed in this manner. But why, 300 years later, are the leading ladies in JRPGs up to more of the same? For someone who’s supposed to be saving the world JRPG heroines spend a lot of time taking a beating. Shana in Legend of Dragoon is first kidnapped, then falls prey to a mysterious disease. Alice from Shadow Hearts gets kidnapped multiple times, writhes in agony from a curse and, depending on what ending you get, actually dies. Often the amount of trouble one girl can get herself into in a mere 40 hours hinges on the ludicrous. Colette, Tales of Symphonia‘s Wussy RPG Girl, systematically loses her ability to eat, feel, and speak; willingly dooms herself to die as a sacrifice for the world; has her soul and memories erased; comes down with a deadly illness that slowly turns her body into crystal; and is kidnapped for use as a dead goddess’s vessel, threatening her soul a second time. Unlike heroes, who tend to triumph over adversity through force of will alone, it’s the party that saves these heroines every last time.

This might be tolerable if she were also a dynamic character, but Wussy RPG Girls rarely have much going on in the personality department aside from a bland feminine “kindness.” Usually this is conveyed hamfistedly, perhaps through a love of flower or incessant reminders to the protagonist to practice proper hygiene. And just in case being weak and boring isn’t compelling enough, JRPGs go through the trouble of making the her emotionally pathetic, too. Sometimes she was tortured in her childhood, like Yulie from Wild Arms 4 or Atoli from the .//hack series. And she frequently suffers from low self-esteem, fretting that she’s a “burden” on the party or blaming herself for events that are beyond her control.

Of course, just about everything is beyond her control. She exists in order to be pitied, and to give her power over her destiny would defeat her entire purpose. Just like kabuki’s Princess Type, the only time she behaves heroically is in the form of pity-inducing self-sacrifice, such as when Eternal Sonata‘s Polka nonsensically chucks herself off a cliff to save her friends. And while, as in Lunar: Silver Star Story Complete, she often turns out to be some powerful goddess or angel, she almost never gets to use that power for herself. Instead, the villain kidnaps her, using her as a battery for some sort of nefarious plan, prompting the hero to rescue her yet again and take her back to a peaceful life in the village. Where’s the heroism in that? Even when the lady becomes a goddess, she still can’t save herself.

Unsurprisingly, Wussy RPG Girls have few fans among female players. The Princess Type may have been popular among the ladies in Tokugawa Japan, but young women who grew up with Buffy the Vampire Slayer tend to want a heroine capable of something other than sobbing uncontrollably in the corner. Yet JRPGs remain extremely popular among women, perhaps more so than any other genre. I know next to none who actually like these characters, compared to oodles who start grinding their teeth at the mere mention of them. Wussy RPG Girls are a necessary evil we endure, but not enjoy, when playing the games we love. 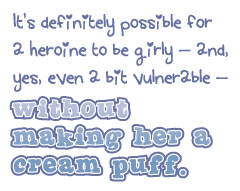 Game writers seem to have finally gotten a clue, however. The prissy Princess Type has been on the decline in recent years, replaced by more capable female leads. And by “capable,” I don’t mean they need to deck their male co-stars in the face once per hour of game time, a la Lightning of Final Fantasy XIII. While an immense improvement over the Wussy RPG Girl, Lightning is really an example of the same principle taken to the other extreme. In the place of constant kidnappings, the game pounds her toughness into players’ heads by having her perform random acts of aggression. She’s written as far more overbearingly macho than the majority of male protagonists and, just like the Wussy RPG Girl’s nubile frailty, her toughness is so exaggerated that it’s sometimes hard to take her seriously. Can you imagine a Final Fantasy VII with Cloud constantly sucker-punching Barret?

Final Fantasy XIII conspicuously avoided giving Lightning even slightly feminine traits, perhaps for fear they would still carry that ancient connotation of weakness. But it’s definitely possible for a heroine to be girly – and, yes, even a bit vulnerable – without making her a cream puff. Althea from 2006’s Luminous Arc 2 is a good example. This pink-haired magical girl is soon revealed to have a great power: She’s a “Beast Fiend” created by an evil sorceress, capable of using lost magic to control powerful white fire. No villain kidnaps her to use those powers in his deeds; they are hers to wield, and she kicks serious butt with them, saving the party from the brink of death. Of course, her dark heritage causes her to doubt her humanity, and the male hero does comfort her. But he does so with the same words Althea used to bring him back from his own earlier moment of self-loathing.

The Wussy RPG Girl is unlikely to die out any time soon; she’s a relic of hundreds of years’ belief that the sexes are completely different. The strength expected of male and female heroes in Japan’s kabuki differed dramatically based on that assumption, and that sentiment lives on in the sword-wielding bad-asses and quivering maidens of traditional JRPGs. But writers are at last realizing it doesn’t have to be that way. The protagonists of games like Luminous Arc 2 are, irrespective of gender, neither pure warrior nor pure wuss – and ultimately, that’s what makes them all the more compelling.

Eileen Stahl is a University of Michigan graduate and freelance writer living in Los Angeles. She currently continuing her heroic struggle against rampaging, homicidal deer in Etrian Odyssey III.