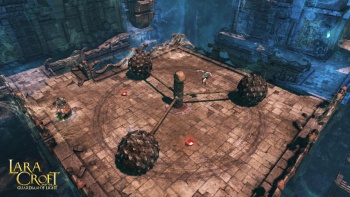 The first download only Lara Croft game is going to arrive fashionably late on the PlayStation 3 and PC.

The latest Lara Croft game, Lara Croft and the Guardian of Light, is coming out on XBLA next month, but if you want to play it on your PS3 or PC, you’re going to have to wait a little while longer.

As was reported yesterday, Guardian of Light will feature as part Microsoft’s Summer of Arcade promotion, and in order to participate, developer Crystal Dynamics had to agree to a four week window of exclusivity.

But Crystal Dynamics is keen to get the Guardian of Light on all platforms as soon as it can, and is trying to get concrete dates for the Steam and PS3 releases: “Unlike a disc based title where we can pick our window, you have to go by what the first parties approve and give you a date … We have requested a specific date and hopefully we’ll get that and it’s not too long after the 360 SKU.”

Lara Croft and the Guardian of Light comes out on XBLA on August 18th. Crystal Dynamics says it hopes to have a release date for Steam and PSN in the next seven to ten days.