Yooka-Laylee is the Kickstarted spiritual successor to a beloved retro franchise, brought to life due to said franchises’ copyright holder refusing to do so itself. While that does sound like a very familiar tale, I can assure you that Yooka-Laylee‘s dynamic duo are in a completely different league from a certain mighty number. Instead, the game presents itself as a nostalgic ride through time, bringing the collect-a-thons from the N64 era into the modern age.

Yooka-Laylee is a Banjo-Kazooie sequel in everything but name. You play as a duo of critters, collect a whole bunch of stuff in several huge, open-world levels, and overthrow an evil mastermind. You’ll also break the fourth wall quite a few times and have a jolly good laugh here and there. You’re just not a bear and duck-thing this time around. 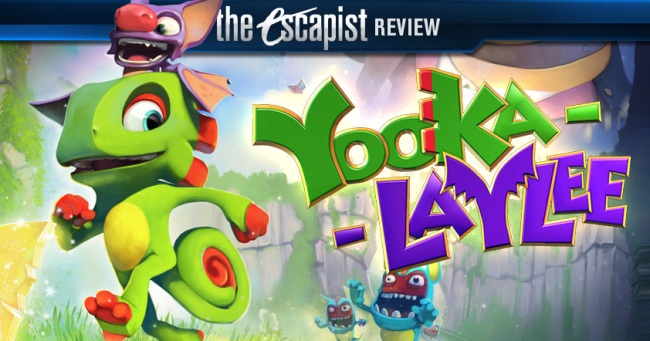 This time, Yooka, a chameleon, and Laylee, a bat, have their afternoon lazing rudely interrupted by Capital B, a super villain who has stolen all of the books in the world with a magic book sucker-upper in order to get his hands on “The One Book” (to rule them all?) The One Book appears to be sentient, however, and rather than being captured by Capital B, it instead rips out all of its pages and scatters them around the world. Each of these “Pagies” is also sentient, and they will be the main collectible you’ll be collecting to progress through the game.

That’s about it, as far as story goes. You’ll meet a few more supporting characters as you make your way through the game, such as Trowzers, a pants-wearing snake who’ll sell you new special moves, and Dr. Puzz, who can transform you into bizarre creatures that allow you to access new areas, but your motivation for the entire game is pretty much “collect Pagies. Stop Capital B”.

You’ll start out with just a single world unlocked, and not that many special moves. As you collect more Pagies, you’ll unlock more worlds, and get to expand existing ones. As you collect more quills, you’ll get to purchase more special moves, such as the ability to glide through the air on Laylee’s wins, or suck up fireballs to shoot at enemies with Yooka’s tounge. Gameplay is exactly what you’d expect: it’s a 3D platformer where you run, jump, swim, puzzle, and even fly yourself to victory. Psychonauts, Conkers Bad Fur Day, Spyro and of course Banjo-Kazooie fans will find themselves right at home.

What I loved most about Yooka-Laylee was just how little it held your hand. Following a very short tutorial, it just sort of unleashes you on the world, and expects you to figure stuff out for yourself. Some Pagies are hidden in plain sight, and simply require some running and jumping skills to get to. Some require a specific special move to be unlocked to get to. Others are locked behind puzzles, requiring you to think a little. Some are even locked behind other collectibles, requiring you to collect other stuff in order to get to them. In every case, the game just lets you do your own thing. There are so many Pagies hidden in so many different places that players can just find their own way, discovering new areas as they see fit.

Too many games these days will smother players in hints, pointing them in the right direction the second they even think of venturing off the path. Yooka-Laylee is such a fantastically designed game in that it doesn’t need that. I never felt lost. I never felt like there was a puzzle too hard to solve, a Pagie that was impossible to obtain, or a level that was too difficult to complete. While I didn’t collect every single Pagie in every single level, I never hit a brick wall, and was able to progress through the game to its completion fairly smoothly.

If you’re a fan of that self-depreciating, fourth-wall breaking humor that Banjo-Kazooie was famous for, you’ll find no lack of it here. The writing in Yooka-Laylee is covered in cheese, and had me in stitches quite a few times. It’s cute, it’s funny, and it doesn’t take itself too seriously. Yeah, the plot is very simple, but Yooka-Laylee delivers it in style.

Speaking of, I’m in love with Yooka-Laylee‘s art-style. It’s managed to bring the spirit of those blocky, polygonal N64 graphics into the modern world, while still feeling shiny and new. Everything is smooth and beautiful, but somehow still rough around the edges. It really feels more like it is a remastered N64 game than something built entirely from scratch.

In fact, the only real issues I had with the game somewhat stem from this, in that I encountered a few “N64-esque” technical hiccups while I was playing. Stuff like: some dialogues can be skipped by hitting A, but others, perplexingly, cannot. Sometimes the camera will reset to such a horrendous angle that I found myself walking off a cliff I didn’t see. There’s no manual save feature, and it’s sometimes difficult to tell you where and when your last auto-save will dump you. The menus are a bit of a nightmare to work through, especially when trying to remap your controls (there’s also, as far as I can tell, no way to actually quit the game from the main-menu without alt-f4ing).

But these are all minute little annoyances, rather than full-on complaints. The game runs very smoothly 95% of the time, without any random slowdowns, framerate drops, or glitches, and is overall a solid experience.

Bottom Line: This time around, Kickstarter actually did come to the rescue, delivering a game that is very much worthy of being called the spiritual successor to Banjo-Kazooie. Yooka-Laylee is a game for fans who miss the N64 days of running around a huge, open map, collecting a bunch of stuff and having a bit of a laugh. It’s cute, it’s funny, and a few minor technical issues aside, it’s exactly what it promised to deliver.

Recommendation: Banjo-Kazooie fans will no doubt enjoy this, and should purchase it immediately. For the rest of you, if you liked those old school “collect-a-thons”, or are just looking for a bit of a light-hearted adventure game, Yooka-Laylee is a very solid contender that’s worth the price of admission.