With more than 2,390,992 articles in English (and counting), a certain wiki has become the largest encyclopedia in the world, though not without its fair share of controversy [citation required]. With anyone capable of editing its entries, authors with disparate senses of objectivity may engage in “edit wars,” where an article’s content enters a state of flux. In certain cases, the admins of the site have even stepped in and locked these entries, preventing further edits.

As one particularly vehement wiki editor, your task is to reign over others with your objective opinion, getting your voice into as many entries as possible. Beware other users, however, who will delete your edits and replace them with their own. Too many changes to an article and it becomes eligible for lockdown, but as long as your content dominates when lockdown goes into effect, you don’t really care.

One deck of playing cards per player, each with unique backs.

Each player should have his/her own deck of cards, and should shuffle the deck after removing any Jokers.

Once the decks are shuffled, each player should begin by drawing five cards and putting them in his/her hand. Once all players have done so, they should count down to signal the start of play.

The object of You Have to Lock the Entry! is to have the most contributions in as many locked entries as possible by the end of the game. This will mean creating new entries, adding content to existing entries, and deleting other user’s contributions.

There is no turn structure. Once the game begins, players play cards as quickly as possible. Players should always try and have a maximum of five cards in their hands, drawing a new card from their decks for every card played. The game ends once all players are out of cards. 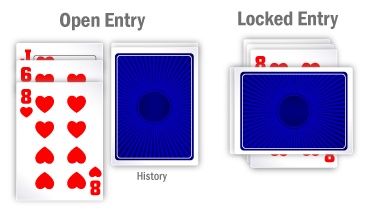 Players can create a new entry on the wiki by playing a face card from their hand (Jack, Queen, or King) to the center of the table, face up. Only six entries can be open at a time.

Once an entry has been created, players can add content to that entry by playing cards of the same suit (Ace through King) from their hand onto the entry pile, face up. With the exception of the starting face card, any card played onto an entry must be of a higher value than the card beneath it.

Sometimes the best way to contribute to an entry is to eliminate the contributions of your opponents. Doing so will allow you to reduce their presence on an article, and increase your own.

In any entry, the top card of the entry pile can be removed, if you can replace it with another card of your own. When removing content from a wiki entry, that content must be discarded in the “history” of the entry, by placing the card face-down next to the entry pile. This signifies that a change has been made.

Too many changes to an entry will make that entry eligible for lockdown. If at any point five or more cards appear in the history pile of an entry, any player can lock the entry and remove it from play.

To do so, a player must yell “Lock!” and stack the history pile, still face down, perpendicular to and on top of the entry pile of the article (see image). The locked entry is then removed from play, and another entry can be started in its place.

If at any point a player decides they have no good cards in his hand, he can opt to discard his entire hand and draw five new cards. A player can do this as many times as needed, but it should be viewed as a last resort, as discarded cards do not get reshuffled into the deck.

Once all players have gone through their entire decks of cards, and all possible moves have been played, the game is considered over. At this point, the closed entries should be evaluated and scored.

Each closed entry must first be checked to make sure it meets the closed entry requirements, with at least five cards in the history. If so, the non-history cards are counted for each player (using the unique card backs to identify which card belongs to which player).

Designing You Have to Lock the Entry!

The internet is a playful space, and the most successful websites take advantage of this playful nature. In a way, we play games with the internet, and we’re constantly playing with the other net-denizens with whom we share the space. It’s not a major logical leap, then, to build a game based around a particular website. It is, however, damn fun.

Wikipedia’s mass appeal, and ambiguous notions of “authority” make it an interesting focal point for a game. In my design, I wanted to concentrate on the secret battles that occur on the site, accessible on any article by clicking the “history” or “discussion” tabs.

The decision to build a card game came from my desire to have objects representative of articles on the website. Rather than designing play materials from scratch, it seemed easier to build from the tropes of playing cards.

The basic action of the game was easy to replicate with cards. I wanted players creating and editing Wikipedia entries, while deleting the edits made by their peers. Turn-based gameplay was eschewed in favor of a real-time, rapid-fire play style, reminiscent of the popular card game Nertz. The simultaneity more closely resembles the chaotic nature of the internet, and I was stubborn to retain it through the game’s iterations.

As always, the biggest issue throughout the design process was reconciling the gameplay mechanics with my own adherence to the game’s fiction. For the sake of rule-comprehension (and fun), I like my games to be as cohesive as possible, in terms of narrative. In the end, certain aspects of the game had to be altered. Unlike Wikipedia, players must justify every deletion with their own addition, preventing mass content deletions and general jerk-ness. The fiction suffers somewhat for this, but the gameplay wins out in the end.

Iterative playtesting was key to this design. The game evolved rapidly through multiple rounds of testing, and many of the rules were designed mid-play — cards in one hand and pen in the other. The game met my expectations in terms of fast-paced entertainment: not a terribly deep experience, but an enjoyable one for the time it lasts. At the very least, it serves as a reminder of the internet’s more playful side.