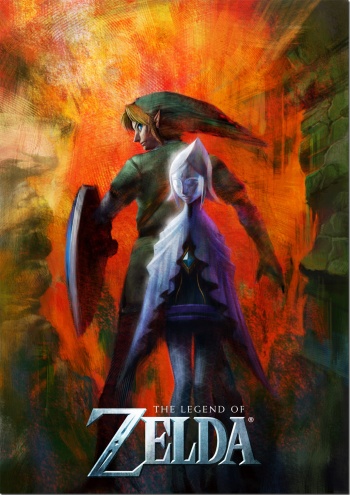 Here it is: the first piece of art from Nintendo’s work-in-progress Zelda game which may-possibly-but-probably-not come out on Wii next year.

The Legend of Zelda (and the expected sight of Shigeru Miyamoto wielding a Master Sword and Hylian Shield) was conspicuously absent from Nintendo’s conference at E3 this year, but Miyamoto did dish a bit about the title during an invite-only post-conference gathering. He even revealed the first art of the game, which Nintendo has now released for public viewing.

Take a look at it to the right (and for a bigger view click here). It’s Link, obviously, looking a bit like his Twilight Princess self, with a mysterious blue sculpture (?) standing in front of him. A Zora? Maybe. Is she even alive? I don’t know. What’s up with that crystal in the center or her chest, and, more importantly, what’s with those ugly stockings?

Here’s some more fuel for your speculative fires, by way of IGN’s interview with Miyamoto himself: “Well, the story setting for this Zelda is, of course, in a completely different era and Link is older than he was previously. More approaching adulthood. There is one hint. Maybe from the art work you can see that he’s not holding a sword.”

So Link’s definitely older. Why doesn’t he have a sword? Probably because he hasn’t played the first quarter of the game that you always have to get past to get the Master Sword in every damn Zelda. I mean, really, why don’t you just give us the Master Sword to begin with? Now Link doesn’t even have one at all? Come on.