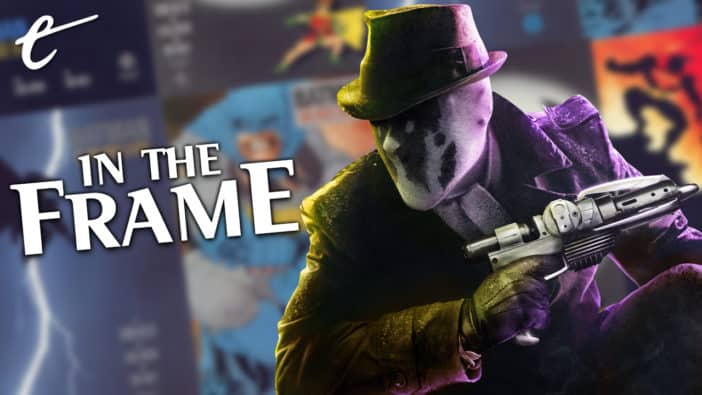 Zack Snyder’s DC Extended Universe offers a pocket history of a notable stretch of American comic book history, running roughly from Crisis on Infinite Earths in 1985 through to Final Crisis in 2008. It is a nine-hour metatextual journey through a troubled era for the industry and the characters that inhabited it, beginning with darkness and ending in redemption. It’s a glorious oddity, a remarkable and messy piece of blockbuster pop art that honors an important chapter in its characters’ history.

Comic book historian Peter Sanderson has described 1986 as “the annus mirabilis of comics.” It was a revolutionary year for the medium. Marvel produced classics like Elektra: Assassin and “Born Again.” However, it was DC that really shook up the industry. Marv Wolfman and George Pérez’s Crisis on Infinite Earths carried over into March 1986, offering a massive continuity-wide reset of the company’s expansive and complicated continuity. However, this was just the opening salvo.

In February 1986, the first issue of Frank Miller’s The Dark Knight Returns hit the stands. That September, Alan Moore and Dave Gibbons’ Watchmen launched. These twin books would redefine American superhero comics, offering a fresh and mature take on a familiar archetype. It is perhaps too much to argue that “comic books became literature” with the publication of Watchmen and The Dark Knight Returns, but they radically redefined the genre – for better and worse.

Watchmen and The Dark Knight Returns represent something of a paradox for superhero comics. They are the alpha and the omega, the beginning and the end. “I joked to Alan once that he did the autopsy [on the idea of superheroes] and I did the brass-band funeral,” Miller would later recall. “Because it really did feel to me like a handful of grown-up fans waving our childhood heroes a fond goodbye.” However, reports of the superhero’s death were greatly exaggerated. 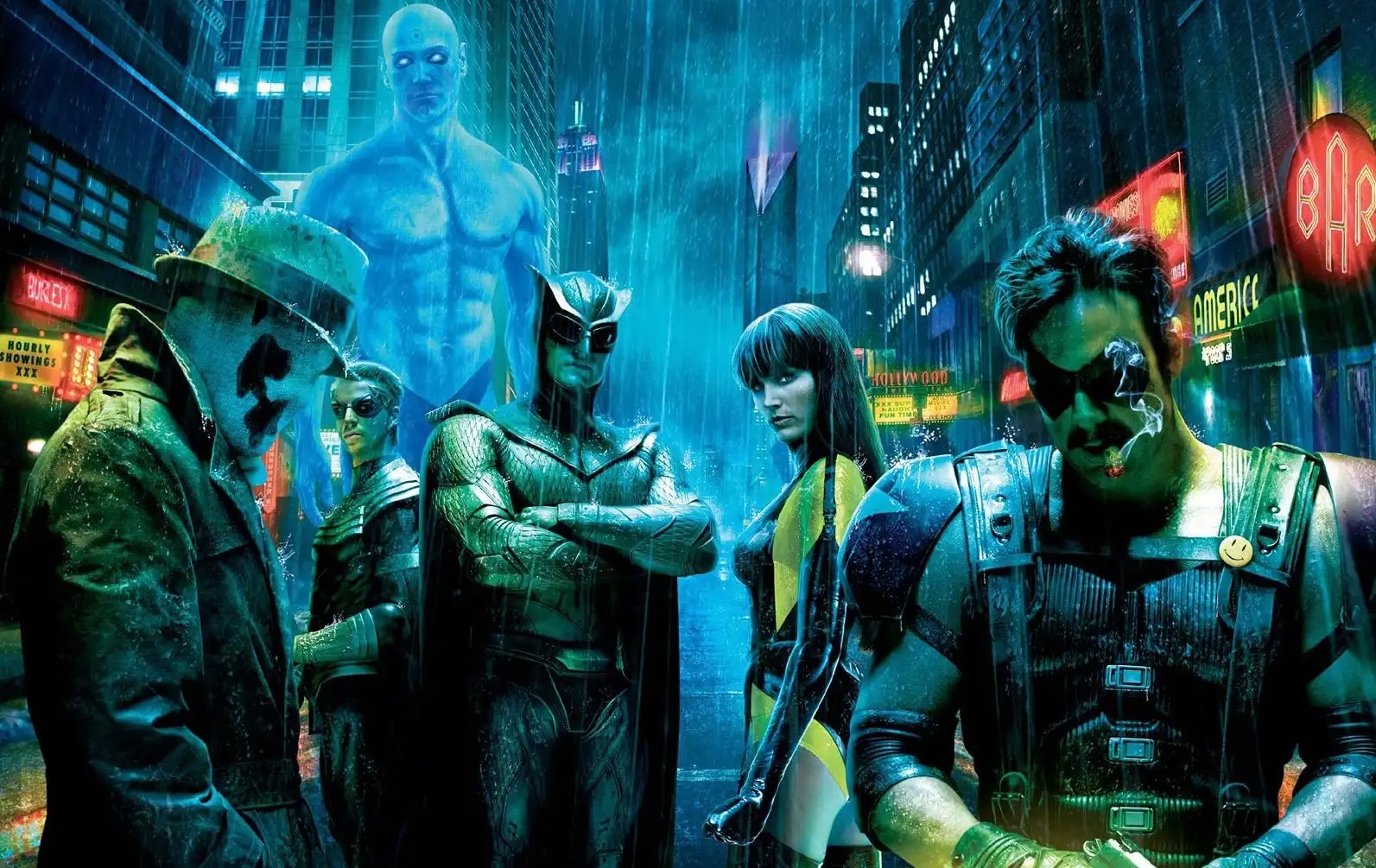 These books would also define a generation of superhero stories, many of which would feed into the superhero movie boom. “Much of the playbook was written in 1986, and its instructions are being duly followed,” contended Abraham Reisman. This influence transcends characters or company. Sean Carney argued that “all superhero comics today live in the shadow of two towering monoliths.”  And yes, that includes the work of Marvel Studios.

To pick an example, Mark Millar and Steve McNiven’s event comic book Civil War, which inspired the Captain America movie of the same name, is often framed in terms of Watchmen and The Dark Knight Returns. Millar himself has described Alan Moore and Frank Miller as “both [his] heroes” and “the best we’ve ever had.” Millar also wrote The Ultimates, which was a major confirmed influence on The Avengers. (Joss Whedon even wrote a foreword for a collection.) All this stuff is part of comic book movie DNA.

The influence wasn’t always good. Miller and Moore inspired a generation of writers and artists that would push mainstream superhero comics in darker and edgier directions in the ensuing decade. Jackson Ayres would point out that “many of the period’s self-consciously ‘mature’ tales are in fact insipid and mindlessly violent, lamely dressed up with a pseudo-intellectual veneer.” Writers and artists imitated Moore and Miller (even formally) without understanding why those stories worked. Moore himself would later lament, “I increasingly get a sense of the comics industry going through my trashcan like raccoons in the dead of the night.” 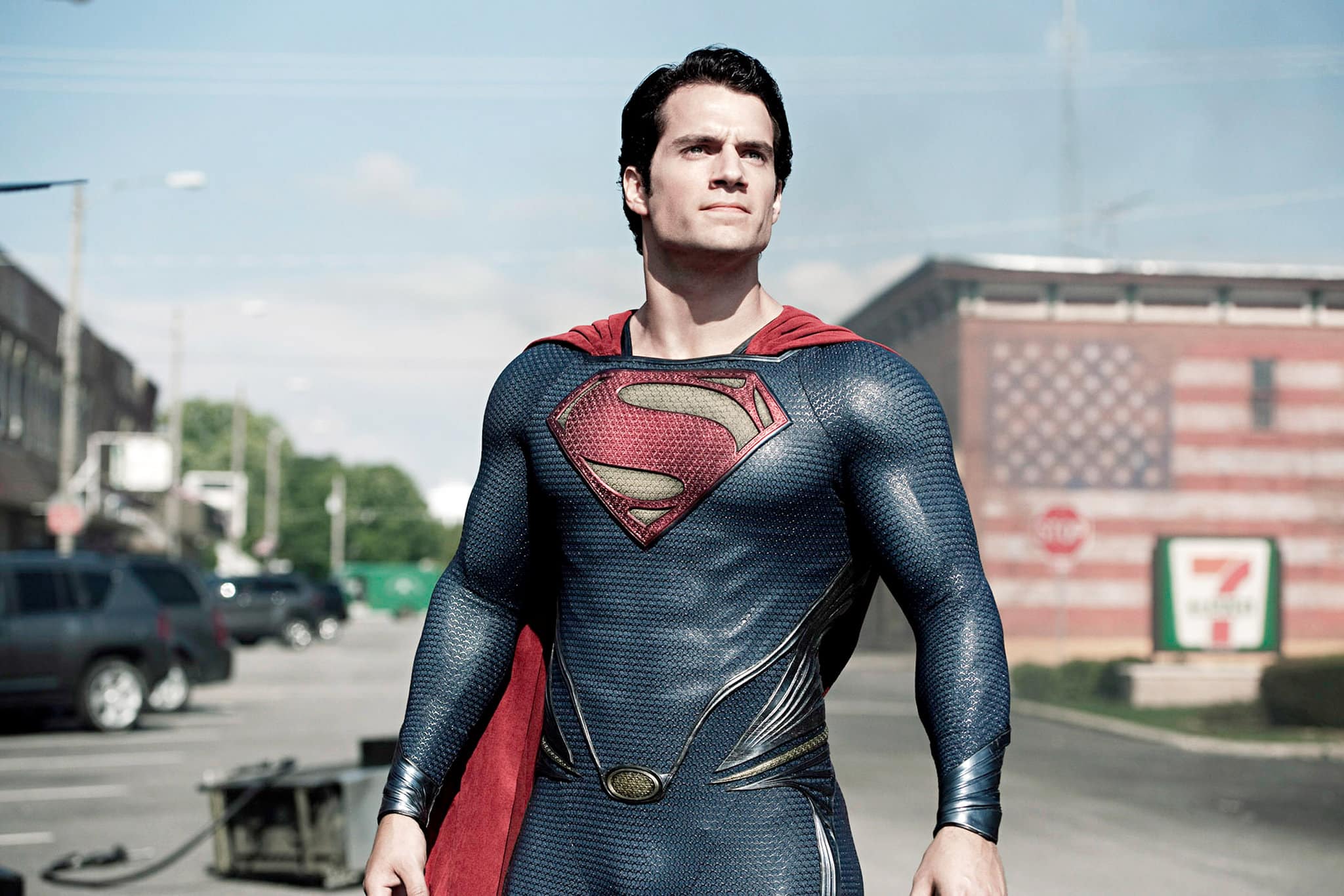 Perhaps inspired by a minor detail in The Dark Knight Returns, DC would allow readers to vote on killing off the character of Robin in the infamous “A Death in the Family” arc, resulting in a sequence where the Joker bashes the defeated sidekick with a crowbar. Miller would describe it as “the most cynical thing that particular publisher has ever done.” This push for sensationalist edgy content would lead to 1990s events like the crippling of Batman or the death of Superman.

Driven by this push for darker and edgier content, the 1990s would be a turbulent decade for American comics. The industry would expand dramatically and then implode. In December 1996, Marvel declared bankruptcy. Observers placed the blame on gimmicks like “The Death and Return of Superman,” with Chuck Rozanski, the owner of retailer Mile High Comics, describing the event as “the greatest catastrophe to strike the world of comics since the Kefauver Senate hearings of 1955.”

What’s interesting about Snyder’s work in comic book movies is the way in which so much of it seems to dramatize this arc. Snyder’s first DC Comics project was a direct (and incredibly visually faithful) adaptation of Watchmen. The DNA of that project is woven into Snyder’s DCEU. Snyder reportedly considered Watchmen star Matthew Goode to play Superman, which is ironic as Goode is one of the only major Watchmen cast members not to appear in Snyder’s DCEU.

Snyder employed his Watchmen cast in parental or paternalistic roles in his DCEU. In all three films, Carla Gugino voices the Kryptonian AI that mentors Clark (Henry Cavill). In Batman v Superman, Jeffrey Dean Morgan plays Thomas Wayne while Patrick Wilson voices the president of the United States. In Justice League, Billy Crudup plays Henry Allen. The connection goes beyond casting, with the death of Silas Stone (Joe Morton) in Justice League evoking that of Jon Osterman (Crudup) in Watchmen. 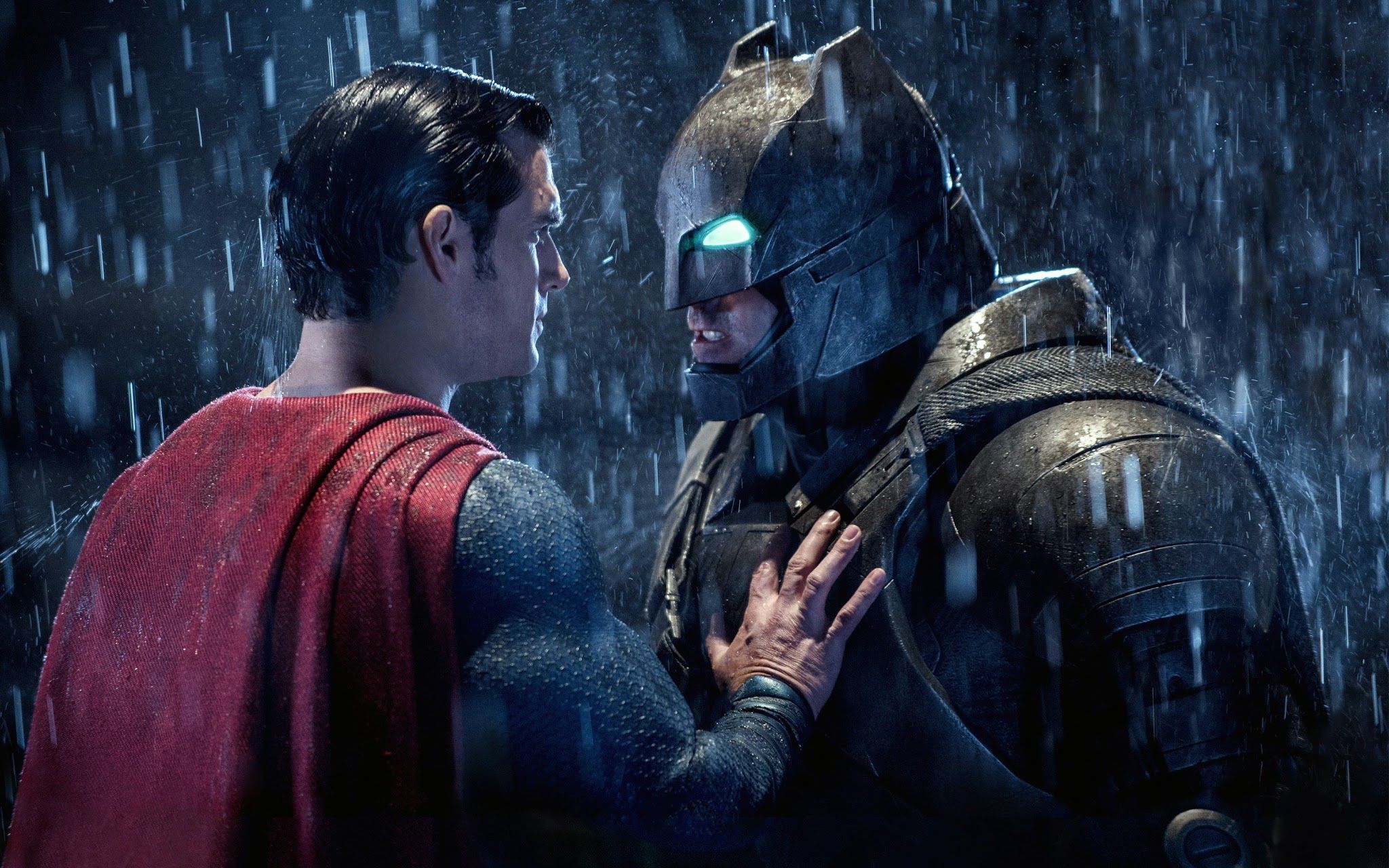 Man of Steel took its title from the flagship Superman book written and illustrated by John Byrne following the continuity reboot in Crisis on Infinite Earths, offering “a more grounded interpretation of the character.” Batman v Superman drew explicitly from The Dark Knight Returns, a comic that Snyder had expressed interest in adapting during the press cycle for Watchmen. Actor Harry Lennix announced Batman v Superman by reading an excerpt from Miller’s classic.

While Snyder was quick to clarify that Batman v Superman was not a direct adaptation of The Dark Knight Returns, a project that still interests him, the film draws heavily from Miller’s classic. Bruce (Ben Affleck) quotes lines like, “We’re criminals. We’ve always been criminals.” Design details like Batman’s armor and plot beats like Superman’s brush with a nuclear warhead are ported over directly. It’s impossible to watch Batman v Superman without thinking of The Dark Knight Returns.

Batman v Superman goes even further than these references. It draws in a lot of the comics inspired by Watchmen and The Dark Knight Returns. There are plot beats lifted directly from “The Death of Superman,” while the movie’s backstory alludes directly to “A Death in the Family.” Batman v Superman is a plunge into the era known as “the Dark Age of Comic Books,” and it ends – like the real era – with the characters broken and battered, the audience exhausted.

However, like the deconstruction of Superman II in Man of Steel, all this is to set up a reconstruction in Justice League. What happened after the chaos of the mid-1990s? The answer lies in the two key influences that screenwriter Chris Terrio would acknowledge on his work, “Obviously Frank Miller is a well-known and respected writer who influences this film very directly. Also writers like Grant Morrison, who asks difficult philosophical questions in an extremely smart way.” 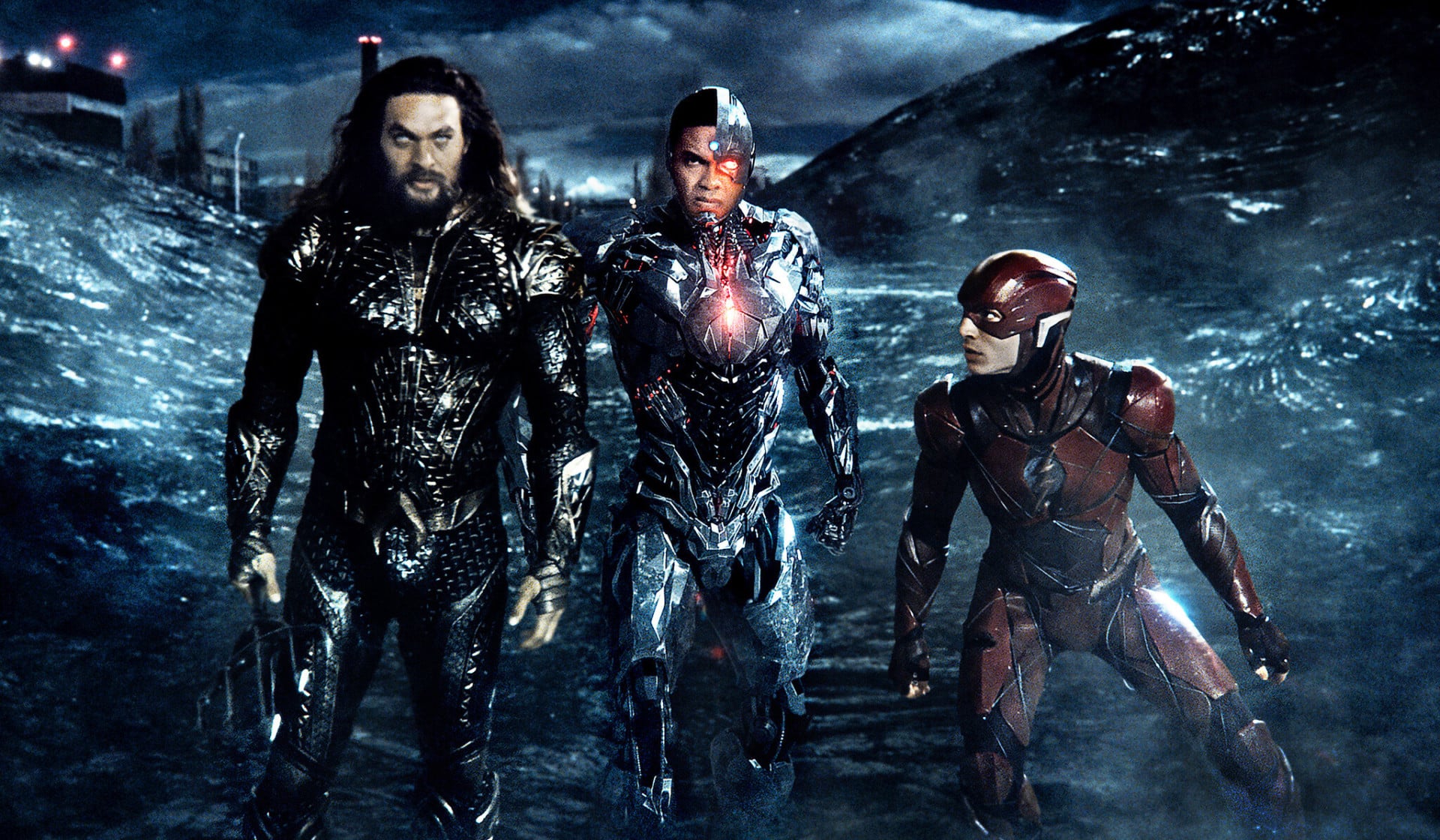 Writer Grant Morrison and artist Howard Porter would take over the Justice League book in January 1997, in the wake of deconstructionist events like “Knightfall” and “The Death and Return of Superman.” The book is celebrated as “a back-to-basics take on superheroes,” with Morrison recalling the pitch as, “Let’s go back to the original notion of this.” It was wholesome and completely unapologetic superhero fun.

Morrison defined themselves (Morrison’s chosen pronoun) in opposition to Moore and Miller, conceding that their early work was “very much a reaction against torment superheroes. Dark Knight is a brilliant piece of Reagan-era fiction and Watchmen is very, very clever in its architecture, but both books felt pompous and concept albumy to me as a young man in the 80s.” Morrison took a provocative stance in an industry where, in their words, “to say that you didn’t like Watchmen is equivalent to pissing on the Pope.”

The team in Justice League heavily resembles Morrison’s team. Jason Momoa’s version of Aquaman resembles none so much as the one who appeared in that lineup. Snyder wanted the resurrected Superman to have a mullet, like the one in that comic. Snyder’s Batman is haunted by visions of a dark future where Darkseid (Ray Porter) has conquered Earth, a recurring motif in Morrison’s stories from “Rock of Ages” to Final Crisis. In Final Crisis, Batman even takes up a gun to fight Darkseid. 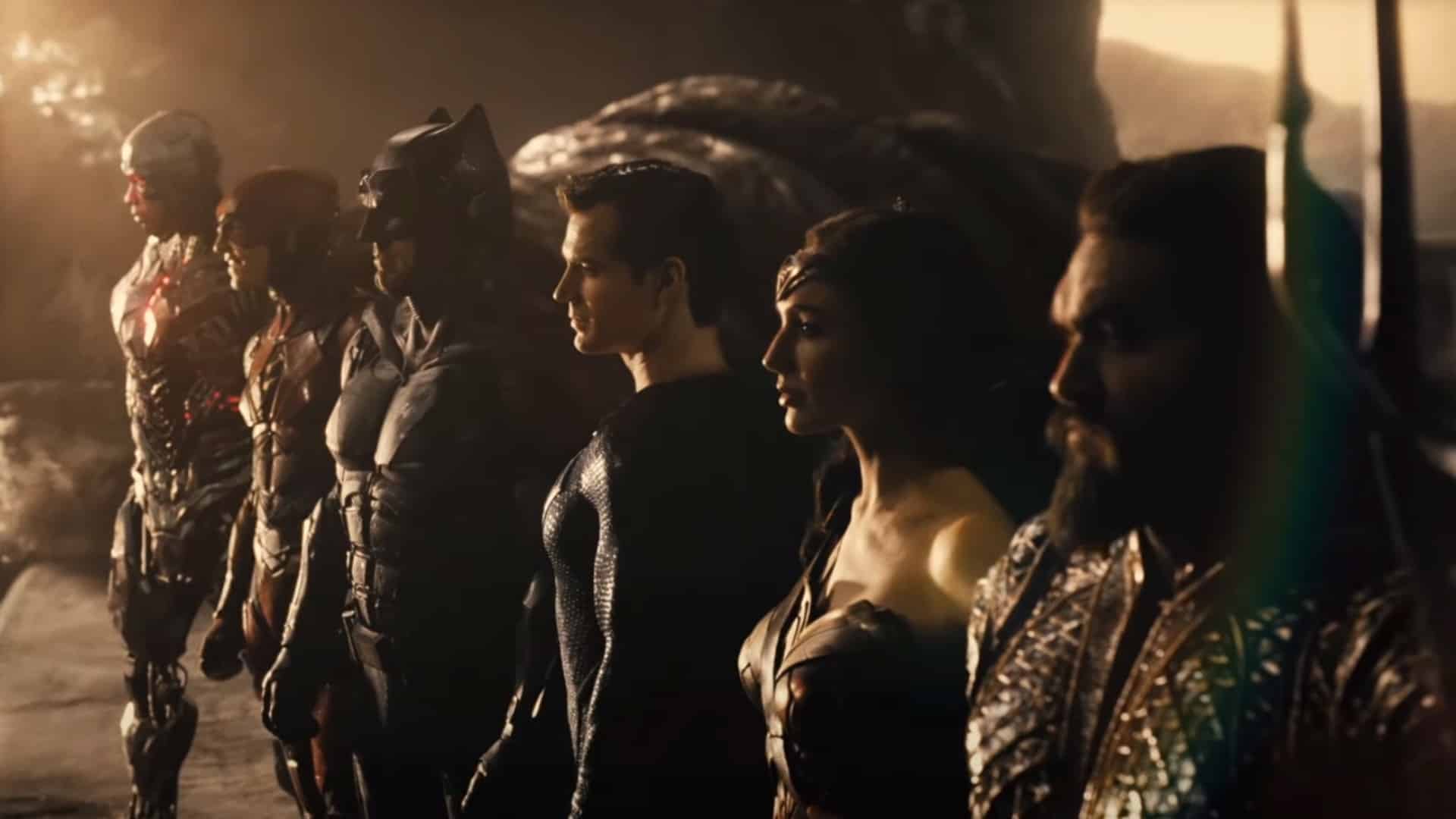 In Justice League, the villains – from a reactionary terrorist (Michael McElhatton) to Steppenwolf (Ciarán Hinds) – are obsessed with bringing back “the dark age” or “the great darkness,” as if to reset comics back to the traumatic and turbulent 1990s. (This is an ongoing concern in comics publishing.) This of itself reflects a recurring literalism in Morrison’s comics. Final Crisis ends with the heroes defeating the personification of the darkness at the heart of comics – and maybe Alan Moore.

Snyder’s Justice League effectively literalizes this journey. Snyder treats comics like Watchmen and The Dark Knight Returns not as the end of superhero archetype, not as some evolved or perfect form of the genre, but instead as something to be moved past and transcended. This is why Snyder positions so much of the core cast of his Watchmen film as parents to this generation of heroes. Justice League is about pushing beyond the boundary many marked as the endpoint of superheroes.

All this is an incredibly intense encapsulation and dramatization of a turbulent period in the history of the industry that spawned these blockbusters, from roughly Crisis on Infinite Earths through to Final Crisis. However, it might also reflect the need of the cinematic superhero genre to evolve and move on from its own fixations arguably typified by Snyder’s own Watchmen. Still, whatever it might mean, it’s a loving trip through two decades of comic book history, rendered as a nine-hour epic.