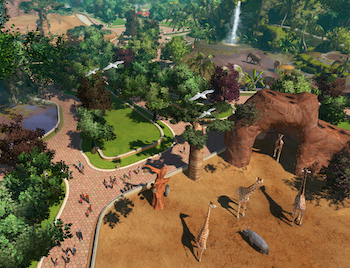 The animal captivity simulator will include multiplayer and Kinect support.

The test of any simulator is the ability to become a capricious god. Rollercoaster Tycoon was fun, but for many gamers, its classic rating comes from the ability to turn coasters into twisting death machines. While Microsoft’s Zoo Tycoon series attempted to blend the popular tycoon genre with environmental education, most players knew it as an E rated Jurassic Park simulator. While the franchise has laid fallow for almost a decade, Microsoft is bringing it back later this year on the Xbox 360 and the Xbox One. Along with the classic sandbox mode, it will include Kinect support and online challenge modes.

While the sandbox mode is returning, it’s getting a few tweaks first. Instead of building exhibits piece by piece, they’ll come as prefab units that players can plop down and then customize after the fact. Depending on their proximity, walkways will automatically be constructed. According to Microsoft Studios manager Jorg Neumann, the idea is that every exhibit will look “beautiful right out of the gate.” After that, players will have to tweak their Zoo to please both animals and guests. If that sounds too simple, there’s also a “hardcore mode” that will presumably make it more challenging.

In addition to that, Zoo Tycoon will also let players directly interact with their captive animals. Using the Kinect, players can feed, pet, or dance with their animals, which Neumann says will create a “deeper connection than ever before”. There’s a good reason that sounds familiar. Zoo Tycoon will be developed by Frontier Developments, the same team behind Kinectimals.

If that doesn’t contain enough substance to captivate its child audience, there’s also a challenge mode, where players compete in various tasks around their zoo, either alone or with others. To make the whole thing educational, players can also access an ingame Zoopedia, which has information on all 101 species of animals, thanks to National Geographic. The Zoopedia can also be accessed on a tablet with the SmartGlass integration.

The new Zoo Tycoon is obviously a kid friendly title, a safe alternative to the horrors of GTA5. If you grew up with Zoo Tycoon and crave a deep, rewarding simulator in which to act out your frustrated power fantasies, you might want to look elsewhere. Dancing with animated animals via the Kinect will not pierce your onyx soul.

Zoo Tycoon will launch on the Xbox 360 and Xbox One this November.