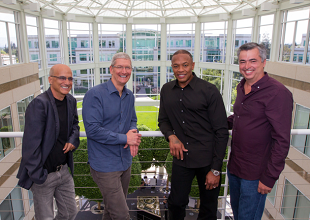 Apple will spend $2.6 billion in cash on the deal, with the remaining $400 million coming as Apple stock.

Update: Apple just confirmed that it will be acquiring Beats Music and Beats Electronics. The buying price is $3 billion, $200 million lower than the rumored number reported earlier this month. The $3 billion will be made up of $2.6 billion in cash, along with $400 million in Apple stock.

Beats co-founders Dr. Dre, and Jimmy Iovine will be joining Apple post-acquisition, but their new roles within the company were not disclosed.

“Music is such an important part of all of our lives and holds a special place within our hearts at Apple,” said Apple CEO Tim Cook in a statement to the press. “That’s why we have kept investing in music and are bringing together these extraordinary teams so we can continue to create the most innovative music products and services in the world.”

Original Story: Apple is about to pull the trigger on one of its biggest acquisitions ever.

Financial Times (account or subscription required) is reporting that Apple is within days of closing a $3.2 billion acquisition of Beats Audio, the music hardware-software company started by Interscope co-founder Jimmy Iovine, and my main man Dr. Dre.

The deal is uncharacteristically big for Apple, which has historically limited itself to smaller purchases. In comparision, all three of Apple’s “major” chipmaker acquisitions — Intrinsity, PA Semi, and Passif Semiconductor — reportedly didn’t cross the $200 million mark.

So why the big number for Beats Audio? For starters, it never hurts to have a popular audio hardware manufacturer under your belt. Whether or not you think Beats headphones are overrated, they make tons of hardware, and tons of cash.

More important than Beats headphones, however, is Beats Music, the new — and struggling — Spotify-esque music streaming service. Music streaming is one area where Apple is weak against competition like Spotify, Pandora, and Google Play Music. With a software ecosystem ready to go, Apple and Beats Music could give each other a serious shot in their respective arms.

FT speculates that the deal will be closed by the end of next week,

From Blasters to Phasers: How Close Are We to Laser Guns?