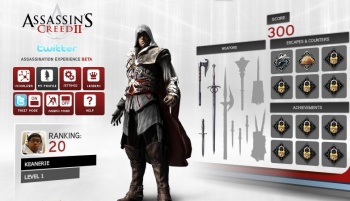 Ubisoft is taking Twitter marketing to the next level with the Assassin’s Creed 2 Assassination Experience, a web game that uses your Twitter account to virtually assassinate other players over the social network.

Here I thought that writing a nasty @reply to someone over Twitter was lethal enough in a figurative sense, but Ubisoft is turning tweets into stabs and slashes with its new Assassin’s Creed 2 promotional web game, the Twitter Assassination Experience.

After you sign up you’ll be assigned “targets” (other Twitter users) who you have to kill by tweeting commands like “@keanerie stabs @Malygris” or something like that. When you successfully take out a target or escape from your would-be killer (you get a few hours to write your @reply), you earn experience and rank up, which will eventually unlock new weapons, counters, escape maneuvers and achievements, which are all tracked on the extremely stylish site for the game.

There’s also an “Aggressive Mode” that allows you to simply click on users on an Animus-esque chart to attack and defend if you’d rather not play the game through Twitter. It’s a lot more fast-paced since you don’t have to wait for whoever you’re trying to kill to get around to checking their account and writing a reply.

The whole thing is nicely presented (if a bit confusing when you read the rules) and a pretty elaborate and innovative way of pushing a game over Twitter, which is inundated with your run-of-the-mill marketing these days.

The only annoying thing is that even if you turn off the damn auto-tweets, you’re still looking at a lot of spam all over your Twitter. Spam and blood, that is. I know some of you guys are on Twitter, so get to killing, people.