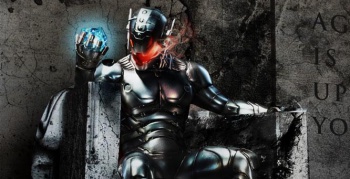 Plot details and even dialogue for the main antagonist from Avengers: Age of Ultron are revealed! Spoilers within.

Just yesterday, we showed you what Ultron will look like in The Avengers film sequel, Avengers: Age of Ultron. And I have to admit, he doesn’t look bad — at least from what we can see. Now, in the latest issue of Entertainment Weekly, we know a few details regarding the story and even some of Ultron’s (James Spader) dialogue. Needless to say, some of the things listed below might be considered spoiler-ish by some, so proceed at your own risk.

According to Chris Evans, who plays Captain America in the super sequel, “A lot of times when Ultron starts talking, it’s beautiful…It’s really intelligent stuff. He’s out to do the things he wants to do because he’s disgusted with X, Y, and Z. You could probably sit down with Ultron and have a really intelligent conversation. He could blow your mind with his views.”

The magazine also reveals part of Ultron’s dialogue that reads, “I know you’re ‘good’ people…I know you mean well… but you just didn’t think it through… There is only one path to peace… your extermination.” Also of note, the magazine feature also confirms that Ultron’s character begins as one of Tony Stark’s (Robert Downey Jr.) “Iron Legion,” which is a team of Iron Man-like robots that Stark is using to continue his heroic deeds in his absence.

Avengers: Age of Ultron cast and crew are presently in London filming the sequel for its targeted May 1, 2015 release.