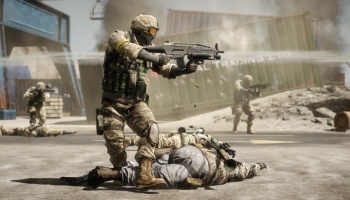 EA doesn’t really care whether Sony beats Microsoft, or vice versa, as either way, it gets more customers.

With Nintendo so far ahead as to be almost uncatchable, it’s the battle between Sony and Microsoft that gets all the attention. But while fanboys work themselves up into a frenzy about their preferred console, EA is busy playing both sides.

EA’s European boss Jens Uwe Intat said that third-party publishers traditionally do better on Sony or Microsoft’s platforms, so while the two companies are both trying to sell as many units as they can, EA profits from a much greater overall install base. He thought that Sony could make a comeback, as the PS3 was very strong in Europe, but said that to EA, it was the fight that that was important, rather than the winner.

The way that Intat describes it makes the console war sound even more like, well, an actual war, with EA supplying both sides so that they can keep on fighting. It seems quite likely that other publishers will feel the same way as EA about the console war, as anyone that makes and releases console games will benefit from a larger install base.