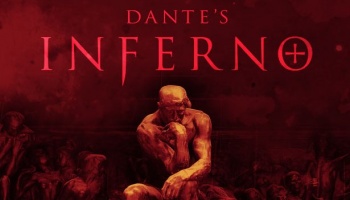 Abandon all hope ye who enter here. Electronic Arts has announced a videogame adaptation of the first part of Dante Alighieri’s epic poem.

EA Redwood Shores, who developed this year’s Dead Space, are behind the “third-person action adventure adaptation” of Inferno. “The time is right for the world of interactive entertainment to adapt this literary masterpiece, and to re-introduce Dante to an audience that, until now, may have been unfamiliar with the remarkable details of this great work of art,” Jonathan Knight, executive producer on the game, said. “It’s the perfect opportunity to fuse great gameplay with great story.”

Details are scant, as to be expected. EA has released a teaser trailer that might light the way to some knowledge about how this is all going to play out. We get a jump-cut filled tour of Limbo and the nine circles of Hell through which Dante and Virgil travel, catching glimpses of some monsters along the way: emaciated zombie-folk, babies with talons for arms, armored demons and more. Finally, we see a wooden wall being chopped down by a fellow lightly armored, wielding a gigantic scythe. The logo appears, and then a brief scene in which the same armor-clad guy slams a cross-shaped dagger into the skull of some poor hellbound soul.

My memory of Inferno isn’t exactly vivid, but I seem to remember it being more about gruesome torment and thinly-veiled revenge fantasy than guys in armor doling out ass-kicking to demons. If EA Redwood is intent on making an “action adventure” out of Inferno, my best guess is that the guy we see at the end of the trailer is Dante, and he’s on some sort of Kratos-esque mission to make it through Hell and kick some demon ass along the way. Of course that’s just my take – we won’t know anything for sure until we get more information. So don’t “abandon all hope” just yet.