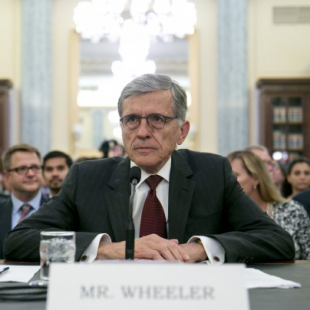 The Federal Communications Commission is about to propose new rules that will allow internet providers to offer faster connections into customers’ homes for companies who are willing to pay for it.

“There is no ‘turnaround in policy.’ The same rules will apply to all Internet content,” he said in a statement reported by the Los Angeles Times. “As with the original Open Internet rules, and consistent with the court’s decision, behavior that harms consumers or competition will not be permitted.”

An anonymous FCC official told the Washington Post something rather different, however. “Broadband providers would be required to offer a baseline level of service to their subscribers, along with the ability to enter into individual negotiations with content providers,” the official said. “In all instances, broadband providers would need to act in a commercially reasonable manner subject to review on a case-by-case basis.”

Wheeler’s statement, “Setting the Record Straight on the FCC’s Open Internet Rules,” can be read in full at the FCC website.

The concept of net neutrality, in a nutshell, is that all content is treated equally; the connection comes into the home and the user does with it as he or she pleases. But a U.S. appeals court ruled earlier this year that the FCC cannot impose restrictions upon broadband providers that enforce net neutrality, effectively opening the door for large companies like Time Warner and Verizon to begin offering preferential treatment to content providers willing to pay for it. And although FCC Chairman Tom Wheeler said shortly after the ruling that he would “fight” to restore net neutrality, today it has come out that he’s actually done the exact opposite.

The FCC will in fact soon propose new rules drafted by Wheeler that will allow internet providers to offer a “faster lane” to companies willing to pay for it, according to sources briefed on the proposals, and to negotiate the terms of those deals individually. Those costs would presumably then be passed on to consumers, either as increased prices for content subscriptions or as added costs at the internet provider level for access to optional, specialized service tiers – an extra $5 or $10 per month for Netflix access, for instance.

The proposed new rules come to light less than a month after the European Parliament adopted a proposal to “enshrine net neutrality in European law.” While it must be ratified by individual EU members, Dutch MEP Marietje Schaake said the proposal “creates safeguards to ensure that players without deep pockets, such as start-ups, hospitals or universities, cannot be pushed out of the market as a result of deals between Internet service providers and content providers to offer faster services at a higher price.”

Prior to his appointment as head of the FCC, Wheeler was a lobbyist for the cable and wireless industry and held positions including president of the National Cable Television Association and CEO of the Cellular Telecommunications and Internet Association. The final vote on the proposal will take place on May 15.