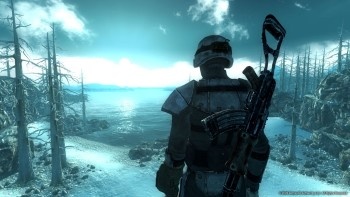 PC gamers are reporting a number of issues with installing and playing the recently released Fallout 3 DLC, Operation: Anchorage.

The problem seems to be that after you download and install the game, and even after the Games For Windows client has told you that it’s been installed, the DLC doesn’t seem to go into effect in-game. Technically, you should be able to wander to a certain spot in the Wasteland, whereupon you’ll pick up a mysterious radio signal that will lead to the new content. For a number of players, however, that radio signal never shows up.

Users have figured out a backdoor solution to the problem, but it isn’t exactly painless. As Fitzycent93 of the GFW Forums discovered, the Operation: Anchorage data is nestled in a folder buried on your hard drive for GFW’s DLC. Once the folder’s found, users will have to copy the files inside the Data folder in their Fallout 3 directory. Then, enter the game and select the Anchorage.esm file to run, and load your save. The radio signal near the Red Racer factory should show up and you’ll be on your way to Anchorage. One catch, though: Achievements won’t be unlocked because technically you won’t be playing through the GFW interface.

Maximum PC, who described the process as “like giving birth,” pointed out that there were two other things that sour the affair even further. First, you’ll need a GFW account to access the content to begin with, which is arguably a headache in and of itself (thought you could get away from dollar-to-Spacebux conversion rates, didn’t you?). Secondly, if you didn’t have a GFW account until now, your saves won’t work. To get your saves to jive with the DLC, you’ll have to copy them all and create a new folder for GFW to access.

According to Microsoft, this problem should be exclusive to people who have Fallout 3 and Games for Windows installed on two different hard drives. When the DLC is downloaded, it installs to the aforementioned folder in the GFW directory. If Fallout 3 is on, say, an external drive, there are apparently problems connecting the DLC to the game files, thus necessitating the janky copy-paste method described above.

Though one user has figured out a method (involving downloading a third-party program) to get the DLC to work if you have Fallout 3 on a separate drive that avoids sneaking past GFW and losing Achievements, some people are still plenty peeved about it all. “Bethesda doesn’t support moving the files but I think they will start rethinking getting into bed with Microsoft…if something as simple as GFW not being able to find a game on another drive is any indication,” GFW forums user ewaldorph posted. “This is all beside the fact that if I wanted to be online or in an online community I’d be playing WoW, not Fallout.”