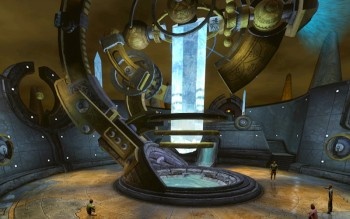 After years of ups and downs that include two cancellations and numerous efforts to keep the project alive, Cyan Worlds has decided to release the Myst Online source code to the public domain.

Originally launched in late 2003 as Uru: Ages Beyond Myst, the game was intended to have a cooperative multiplayer component that would allow gamers to share their exploration of the D’ni civilization. Unfortunately for fans of the series, Ubisoft shut down the online part of the game, called Uru Live, in February 2004, only two months after the game was released. Fan communities then took up the banner in conjunction with Cyan, keeping the game going on unofficial servers known as shards in the Until Uru project, which continued until 2006, when GameTap announced it was bringing the game back to official life.

Myst Online: Uru Live launched on GameTap in February 2007, with content and plot updates released in “episodes” throughout the year. But a year later, in February 2008, GameTap announced that it too was pulling the plug on Uru Live, citing “business reasons” as the cause. Cyan regained the rights to the game and launched MORE – the Myst Online Restoration Experiment – in a last-ditch attempt to keep the dream alive.

But the studio apparently has more important things to worry about these days, having recently been clobbered with heavy layoffs, and has announced that given its current situation it will be forced to concentrate solely on projects that are “fully funded.” Despite its dedication to Uru Live, projects like MORE are simply no longer feasible; as a result, the source code for the game servers, client and tools will be released as open source software, and Cyan will continue to host a single Myst Online data server.

“This is a bit scary for Cyan because this is an area that we have never gone before, to let a product freely roam in the wild,” the company said in the official announcement on its website. “But we’ve poured so much into UruLive, and it has touched so many, that we could not just let it wither and die. We still have hopes that someday we will be able to provide new content for UruLive and/or work on the next UruLive.”

The release of the Myst Online source code is planned in stages, with the first stage of release expected to happen “fairly quickly.” To stay updated about the progress of the releases and learn more about the open source project, keep an eye on the new OpenUru forums.