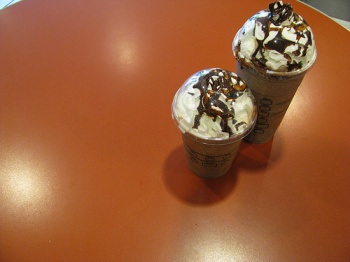 Starbucks is introducing a whopping new beverage size, but limiting the types of beverages that can be ordered in such a quantity.

Until now, coffee retailer Starbucks offered 3 sizes: “tall,” “grande,” and “venti.” The coffee giant is adding a new size, which will hold more than the contents of many human stomachs. The new “trenta” size will hold 31 ounces, or 916 mL of select Starbucks beverages, and will top the current largest offering (“venti”) by 7 oz. To put this in perspective, the average capacity of a human stomach is 900 mL. The National Post has assembled a visual breakdown of this, which can be viewed here.

Only iced coffee, iced tea, and lemonade will be available in the new size, disallowing anyone from getting 31 ounces of hot coffee at once (which, to my mind, would be the only point in introducing a new size). This may be to keep their calorie-based boasts accurate; according to the National Post, “The world’s biggest coffee chain said unsweetened drinks in the new size will have fewer than 90 calories and that sweetened versions will have less than 230 calories.”

The new size is now available in 14 states, including Arizona, Florida, Georgia, Hawaii, Texas, and Virginia, and will be available in California on February 1. You’ll be able to grab a trenta of your favorite beverage — provided you like iced beverages, that is — everywhere in the US by May 3. There’s no word yet on when the new cup will roll out overseas.