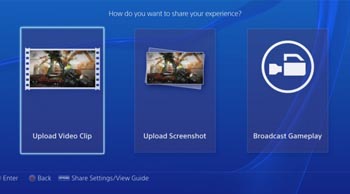 Sony is pleased by PS4 owners’ use of the console’s sharing features.

Almost a month has passed since the PS4’s launch. In this time, the PS4 has add a one-up over Xbox One in terms of gameplay streaming. Sony announced today there have been nearly 800,000 gameplay broadcasts totaling at 20 million minutes of live gameplay streamed from PS4 systems around the world. If you sat down right now, stopped time, and watched through every PS4 livestream, 38 years of your life would be gone.

Sony has embraced gameplay sharing with the PS4. Twitch and Ustream were available from the start, and the DualShock 4 has its own share button. The PS4 share menu has been accessed 10.9 million times since launch, according to Sony. Ustream broadcasts are 31 minutes long on average. Even more impressive is Twitch’s report that 10% of all content broadcast via the Twitch platform since Nov. 15 has come from PS4. In one month, PS4 livestreams account for 10% of Twitch content.

With 38 years’ worth of gameplay sessions streamed, there’s bound to be plenty of less than interesting streams to watch. That said, Sony’s advertising pitting PS4 as “for the players” is another good example of how the company is trying to portray itself positively to consumers. Giving players the option to share their gameplay makes players feel like they can easily show off what they’re doing and gives free marketing to the games.