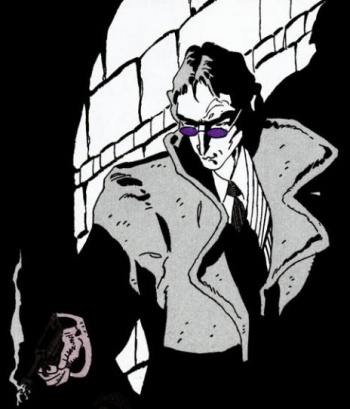 Joseph Gordon-Levitt definitely won’t play Robin, or even a hero at all, in Dark Knight Rises.

Christopher Nolan’s third (and reportedly final) Batman film has been a mystery since its announcement, other than a few character reveals. For yet another, Joseph Gordon-Levitt was confirmed for a role in the flick in February, and now Variety reports that he’ll join Selina Kyle and Bane in the role of Alberto Falcone.

Who the hell is Alberto Falcone, you might be asking? Alberto is the son of Carmine Falcone, the head honcho of organized crime in Gotham City that appeared in Batman Begins. In the comic books, Alberto Falcone was believed to be the “Holiday Killer” (or one of them) from Jeph Loeb and Tim Sale’s Batman: The Long Halloween, where he killed various mob targets on holidays.

It hasn’t been confirmed that Gordon-Levitt’s version of Alberto Falcone will engage in any holiday-killing activities, though Nolan has taken inspiration from comic book storylines before in both Batman Begins and The Dark Knight. The basic plot of Dark Knight Rises is still being kept under wraps.

While Selina Kyle was also associated with the story from Long Halloween, Bane was not. With his super-strength serum, Bane walks the line of being somewhat too “super” for the villains in Nolan’s films, who has stated that he prefers those more realistic. One theory is that Bane could be a mob hitman in Dark Knight Rises, whom Falcone targets, if Gordon-Levitt ends up as a killer. When Nolan actually releases some story information as opposed to a cast of random characters, it’ll be a godsend.

Update: Due to conflicting reports, this story has been labeled as rumor, for now.