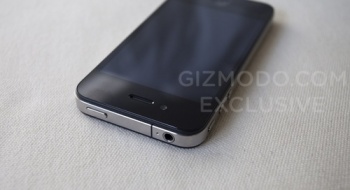 Some unlucky soul at Apple apparently left their 4th-generation iPhone prototype in a Redwood, California bar, where it was promptly returned – to techie press.

Right now, there is an Apple employee – who will probably not be an Apple employee much longer – wetting his pants in terror of Steve Jobs’ wrath. Apple’s newest iPhone model – cleverly disguised as the current 3GS – was discovered in a bar in Redwood, CA, where its owner appears to have forgotten it.

Somehow, it made its way to Gizmodo, who dissected the thing over a week’s time and proclaimed: This is no hoax, it’s the real deal. The device’s authenticity seems to be further proven by news that Apple has indeed lost a prototype iPhone, and is very keen on getting it back. Well, sorry Mr. Jobs, but too late for that.

The new device brings quite a few changes, which Gizmodo helpfully lists:

? Front-facing video chat camera
? Improved regular back-camera (the lens is quite noticeably larger than the iPhone 3GS)
? Camera flash
? Micro-SIM instead of standard SIM (like the iPad)
? Improved display. It’s unclear if it’s the 960×460 display thrown around before-it certainly looks like it, with the “Connect to iTunes” screen displaying much higher resolution than on a 3GS.
? What looks to be a secondary mic for noise cancellation, at the top, next to the headphone jack
? Split buttons for volume
? Power, mute, and volume buttons are all metallic

? The back is entirely flat, made of either glass (more likely) or ceramic or shiny plastic in order for the cell signal to poke through. Tapping on the back makes a more hollow and higher pitched sound compared to tapping on the glass on the front/screen, but that could just be the orientation of components inside making for a different sound
? An aluminum border going completely around the outside
? Slightly smaller screen than the 3GS (but seemingly higher resolution)
? Everything is more squared off
? 3 grams heavier
? 16% Larger battery
? Internals components are shrunken, miniaturized and reduced to make room for the larger battery

So far the verdict seems to be “We like it!” But then again, would Apple faithful really say anything different?