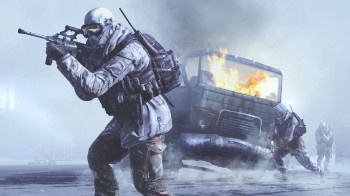 A new survey has found that Guitar Hero 5 and the M-rated Modern Warfare 2 are among the games most wanted by “tweens” this holiday season.

Conducted by Weekly Reader Research and published by Game Crazy, the survey of 1000 “tweens” found that Guitar Hero 5, Wii Sports Resort, New Super Mario Bros. Wii and Mario and Sonic at the Winter Olympic Games were the games most wanted over the holidays by kids aged 8-17. But among boys aged 11-13, the M-rated shooter Modern Warfare 2 makes an appearance, tied for second place with Wii Sports Resort, while in the 14-17 year old bracket it leaps out to the front of the pack. The survey also found that half of boys “often” play a game with an ESRB rating that’s above their age bracket.

The full survey results break down as follows:

It’d be easy to glance at the survey and come away with the impression that an awful lot of kids will soon be playing videogames they shouldn’t be anywhere near, but there’s a big difference between wanting something and actually getting it, or even expecting it. I wanted things when I was that age that I knew I had virtually no chance of getting (mostly the attention of girls); it’s a natural part of being young.

“As Game Crazy’s survey indicates, it’s not unusual for younger kids to want to play what the older kids are playing,” ESRB president Patricia Vance said. “Parents need to understand that not all video games are intended for younger players. The ESRB ratings provide guidance about content and age-appropriateness so parents can make sure the games their kids play are suitable for their age.”

The survey also found that two-thirds of kids plan to ask for a new videogame system over the holidays: 24 percent say they want a Nintendo DSi, while 21 percent want either a Wii or PlayStation 3. A separate, much smaller survey, meanwhile, found that people who use the word “tween” in regular conversation should be punched until they are no longer capable of making noise.