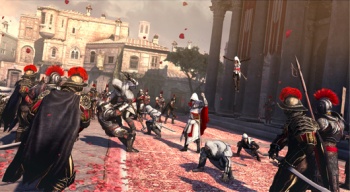 Ubisoft’s European Managing Director Alain Corre says the company is focused on a small number of well-established “key franchises” because only triple-A videogames are profitable in the current market.

Conventional wisdom says that big-budget game development is a risky business. Companies that sink a bazillion dollars into making and marketing a game can find themselves at serious risk if said game fails to meet expectations. On the other hand, there’s no denying that with risk comes reward and one major, Modern Warfare-style hit can be incredibly lucrative. But even more important, in Corre’s opinion, is the fact that it’s the only way to make money these days.

“The games that are not triple-A are not profitable anymore. And that’s changed in the last 18 months,” he said in an interview with GamesIndustry.

“When you have a triple-A blockbuster it costs more money to develop, but at the end of the day there’s also the chance of a good return on it because there’s a concentration at the top of the charts,” he explained. “To a certain extent it becomes less risky to invest more in a single game or franchise than spreading your investment between three or four games. Because if those three or four games are not at the right quality level, you are sure to lose money.”

In response to the changing nature of the business, Ubisoft has changed the way it makes core games. “With hardcore games that we’re not sure are reaching the right level, we stop work on them,” he said. “And that’s why we concentrate more on key franchises, because that’s what the market wants – something new with huge quality production behind it. The market is not supporting the full range of product that it used to anymore.”

It’s not overly thrilling to hear that potentially good new games are being killed because they don’t fit well with focus groups, but it’s hard to argue Corre’s point. The biggest games on the market, and the most anticipated new releases, are consistently either sequels or franchise derivatives. Gamers may sometimes decry the lack of creativity and originality in the industry but when it comes time to vote with our wallets, we go with what we know.