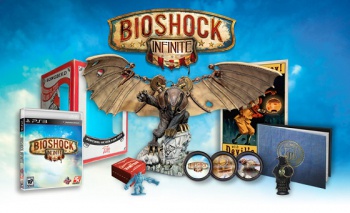 You know what would look great on a shelf next to your Big Daddy statue, Big Sister action figure, and vinyl BioShock 2 soundtrack? How about a 9.75-inch Songbird statue to commemorate the release of BioShock Infinite? If you’ve got a thing for collectibles, you might want to take a look at the BioShock Infinite Ultimate Songbird Edition, which comes with a hand-painted, resin-cast Songbird statue designed by Irrational Games concept artist Robb Waters. It won’t come cheap, though: the Ultimate Songbird Edition retails for $149.99.

If that’s a little too rich for your blood, you can opt for the $79.99 Premium Edition, which also comes bundled with extra content, according to the press release:

All of this premium content will also be included in the Ultimate Songbird Edition.

BioShock Infinite will be out in February, but with the Premium and Ultimate Songbird Editions available in limited quantities, pre-ordering is recommended if you want to snag either of these collections next year. You can reserve them now in North America, and European and Australian gamers can pre-order starting on Monday, October 22.