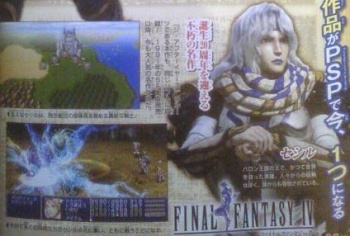 Square Enix is repackaging the entire Final Fantasy IV experience for PSP release, with a little something extra.

Final Fantasy IV was first released in the U.S. on the Super Nintendo as Final Fantasy II, with Square having skipped releasing the second and third NES Final Fantasy titles overseas. It regained its name in PS1 and GBA re-releases, and Square had Matrix Software remake Final Fantasy IV for the Nintendo DS in 2008. Also in 2008, way after Final Fantasy IV‘s original 1991 release, came The After Years on Japanese cellphones, which continued the story of the characters from the original game with classic graphics and gameplay, and was later released on WiiWare in 2009.

Final Fantasy IV: Complete Collection will toss aside the 3D graphics used in Final Fantasy IV on the DS in favor of what looks like a gorgeous 2D upgrade similar to that seen in Final Fantasy and Final Fantasy II for the PSP. News on the collection is still very fresh, so we don’t know if it’ll feature any other additions or changes. It’s scheduled to release in Japan in spring 2011.

I’m pretty excited about the possibility of this coming stateside, even though I already own Final Fantasy IV for the SNES, GBA, and DS. I know, it seems weird. To me, Final Fantasy IV represented a huge jump in console RPG quality over previous generations, including its banging soundtrack, engaging story, interesting characters, challenging gameplay, and forms of travel that featured multiple airships and even a hovercraft. It hasn’t been announced for any other regions yet, but I’ll go over to Square Enix’s offices and make it localize the collection with threat of casting Meteo if I have to. While I’m there, I’ll make sure Square releases a collection like this for Final Fantasy VI too.