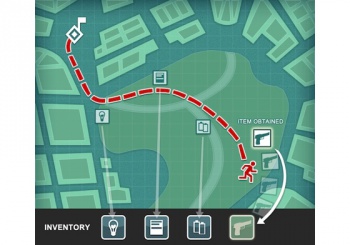 The bigwigs, namely Nintendo, have tried to get gamers moving before. My kid and I were in love with the Pokewalker, a pedometer that came with the Heart Gold/Soul Silver games. It was designed to hold a pokemon within and let it walk with you, and the more you walk, the cooler items – or even other pokemon – you find. I assume it didn’t catch on well, because when the next Pokemon iteration came out, it was incompatible with the Pokewalker. No walkies with Snivy. Sorry, Snivy. You will die of obesity related illness.

Nintendo also gave us, of course, the Wii, which was the destruction of TVs and other devices everywhere. I still have a dent in my Powerbook case where my stepsister slammed the Wiimote into it during Wii Baseball. Even though this new device had some people walking around, shamefully and oddly sore due to a bit of exuberant lightsaber fighting, and some sports stars even were getting injuries playing the games, you didn’t start seeing more toned geeks walking around.

But with Zombies, Run! I get the ultimate incentive to get my ass in gear. Here are ten reasons why:

1) ZOMBIES! YEAH! ZOMBIES! Yeah, I’m one who gets tired when a trope is overused, and every time I think zombies are overused, someone does something fresh (hah. Fresh. Get it? I crack myself up.) Mira Grant’s Newsflesh trilogy, for example, that happens to be an engaging political/medical thriller in a zombie setting. Or Zombies, Run! The zombie apocalypse is here, and the communities keep fuel for generators, so they need good runners to go do their recon and supply missions. They fix up the runners with headsets and follow them on scanners and cameras in the area. That’s where you come in. And when you’re running, and you hear the living dead groaning behind you, you run. The first time it happened, I actually looked behind me. Yeah. I’ll admit that. This stuff isn’t real, but it makes me run.

2) Gotta Catch ‘Em All. To go back to the Pokemon mentality, as you run you will randomly pick up items. “PICKED UP AN AXE, A BOX OF BULLETS, AND A PAIR OF TROUSERS.” You don’t have to stop your running or actually bend over. They just trust you’re that dexterous. You get common stuff, like lightbulbs and bottled water and underwear (the codex on your device assures you that they’re in a package and therefore clean) or less common items like bullets and USB keys and plot-specific items. I get a stupid little thrill of pride when I hear I’ve picked up a lot of stuff at once.

3) Abel Township: Your base of operations. You start out a new person in town with a mission (which is not revealed to you, the runner) and you join their stable of runners as Runner 5. (They offer an official RUNNER 5 shirt, and I’m very close to getting it.) During the run, you have the charmingly nerdy Sam Yao in your ears, guiding you away from zombies and toward your mission specific goals. Sometimes other people come into the sound booth, and that’s when you learn a bit about the plot, especially when the doctor visits. Sometimes other runners will go out with you and keep you company (and perhaps tell you a little more of the plot). When you come home from your run, you can go to your device and put the items from your run into the town, leveling up buildings and unlocking more missions.

4) It Makes Me Run. Really run: I have the Runkeeper app on my phone. I can program intervals where the pleasant voice says, *ding* NEXT INTERVAL, THREE MINUTES, FAST. This notification makes me, more often than not, swear loudly and keep running at my normal pace. I don’t care that the program requires me to pick up the pace. I’m tired and sweaty plodding along is all I have in me. But when zombies are detected, and I hear that groaning behind me, I haul ass. Up hills, at the end of a long run, whatever. Anything to avoid getting caught.

5) The Damn Storyline: Yes, I’m caught up in it. I care about those voices in my ears. I got a thrill every time I unlocked a new mission so I could hear more. I felt the tension with the season ending runs. I nearly yelled aloud when I realized one run would end at a cliffhanger. Is it a “typical zombie story?” Pretty much, but the immersion of me as a key runner within the story is unique enough to keep me interested. People in the township talk to you as if they can see you via scanner and they give instructions You also get the story of Abel through this communication, and you get to meet a lot of different characters. 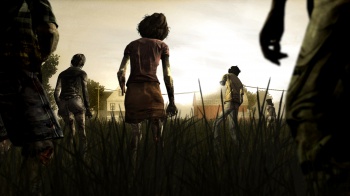 6) It’s Practical: The developers are adamant about safety, and you have the option to turn zombie chases on or off if suddenly picking up the pace would be dangerous. Although the storyline encourages you to “head for those trees!” or “get inside the hospital!” the only thing you really have to do is run your normal course. I did see someone on Twitter ask for more “realistic” zombie chases, ie, the runner would have to switch directions to confuse the zombies, but the developer reminded them that that would be pretty dangerous in a world where no one else knows that you’re being chased by zombies. Or that you’re on a treadmill. Also, instead of eating your brains, the zombies take your stuff when you get “caught.” I really hate it when zombies take my axe. While kleptozoms are not typical of our usual zombie myth, it keeps in mind the fact that you’re going to want to finish your run, and run tomorrow, and being dead (or undead) won’t give incentive for those things to happen.

7) Immersion: I was running to avoid a zombie chase (they last for about a minute, and you’ll get 0-3 during a 30 min run. I’ve never had more than 3.) and I passed another runner going the opposite way. I nearly yelled that she was running right toward the zombies and she should turn and race away like me. But since I don’t want to be labeled the neighborhood crazy lady, I didn’t do this. I also feel a need, when I pass someone walking, to tell them that they should pick up the pace because of what is behind me, but I don’t. I’m not old enough to shout warnings at strangers for no reason. Maybe next year.

8) Music and Audiobooks! You don’t listen to the Abel Township story the whole time. You get a snippet of storyline and then you get a song from a previously chosen playlist. If you are listening to a big file, like an audiobook, the app will fade the story out every once in a while to remind you what is REALLY important in life: running from zombies. The downside to this is when zombies are detected, they chase you during the songs (or audiobook.) I was trying to listen to the novel Mrs. Dalloway while running. I ended up trying to both listen to the description of a fancy garden party and run away from zombies. So I do recommend music over audiobooks while using this app.

9) Affordable: Yes, I said affordable. It’s more expensive than most other apps, at $7 in the iTunes store, but it’s the only app that’s gotten me looking forward to running. I’ve tried Couch to 5K and Runkeeper and Fitbit, and nothing gives me incentive to run, they merely help with intervals or track it when I do run. Now, Runkeeper keeps telling me how I’m hitting new personal records for mileage in runs and mileage in weeks, and I’m losing weight, and my endurance is going up. Yeah, that’s worth seven bucks to me. And I’ll happily pay for the next season’s plotline too.

10) Keeps All Fitness Levels in Mind: You can walk and play since zombie chases require you only to pick up the pace around 10% for a minute. You can run nearly any length of time; once the day’s mission is done, Radio Mode begins and gives you two DJs playing your tunes in a more relaxed, banter-filled style more akin to, well, a radio. You can also run supply missions.

I seriously love this game for being fun and getting me running again. Life is a mental game, and sometimes you need to trick your brain into doing something. Run today? Bleh. Run away from zombies today? Hell yeah, let’s go. Where’s the shotgun?*

Right now I’m done with season one, and I felt a pang of regret that was pretty huge; almost the same pang I get at the end of a console game. What now? What happens to the characters who I think of as friends? When will I get new content?

The team that made Zombies, Run! is apparently at work making season two, and I am waiting eagerly. I certainly hope it is soon, since the first season is at a bit of a cliffhanger.

I think the Zombies, Run! team has succeeded in something no one has before, not even Nintendo; it honestly makes geeks get off the couch. Congrats, team. You deserve a cookie.

* I do not advocate running with a shotgun.