I admit I’ve never been all that sentimental when it comes to old consoles. While some of my thirty-something friends seem unable to part with their precious Atari 2600s or TurboGrafxs, I generally couldn’t care less about holding on to old hardware for the sake of a few good memories. As soon as something new comes along, the old one usually gets packed up and sold at my next yard sale. Atari? Gone. Game Boy? Gone. Dreamcast? Oh, you’d better believe that’s gone. The one exception to my rule is my trusty Sega Genesis. While other consoles may come and go, there’s just something about the Genesis that keeps me from putting the whole collection on eBay. 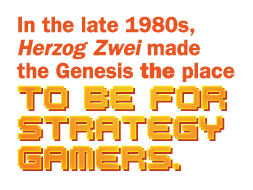 Though the console was eventually known for action and sports games, that’s not why I first fell in love with it. Sure, I was a huge fan of Gunstar Heroes and the surplus of EA Sports titles, and I even love the more quirky takes on those genres, games like General Chaos and Jerry Glanville’s Pigskin Footbrawl, but what really keeps me hanging on is the 1989 TechnoSoft strategy game, Herzog Zwei. Complete with a variety of units, bases to capture, and resources to manage, the game opened the floodgates for the dominance of the RTS genre on the PC.

Given the long-standing supremacy of the RTS on the PC, it’s odd that the genre took its first bold steps on a console system normally associated with Trip Hawkins and Sonic the Hedgehog. It’s true that there were strategy games before Herzog Zwei, but Sega’s 16-bit console was home to the most engaging, most promising entry the genre had seen. Within just a few years, Westwood and Blizzard would take over the genre entirely and move it to the PC, where it still continues to flourish, but in the late 1980s, Herzog Zwei made the Genesis the place to be for strategy gamers.

Players took control of a huge red or blue mech, which could transform between a super fast jet and a rifle-toting robot. As a jet, you could pick up units to change their orders; as a robot you could engage in direct combat with the enemy’s ground forces. Your mech was in charge of a military base where you could buy and resupply units. On the other side of the map was a rival mech in charge of its own base. You won by destroying the other base before he or she could destroy yours. In between the two red and blue bases were a number of neutral bases. As you took them over, you gained more money to spend on new units to send against your enemy, and additional forward bases that your mech could use to purchase and resupply your forces.

This, to me, is still one of the game’s most arresting and, sadly, least imitated features. This wasn’t Age of Empires where you were a god-like manipulator sitting above the action, directing units with a simple click of your mouse. No, in Herzog Zwei you were your avatar and you could only interact with the rest of the world through this one unit. Dune 2 may have given us the control model for the modern RTS, but it seemed positively easy compared to the level of micromanagement required in this Genesis game.

If your infantry needed to be carried across a river of lava, you had to fly them across one-by-one. If a tank had run out of ammunition or fuel on its way to fight the enemy, you had to pick it up and bring it back to a friendly base for resupply. If a self-propelled anti-air gun needed to move its patrol route to intercept the enemy mech’s own supply runs, you had to physically pick up the AA gun and change its orders. This meant your mech’s location on the battlefield was critical. While you were busy building defenses around your base, or building and sending new units up to the front, you weren’t able to influence what was going on elsewhere in the battle. And if you stopped to fight on the front lines, you might have units stuck in the production queue or simply waiting for resupply.

Your physical location on the battlefield really mattered in this game and, since you could only be doing one thing at a time, your attention had to be incredibly focused. Moreover, each new order you issued to a unit cost additional cash, so you had to be very sure about your overall plan before you started telling your troops where to go. You didn’t want to waste money telling a unit to stay and guard a base when the very next second you’d need the same unit to pursue and eliminate an enemy scout. It was a unique approach to strategy gaming that still isn’t seen much today. Outside of quirky games like Sacrifice or today’s various Defense of the Ancients clones, which are in some ways extensions of what Herzog Zwei was doing twenty years ago, today’s RTS games are much more detached, at least as far as the control perspective is concerned.

The one thing your commander couldn’t do was capture neutral and enemy bases. For that, you needed to plop down four or five cheap infantry and give them an order to find and capture the nearest base. Of course, your enemy was doing the same thing, so the question was whether or not to try to grab the bases nearest you but farthest away from being able to do real damage to the enemy? Or did you try to grab the bases in the middle and use them to push your enemy back to his main base? As the infantry clashed and your cash built up, you were able to purchase speedy motorcycles, armored cars, and lumbering tanks. AA guns, turrets, gunboats, and supply units would also need to be part of your roster if you hoped to mount a combined, coordinated attack against a prepared enemy. Even though the formats are different, these are exactly the same considerations that dominate the thinking of today’s StarCraft II and Dawn of War players, and it all began on the Genesis over twenty years ago. 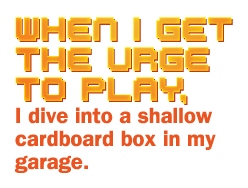 The AI was no great challenge (this was 1989, after all) but the game excelled in split-screen multiplayer. Looking on the other side of the TV gave you all the information you needed to know about what your opponent was up to and knowing made the experience much more intense. Matches could last just a few minutes if your opponent was oblivious enough to let you drop a few infantry down around his main base, but that wasn’t likely to happen more than once. Between two skilled and determined players, matches could (and occasionally did) drag on for hours.

Strategy fans soon moved on to Westwood Studios’ Dune 2 on the PC, and the consoles were left behind. The PC seemed to be a much friendlier place for the nascent real-time strategy genre, owing both to the nature of the platform and the expectations of the PC gaming market. Tragically, despite all it did, Herzog Zwei was considered a failure; it arrived before the Genesis gained widespread popularity, suffered from a rather negative review in EGM, and the less said about its completely unmarketable German name, the better. TechnoSoft eventually closed down, so we never saw a licensed sequel, but the title has enjoyed a bit of a resurgence in popularity over the last decade and has even found a spot on several publications’ lists of the greatest games of all times.

Gamers who weren’t fortunate enough to play the game when it was originally released can still find it on ROMs and emulators but, for me at least, it’s not the same. When I get the urge to play, I dive into a shallow cardboard box in my garage. Inside is my Sega Genesis, a couple of controllers, an RF modulator, and, scattered among a handful of games, my old copy of Herzog Zwei. And that’s more than reason enough to keep hanging on to it. It’s undoubtedly an important first step in the evolution of the real-time strategy genre; perhaps more significantly, it’s also a damn fine game.

Thanks For all the Fish