In the prehistoric 1960s, a thrilling new pet was gaining in popularity – a self-sustaining aquarium teeming with life, advertised under the fanciful title of “The Amazing Live Sea-Monkeys Ocean-Zoo”. Kids saved up and mailed away, only to realize that the ad was comprised almost entirely of lies: not amazing, not monkeys, and not entirely “alive.” What you ended up with was a bag of brine shrimp cysts, cryptobiotically frozen between life and death, just waiting for ideal liquid conditions to start blearily bibbling around, waiting for some monstrous thing from the deep to come gulp them up. For countless children, sea monkeys provided a primer lesson in disaffection. You expect King Triton. You end up with Schrodinger’s Shrimp. 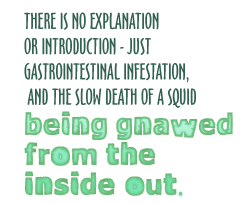 My generation came by a little too late to enjoy this particular brand of cavernous non-fun, but we had something close – our own personal sea monkeys for the gaming age. We had Seaman.

Seaman was released on the Sega Dreamcast in 2000, and remains one of the weirdest games ever to grace the system, or possibly any system at all. The game is described as a pet simulation, which I suppose is strictly correct. It perfectly captures the sensation of raising an animal, so long as your pet has the droopy, furrowed face of a middle-aged man, and is prone to asking you probing questions about life, the universe, and everything. So – nothing like raising an animal at all, in fact, and closer to an alienating trip to visit your great uncle at the old age home.

From the very start, Seaman differentiates itself from other pet simulations. You begin with a tank, mostly empty, inhabited by a solitary nautilus that swims aimlessly about. But this is not your pet – this is fish food. The eponymous “seamen” start as parasitic worms that burrow and incubate inside the hapless creature until they burst out as fresh-faced fishies. There is no explanation or introduction – just gastrointestinal infestation, and the slow death of a squid being gnawed from the inside-out.

This matter-of-fact explosion of aquatic life manages to elude the many niceties of pet ownership. It skips the trip to the pet shop to agonize over a kennel full of doe-eyed cuties. No picking and choosing, no watching them all run about, no promise that you and your new companion will be best buds forever. The standard pet-game values of friendship, codependence and responsibility are likewise nowhere to be found. In Seaman, there are no choices. Rather, “they” choose “you”, at least as much as they chose that squid. You catch them like the clap. The creatures that emerge are not predisposed to giving you their unconditional love – rather, you’ll be lucky if they don’t hate your guts.

There are certain duties that you must perform – the tank’s temperature must be tended, the pond scum must be skimmed from the top, and every now and again the seamen require a sprinkle of food. But mostly, there’s a lot of waiting. This might be said to be the central aspect of most aquatic pets’ lives: you can only swim around the same few feet of water before it begins to repeat itself. Mostly, they just want to talk. Much of the gameplay hinges on interacting with these creatures via a microphone, as the tank’s inhabitants recognize certain words and phrases and remember them for later. The seamen don’t so much interview as interrogate – how old are you, and when were you born? What’s your sign? Do you have a sweetie? These exchanges are carried forth in a lugubrious, droll tone, like George Takei with gills. Normally getting to know your pet is a wholesome enterprise, but these back-and-forths always seem to smell faintly septic – it may be because there is no question, no matter how innocuous, that fails to become strangely suspicious when asked in a tone of voice more suited to inviting random kiddies inside for lollipops. And it doesn’t help that the seaman takes to calling your girlfriend your “love biscuit,” because, ew. 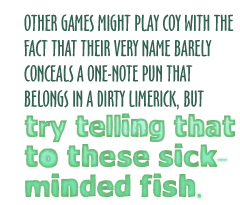 The seamen themselves don’t seem too worried about being polite. They hector you constantly, they insult your intelligence, they grumble in perpetual displeasure. The very duties of living out a life seem to them like an awful chore. There are a few exceptions – once they’re old enough, and matured from little tadpoles into grotesque man-fish-frog-things, eventually they’ll be ready to mate. It is like nothing you’ve ever seen, except, perhaps, in the darkest recesses of the internet: One swims overtop another, and the bobbing flagella that protrude from their heads schlup together to form a continuous hose. Then, fluid bulges like from those old Looney Tunes cartoons begin traveling from one’s head to the next, while the seaman murmurs, orgiastically, “Ooh. That feels goooood!” This act of course opens itself to all sorts of biological questions: Is it homosexual if every seaman seems male by default? Is it bestiality if these creatures are both human and fish? And perhaps most importantly, if this is a beautiful part of nature, why do I feel so icky?

It seems bizarre that a published game might get away with graphic animal sex acts, complete with wacky sound effects, impassioned man-moaning, and a little slap and tickle. Perhaps it’s proof that we’re a little more tolerant of “the birds and the bees” when it happens to the fish and the frogs. As an act performed by lesser orders of life, it seems robbed of tension and taboo – just another messy fact of primordial life. Way before there was Hot Coffee, there was Microbial Soup.

The seamen, for their part, don’t seem wound up by outdated Victorian formalities. Sex is just like a handshake to them … a handshake where one person dies immediately afterwards, and the other wanders off to excrete eggs from his forehead. The daddy-to-be even has time for a little humor on his way out, cackling, “Might as well leave a few little … seamen … behind! Heh heh heh. Get it?” Well, of course we get it. It’s just weird that he does. Other games might play coy with the fact that their very name barely conceals a one-note pun that belongs in a dirty limerick, but try telling that to these sick-minded fish. Stay classy, you miserable brutes.

But strangely, within the whole grotesquerie cycle of these creatures’ horrid lives, there’s an interesting idea at work. Each seaman, newly burst from some dripping sac, seems to share a conscious mind. They all have the same facts and figures memorized, they all seem to have the same habit of spouting inane trivia at the slightest provocation. Even throughout their quickened evolution from tadpole to fish to human-headed frog, they exhibit the same constancy and like-mindedness. There might be a very real reason that seamen have no time for love and relationships, or for musing on life and death – they might all be the same creature, only spread out, infinitely, across generations and gestational forms. Maybe it’s a Jungian preconsciousness that links them all together – or maybe it’s some version of cloning that passes everything, even knowledge, down from one generation to the next. If that’s the case, it explains a lot of the creatures’ general disenchantment with everything – if you were an antediluvian ur-creature whose consciousness spanned from the first warm pools of life on this planet, you’d probably run out of nice things to say at some point, too. 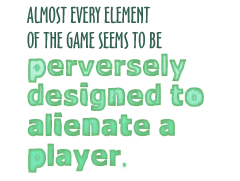 Because beyond the strange, caustic humor of Seaman, there is another difference that sets it apart from other pet simulation games. It becomes a question of perspective, and of scope. In the dutiful pursuit to raise, care for and love a single animal, we are taught that life is sacred and that one of our finest pursuits is to nurture and protect it at every cost. Pets serve as extensions of family – we feed them and shelter them, and are meant to learn something of ourselves – the things we need, and demand, from those around us since we were small. But Seaman posits a different sort of life – one that is indifferent rather than precious, one that soldiers on, tomorrow and tomorrow, far beyond the individual flickers of life that we’ve become so attached to. From this way of thinking, we are not sacred. We are fish food. This is a fascinating mindset, but not one usually suited to the safe spaces accorded to us in our games: a reason, for example, why there is no Nintendogs “Old Yeller” edition. Separating these ideas is the fractious boundary between ‘life’ and ‘Life.’ The lessons we receive from a new puppy and an ant farm are different, incompatible things.

Seaman was not a huge success in the U.S., and it’s not hard to see why – almost every element of the game seems to be perversely designed to alienate a player. Instead of a doe-eyed Pokémon, you’re saddled with dead-eyed baby-mans who ask probing questions when they aren’t ripping out each other’s throats. Instead of cute and cuddly, you get chimeric, cannibalistic, and caustic. Maybe a game this odd only benefits from being a relic, a coelacanth on some outdated piece of machinery. In our current gaming era of triple-A sequels and IPs mined to death, is there really any room for a game that full of ambivalence, even hostility, towards the person holding the controller?

At the very least, it’s in this obsessive devotion to awkward conversational unease that Seaman succeeds beautifully as a simulation. Because a dog is a friend for life, and a cat will at least care enough to ignore you.

But fish? Fish just don’t give a shit.

Brendan Main actually had occasion to meet that lass from St. Stephen. And while it’s true that she did “set up with a seaman named Freeman,” the rest is a filthy lie.