0
“How you’d exult if I could put you back
Six hundred years, blot out cosmogony,
Geology, ethnology, what not …
And set you square with Genesis again.”
– Robert Browning, poet

You don’t plan to fall in love. It just happens. It happened to me once, a long time ago … Well, it’s happened a lot, actually, most recently a few years ago when I met my wife, but let’s stay focused here. We’re talking about the decade before the turn of the century, and the time I fell in love without even wanting to. Without even suspecting it might be on the horizon. Without another person, even. 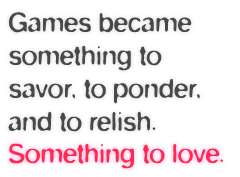 OK, let’s back up a bit. Like a lot of folks, I had a Nintendo NES machine in my bedroom when I was younger. It wasn’t my first game machine – nor would it be my last – but it held a special place in my heart as I struggled to find myself during those often cruel and incomprehensible high school years. I had friends and extracurricular interests, so I was frequently out of the house, but on rainy days, when friends were out of town, or when that one girl who last week had meant the world to me was no longer returning my calls – I had the NES and its vast, exhilarating catalog of 8-bit game experiences.

I grew up with games. We always had them around. We had a Magnavox Odyssey, a Fairchild Channel F, a ColecoVision and various rudimentary handheld games with flickering LCD lights. When I wasn’t gaming at home, I was in an arcade, dropping quarters into Dragon’s Lair or Star Wars. Or I’d be at my friend Doug’s, playing Gunship on his Commodore 64.

Games, in other words, were always with me, but the NES was different somehow. These were the years when video arcades still represented the pinnacle of gaming, and the NES ports were often pale imitations. But the new 8-bit console offered something the arcades never had: long-term, immersive experiences. NES save game codes and cartridges with batteries gave console gamers like me our first glimpse of multi-session gaming, and there was no going back.

A game could take hours to finish, but you could play it minutes at a time. We take this feature for granted now, but at the time it was wholly new and radically changed the way we played and the way games themselves were made.

This carry-over allowed games to evolve into something more than a waste of a few minutes at a time on a Saturday, or something to try to rush through in one gulp like Halloween candy. They became truly immersive experiences, capable of sustaining interest over long periods of time, like books. Experiences that carried over from session to session, day to day, year to year. They became something to savor, to ponder and to relish. Something to love.

***
“In Genesis, it says that it is not good for a man to be alone; but sometimes it is a great relief.”
– John Barrymore, Actor

Now comes the part of the story in which the Velveteen Rabbit slowly becomes “unreal.” Or, more to the point, gets sold for beer money. And by “Velveteen Rabbit,” I mean “my NES.” 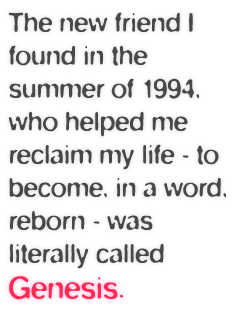 I moved away from home in 1993 to attend college and live with some girl. The NES lived in my dorm room for a while. I even, briefly, developed a Nintendo Ice Hockey obsession, but the demands of academic life slowly took over and gaming briefly fell off my radar. I sold the NES to a pawn shop, yes, for beer money. I regretted the decision almost instantly.

A year later, I was back home, living with my parents. Back in the town where I grew up. Back to not knowing what I was going to do with my life or how. I spent a good solid month revisiting old haunts and looking up old friends, but most of my cronies were gone, having moved off in pursuit of their own degrees or on whatever wild adventures tickled their fancies.

Having failed at moving on, I’d returned home for a taste of comfort and familiarity but there was none to be found. I was alone. My girlfriend had left me, my friends had gone away and my once-trusty companion, my NES, was being played with by another (or so I imagined). Somehow, this hurt worse than my girlfriend telling me – on the phone – that she’d found another lover.

I believed I was, to put it melodramatically, at rock-bottom. But I was 19. Everyone thinks that when they’re 19. Still, it was bad. I needed a job and couldn’t find one. I needed to make plans to attend another school, but all I could think about was the emptiness in my heart. I was a wreck.

That’s when it happens, though, you know? In all the stories, the romantic comedies, the books and TV shows? When our hero is at his lowest, an angel comes and lifts him to his feet. And that’s how it happened for me. And by “angel,” I mean “game console.”

The new friend I found in the summer of 1994, who helped me reclaim my life – to become, in a word, reborn – was literally called Genesis.

Imagine if one game company could mesh the exhilaration of cutting-edge arcade-quality videogame experiences with the deep, immersive, replayability offered by a home console. Now imagine you are living in a time when this hasn’t already happened and you pick up a new gaming console to discover – BAM! – your wildest dreams came true when you weren’t looking. That’s what it was like to come back to gaming in the mid-90s. The 16-bit console generation bridged the gap between consoles and arcade machines, led mainly by the company with more machines in the arcade than almost any other: Sega. 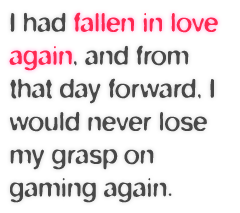 While I was away at school, my stepfather had bought a Sega Genesis game console. He had only one game for it: Desert Strike, the arcade-like helicopter shoot-em-up. I don’t think he ever got past the first level, or even knew there were more levels than one. As far as he knew, the only point of the game was to fly around and blow things up. Sometimes, pick up guys. He’d fly around for hours, looking for things to shoot until he died or ran out of fuel (Return to frigate!), then he’d get bored and go back to work.

For my stepfather, the Genesis was a curiosity. It was an arcade cabinet in miniature. It was something to be enjoyed for a few idle moments, then left alone, like the arcade games of yore. Like the Asteroids cabinet he had in his office, in fact, which mostly collected dust. But to me the Genesis was something wholly different than that. Yes, it contained the power to reproduce most arcade experiences with the same performance and graphical excellence as you’d find in the arcade, but the 16-bit Genesis was also a modern game console, carrying on the tradition of the NES. And this meant long-term, immersive play experiences. Better, it meant arcade-quality, long-term immersive play. I was smitten.

My career as a gamer had previously been prevented from drawing me into a full-bore obsession by two things: 1) Although going to the arcade was one of my favorite things in the world, going to the arcade meant having to leave the house and actually go to the arcade and 2) Playing games on a home console was great except that they usually weren’t as much as playing them at the arcade. Suddenly, with the arrival of 16-bit consoles like the Genesis, the path had been cleared for my obsession to blossom. And blossom it did.

I blew my stepfather’s mind one day by finishing Desert Strike in one sitting. From then on, the Genesis was mine. He would sometimes watch me play, but most often I was on my own with the device, playing games that ignited my imagination and opened my eyes to innovative new ways of play. Games like Desert Strike (and its sequels: Jungle Strike and Urban Strike), Flashback, Earthworm Jim, Prince of Persia and of course Sonic the Hedgehog. I played movie tie-ins that, in spite of their “licensed game” stigma, were actually pretty good, like Jurassic Park and Disney’s Aladdin. And I played a slew of Sega arcade ports that were astonishing in their similarity to the games in the arcade cabinet.

Most of all, though, I spent hours, days and weeks soaking in the high-caliber interactive entertainment, chewing my way through the absolute newest and best videogames ever made (to that point) one session at a time. I had fallen in love again, to put it poetically, and from that day forward, I would never lose my grasp on gaming again.

For me, the Sega Genesis was a true-to-its-name new beginning for My Gaming Life. I eventually did get a job that summer of 1994, and then promptly saved my first few paychecks to buy a PC – for gaming. More gaming PCs followed, as did a number of new consoles: Dreamcast, GameCube, Xbox, Xbox 360, PS3 and then Wii. I flirted with a few handhelds as well, although none were more than mere dalliances. I even now have games on my cell phone, which didn’t even exist when I started gaming! 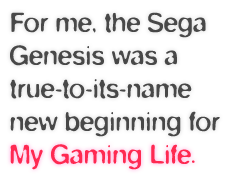 Yet in spite of the plethora of modern gaming options, gaming, for me, will always be about leaning back and sinking in to a deep, immersive experience. Letting myself slip into another world, and experiencing the joys of interactive escapism. Someday a phone may offer that kind of experience. Hell, some day you might play immersive interactive games with a pair of glasses or a monocle plugged directly into your brain, but for now, that magic comes out of a desktop machine or a set-top box.

Once upon a time, to experience the pinnacle of gaming required one take a trip to the arcade and a pocketful of quarters. Genesis changed all of that. It caught me when I least expected it, snuck up, reawakened my love of gaming and changed the entire course of my life. That’s “the power of creation,” to once again quote Captain Kirk. Or, to quote Huey Lewis, “the power of love.” But let’s just call it “The Genesis Effect.”

Thanks For all the Fish