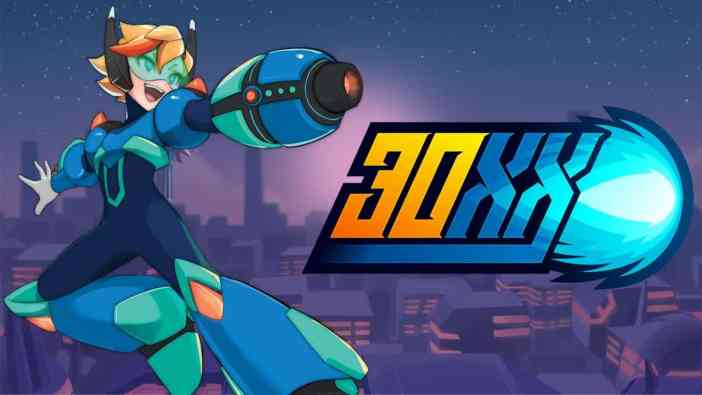 30XX is impressively (and almost shamelessly) inspired by the Mega Man X and Mega Man Zero series. It’s filled with fun weapons, precise wall-climbing and jumping over stages filled with hazards, and wild bosses. It’s not just a copy, though. Within its sharp pixel art and captivating soundtrack, it builds on the formulas through adding the ability to mix weapons to concoct new attacks, a roguelike mode that keeps things random and unexpected, and a co-op mode for online and offline players.

Co-op Mega Man X is not something I knew I needed in my life until I tried 30XX with my spouse. Dashing through stages and blasting machines while dodging deadly traps is something that’s deeply compelling already, but adding another person brought so much more enjoyment to it. There’s the simple pleasure of laughing and enjoying a game together. There’s those moments when your friend is in danger and you leap in to save the day, the times when one of you falls and leaves the other to take out a boss all on their own (and surviving with the tiniest sliver of health).

30XX is a constant, pleasant reminder that games are always better when you can share the fun. When you pull off those narrow victories together and/or create a story to tell one another, it makes for some of the best times you can have with games. Likewise, someone might become a good friend over the course of an online match. 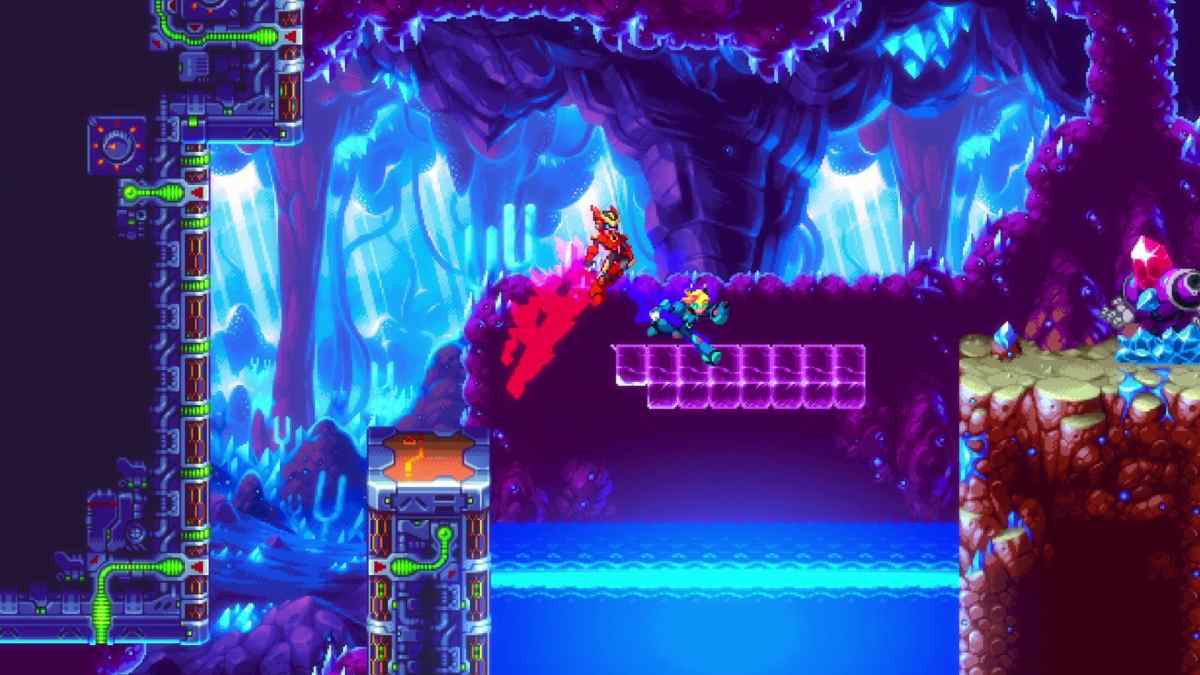 The challenging nature of 30XX brings out the desire to work together and help one another. Death comes with a high cost in this roguelike, so neither of you will get far if you don’t keep each other in the game. This might mean throwing yourself into danger to absorb hits that could take your partner out, or deftly rushing through hazards to keep up with your partner – moments where your skills under pressure might surprise you. My character’s feet would barely touch the ground as I dashed in to help.

The possibility of imminent death can bring up an unwitting feeling of competition as well. My partner decided to hurtle through every stage, and as a Mega Man veteran, I was powerless to refuse this wordless challenge. We took way too many risks in trying to outdo one another, making a challenging game even harder. All those tight escapes made for play that was utterly exhilarating, far more so than the main game could muster when played alone.

Co-op uniquely enables this sort of shared storytelling. I still share stories of snatching victory from a relentless invasion in Dark Souls or in dredging my friend back from being downed in Gears of War (more that he saved me though, to be honest). There was also the time my brother and I were playing Super C and everything suddenly clicked, seeing us finally reach the last boss after weeks of trying. When I visited him in Japan, we spent a week amongst the explosions and insect mayhem of Earth Defense Force 2017. So many great stories we still share came from the time we spent in those games. 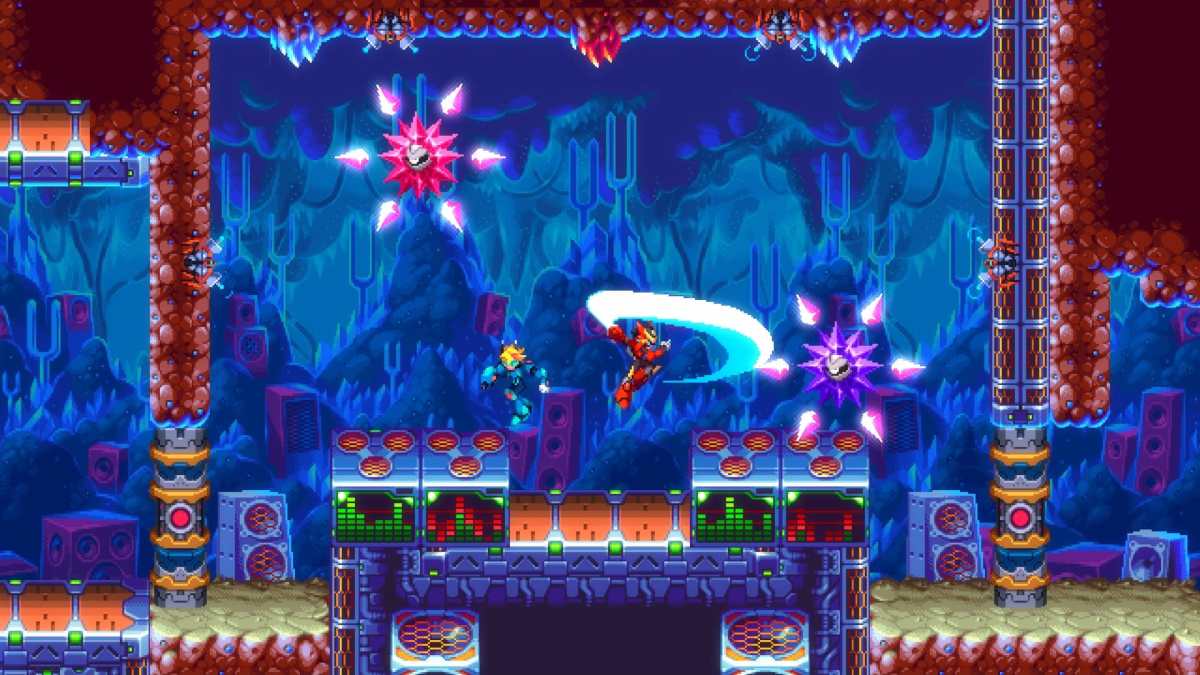 Colossal goof-ups create those same stories you remember forever, too. Not everything is heroism, skill, and success. Moments I blundered into the same sets of spikes over and over, or when I missed my jump and threw myself face-first into a boss, made for some silly things to share about my shared time with 30XX. Likewise, Phasmophobia has arguably built up a massive YouTube and Twitch following not just from its fun cooperative ghost hunting, but also through the silly things that happen when players get chased by the undead together. The screams, the backstabbing, and the failed runs become a source of laughter that enrich the whole experience.

This makes failure feel less agonizing in turn. I get frustrated easily, so dying after a pretty good run at 30XX could put me in a sour mood. Having someone else to laugh at it takes the pressure off though. It feels good to be reminded that this is something I choose to play for fun — and that part of that fun is in laughing at yourself when you screw up. I don’t think I’d have put as much time into Phasmophobia, for example, if my friends and I couldn’t laugh about our blunders.

Playing in co-op can even lessen the frustration when the game itself is the reason things are going wrong, as can be the case in an early access title with bugs like 30XX. This same energy can make almost any game a good time, which I can vouch for through streams spent playing Cheetahmen II and the NES Dragon’s Lair. Those aren’t even co-op games, but playing them with other people around and finding ways to laugh and have fun with them together made their normally irritating quirks into something that created fond memories of times with friends. 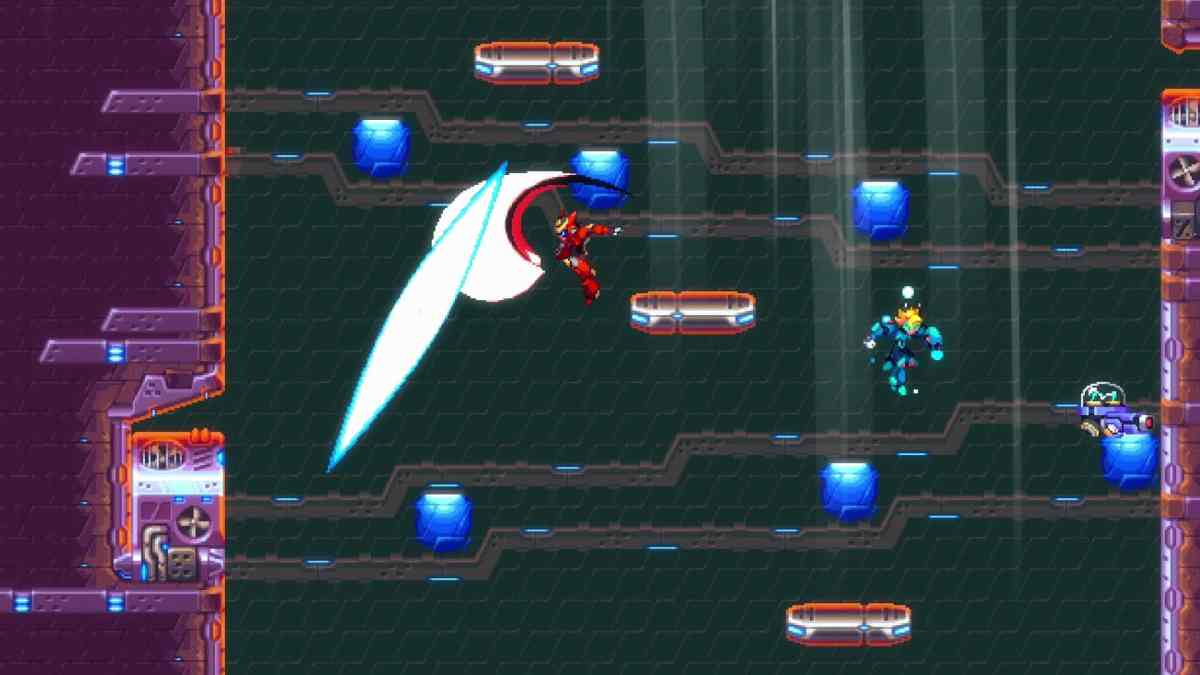 30XX in particular finds a way to enhanced the shared fun even further with a level editor. It’s always a shame when a game you love runs out of content, and though 30XX works hard to keep things fresh, it’s bound to run out of surprises eventually. As we’ve seen with games like Super Mario Maker, Dreams, and LittleBigPlanet, players are a creative bunch who continuously add amazing things to games. With 30XX’s level editor, we’ll likely see many great things created by the community, giving the game a longer life through the work the players put in for people they’ve never met and will never interact with.

The Mega Man X and Mega Man Zero games feel like titles I’ll pick up every few years for the rest of my life. Even so, I don’t have memories of them that are quite as vivid, or moments as fun to share and retell, as I’ve had with my time in 30XX’s co-op. It’s always those co-op moments in games that have stuck with me, and it’s those moments playing with my friends that I’ve treasured the most. Co-op games are the ones I’m always looking to replay, hoping to find new moments of mayhem, humor, and heroism among friends new and old. Playing together shows me video games at their absolute best.