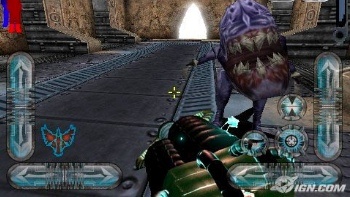 Exactly how compelling is the gaming element of Apple’s iPhone? It’s 2009 and it just made Prey a headline in a news story. No further explanation required.

The most successful of iPhone games all tend to have the same elements in common. They’re extremely accessible to players of all skill levels (ESPN Cameraman, Tap Tap Revenge), make good use of the device’s touch or tilt functionality (Fieldrunners, Rolando) and they provide quick, diversionary fun that simply can’t be found on other platforms (Dr. Awesome, Snail Mail). Do you know which genre of video games tends to rebuke all of these qualities? First-person shooters, which explains why you can count the FPS games available for the iPhone on one hand. Of those currently in existence, most tend to fall into the rail-shooter category, such as Konami’s Silent Hill: The Escape and Namco-Bandai’s Time Crisis Strike, which handles all movement for the player, leaving the ability to shoot as their only option.

Mobile developer MachineWorks Northwest is looking to change all that with a version of 3D Realms’ Prey, in what appears to be the first serious attempt at an FPS on Apple’s device.

You remember Prey, right? The story of a former US Army soldier living on a Native American reservation in Oklahoma who uses his Cherokee spirit to save his girlfriend from a horde of intergalactic aliens. No? It also had portals, way before, err, Portal, only they were more like doors and less like, uhh, portals.

Anyway, having already constructed Prey and another 3D Realms favorite, Duke Nukem 3D, for other mobile platforms, MachineWorks seems well versed in squeezing down the mechanics of your average first-person shooter down to a portable device. Prey for the iPhone uses a series of on-screen sliders to move about the environment, along with buttons to shoot, changing weapons and of course, getting your spirit walk on. From IGN’s preview, the iPhone version sounds quite faithful to the original console and PC release, with all the zero-gravity wall walking and spirit worlds that I remember, though there does seem to be a distinct lack of portals being discussed.

Judging from the screenshots, MachineWorks is definitely making the iPhone work for them, though the real challenge (aside from the controls) is getting a game this nice looking to run at a decent clip on Apple’s phone. Games that feature a hefty amount of 3D tend to get pretty chunky on the iPhone, so I look forward to seeing this in the App Store when it releases in a few weeks time.