Ah, Christmas – a time of laughter, of family, of getting too drunk at the annual office party and hitting on Jane in accounting before the ink has dried on her divorce settlement. Magical, isn’t it?

But for some of us, Christmas only dredges up memories of sadness and disappointment, especially when forced to deal with the soul-crushing cheerfulness of the holiday’s cinematic offerings. I’m not talking about your Christmas Vacations or even your claymation classics, I’m talking about the relentless onslaught of Lifetime and Hallmark channel originals that your mom, aunt, or weird Uncle forces you to watch every year. I’m talking about those made-for-TV atrocities saccharine enough to give you diabetes. I’m talking about the entire post-Full House canon of Candice Cameron Bure.

Thankfully, there has been a change in the air this season, a shift away from the overwhelming white (in every sense of the word), feel-good movie selection that we’ve been force fed all of our lives. A shift toward darker, more insidious Christmas fare. I’m talking about movies like Krampus, which blew away expectations earlier this month by both opening to mostly positive reviews and even better box office returns. So to celebrate Krampus‘ success and usher in a new era of era of holiday movie-watching, here are 5 other Christmas films that go against the “feel-good” grain. 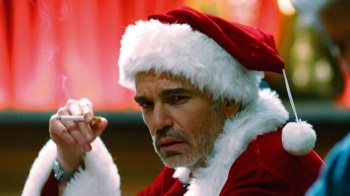 A raunchy black comedy that requires no introduction, Bad Santa is perhaps the crown jewel of “anti-Christmas” Christmas movies, and for good reason. It’s got everything: Billy Bob Thornton as an alcoholic, womanizing, low-level criminal, a naive and nerdy pre-pubescent sidekick he picks up along the way, a Santa fetishizing bartender, Tony Cox punching kids in the junk, and John Ritter in his last on-screen movie role. One can only imagine how the sequel slated for next Christmas will play out, but I’m going to make a bold prediction that it abides by the Three B’s of the first film: Booze, bullshit, and buttf*cking. 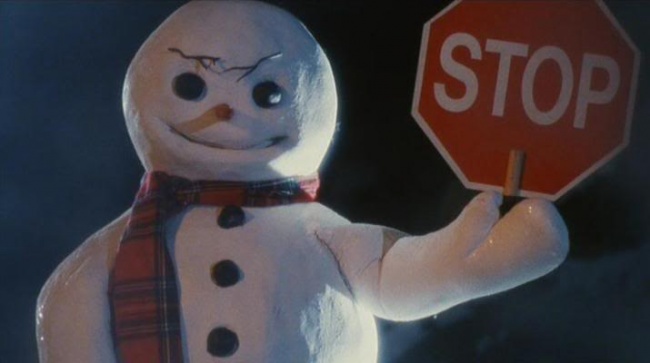 4. Jack Frost (no, not the Michael Keaton one. The evil snowman one.)

It’s a question as old as time itself: What would happen if Frosty the Snowman was fused with the acid-scorched remains of a serial killer? The answer: 1997’s Jack Frost, the “mutant killer snowman” horror-comedy to top all “mutant killer snowman” horror-comedies. Shot on a budget of approximately $8, Jack Frost is the perfect kind of B-movie that never takes itself too seriously (for obvious reasons) while hitting a lot of the beats that fans of schlock cinema can appreciate – presumably while baked out of their mind.

My suggestion for optimal viewing: gather up all your little cousins at the family party, maybe under the false pretense of watching “this new Frosty movie,” and then watch them run for their lives as a naked Shannon Elizabeth is bludgeoned to death against a bathroom wall.

If you’re looking to break away from the sappy schmaltz and dive into a true cult classic this Christmas, you can’t do much better than Silent Night, Deadly Night 2, aka the movie that gave us the now-infamous “Garbage Day!” scene above. What is essentially the Hard Ticket to Hawaii of B-horror films, Silent Night, Deadly Night 2 actually follows a pretty straightforward and totally not batsh*t insane plot: After spending years in a mental asylum following the murder of his older brother – a serial killer who committed his heinous acts while dressed as Santa Claus – 18 year-old Rick Caldwell (played by the approximately 37 year old-looking Eric Freeman) escapes to seek revenge on the abusive nun who raised him… and anyone who stands in his way.

You know, that old chestnut. Anyways, in a performance that could not be described as anything less than a tour de force, Freeman disappears into the evil, maniacal Caldwell, chewing scenery with such reckless abandon that upon seeing it, Gary Oldman reportedly suffered a shame stroke. To this day, I’ve never seen an actor display more emotional range purely through his eyebrows than Freeman, yet both he and SNDN 2 were almost entirely looked over at the 1987 Academy Awards. Shameful. 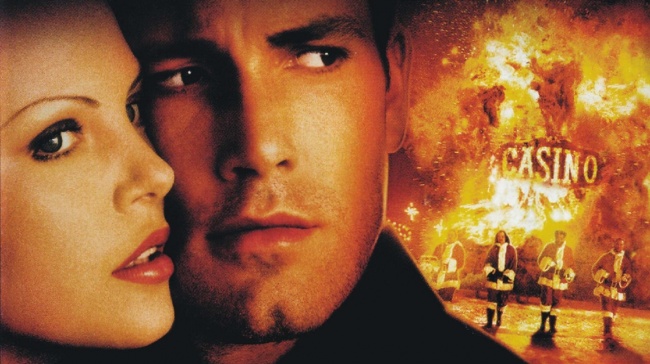 Not unlike the baseball team he’s always repping, Ben Affleck went through a pretty low point, career wise, for a while there. Gigli, Jersey Girl, Surviving Christmas, the appropriately-named Paycheck… it’s hard to imagine that the man behind The Town and Argo seemingly could not pick a decent script, but amidst all the dreck that Affleck churned out in the early to mid-aughts was an anti-Christmas caper classic, Reindeer Games.

The plot: Affleck stars as an ex-con named Rudy (get it?!) who assumes his cellmate’s identity for the holiest of reasons – to sleep with his woman (Charlize Theron) – only to find himself caught up in a gang heist led by Gary Sinise. Hijinks ensue.

I’ll be honest; Reindeer Games is not a good movie. It is not even close to a good movie, and I’m speaking from a purely objective standpoint here. It fell $10 million short of recouping its $42 million budget and scored just a 21% approval rating on Rotten Tomatoes, but it is the kind of unintentionally hilarious, so-bad-it’s-good dreck that *only* stands out when compared to movies with things like acts, a defined narrative structure, or a moral. And as far as Christmas action flicks go, well, you can only watch Die Hard so many times, right? (Wrong. I am wrong.) 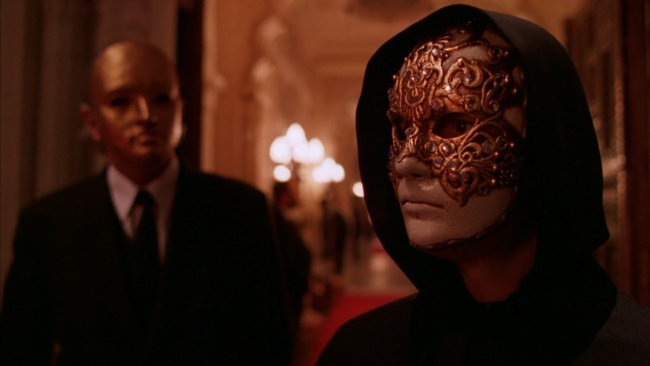 HEAR ME OUT FOR A SECOND.

While the idea of seeing tiny Tom Cruise infiltrate an elite, secret society of mask-wearing orgy-ists is probably the last thing that most of us would consider “family fun holiday entertainment,” let’s think about what most of us have to go through for the sake of “family” – the awkwardness, the forced cheerfulness, the turkey that Aunt Maureen cooks the living f*ck out of year after year (have you simply given up, Maureen? Or have your taste buds been permanently obliterated by years of food so dry that it can be described as “ashy” when you leave the room?!!).

At some point during our Christmases, one of our grandparents is going to say something incredibly racist, whether positive or negative, about Barack Obama. Another relative is going to ask us why we haven’t gotten married yet and whether it’s because we’re one of those “Cat Jenner transexuals.” A third will get blitzed on Mint Julep and grab one of their kids too hard. ONE OF THESE THINGS IS GOING TO HAPPEN AND WE ALL KNOW IT. Screening Eyes Wide Shut at your family Christmas party is a matter of payback, plain and simple. It’s a matter of rebalancing the awkwardness scales, one bare-assed shot of Tom Cruise at a time.

And I know what you’re thinking: “But Jared, Eyes Wide Shut doesn’t even take place during Christmas.”

Well to that I say, the important part of it does. The catalyst for Cruise’s entire sexual odyssey – you know, the sexual odyssey around which the film’s entire plot is based – begins when his wife (Nicole Kidman) almost cheats on him at, you guessed it, a Christmas party. Check and mate.

What Modern Movies Would Look Like With VHS Cover Art

J.J. Abrams Talks About Why [Redacted] Had to [Redacted] in The Force Awakens