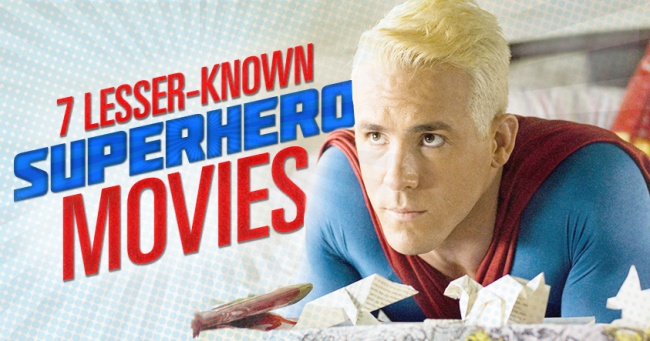 It’s safe to say that, after this past weekend, Deadpool is a character that the general audience recognizes. Deadpool made a record-breaking amount of money at the box office and was well-received by both critics and audiences. Prior to its release, though? Deadpool was seen as more of a niche character. Comic book fans knew him, and maybe some people knew of him, but the general audience? Not so much. Today, we’re going to talk about seven lesser-known superhero movies that failed to do what Deadpool did.

William Klein‘s satirical superhero movie saw its hero decked out in football pads and spewing the most right-wing phrases imaginable in order to defeat those darn Commies. He’s Captain America if Captain America was done as a profane joke, not as a serious character. Combined with late-’60s Red Army paranoia and taking on villains such as Red China Man and Moujik Man, Mr. Freedom is unlike almost any other superhero movie out there.

While Marvel is putting out a theatrical Dr. Strange movie later this year, a previous attempt at turning the character into a known name came in 1978, when Philip DeGuere directed Dr. Strange. It was released on television with the hopes that the network would like it enough to pick it up for a potential TV series. That didn’t happen, and the film wound up largely being forgotten about. It hasn’t even gotten an official DVD release, although you can still find VHS copies out there.

Before The Toxic Avenger there was Swamp Thing. While The Toxic Avenger was more of a joke, Swamp Thing was a serious take on the idea. A man falls into toxic waste and winds up becoming a swamp monster. It’s a very simple film based on a DC Comics character, and despite getting a sequel and a TV series, it’s one that not a lot of people know about. It was even directed by Wes Craven, whose name you might recognize from such films as A Nightmare on Elm Street, Scream, The Hills Have Eyes, and The Last House on the Left. There were talks of a reboot as late as 2010, but they haven’t yet come to fruition.

When people talk about Punisher movies, they usually discuss the awful 2004 film starring Thomas Jane or the awesome 2008 one starring Ray Stevenson. Often left out of the conversation is the 1989 one starring Dolph Lundgren. It was bad, sure, in large part because it was mostly just another late ’80s, early ’90s action movie but with the Punisher thrown in, but it was still an R-rated superhero movie, and there simply aren’t a lot of those. Lundgren was even a huge star at the time! Sadly, it’s mostly been forgotten.

Starring Billy Zane – I know, right? – The Phantom is a silly, silly superhero movie based on a 1936 comic that feels more like it belongs in the 1960s than the 1990s. This one sees the Phantom travel to New York City in order to stop a businessman from procuring three magical skulls which contain the secret to ultimate power. The movie is a joke, but it’s worth remembering for the simple fact that Billy Zane played a superhero. Also, there was a TV mini-series in 2009 that rebooted The Phantom, because apparently nothing is sacred.

Paper Man is the movie that nobody remembers when they’re talking about failed Ryan Reynolds superhero movies. We remember Blade: Trinity, X-Men Origins: Wolverine, and Green Lantern, but Paper Man? Gone. It’s probably due to the fact that, while it does contain a superhero – and Reynolds plays the superhero – it’s not really a “superhero movie.” The superhero Reynolds plays is imaginary, the manifestation of a man who’s just not ready to grow up and deal with the world as an adult. So, Reynolds shows up as a transparent Superman imitation, and actually kind of nails it – even though the movie on the whole wasn’t well-received.

Okay, full disclosure: I may or may not have made an entire article idea simply to justify talking to you about Pizza Man. This film stars Frankie Munez as a pizza shop worker. He eats a genetically modified tomato, which gives him superhuman strength. As one does, he then has to battle the forces of evil in order to keep his powers and also to win the heart of a girl. The film includes cameos from Stan Lee, Adam West, and Roddy Piper, while Diamond Dallas Page plays the villain, a Two-Face wannabe. This thing has to be seen to be believed, folks.

What are some obscure superhero films you remember?