Dear Dr. Mark,
Whenever I play an RPG with a morality system, I tend to go for the evil actions without thinking. I’m normally a nice guy in real life, but are these games trying to teach me something about myself? Am I secretly evil, or, at least, not a very nice person?

I’m assuming you mean playing one of the “bad guys” in a game, and not simply acting mean towards other players, which we discussed in another column. Videogames provide many opportunities for people to play villains who do lots of nasty stuff. Most gamers I know are basically nice people who know the difference between right and wrong and generally don’t act “evil” in real life. If they misbehave, it tends to be in the realm of neglecting responsibilities or commitments, usually because they are so absorbed in gaming.

So why would nice folks be attracted to the dark side? It may be an expression of an important tendency that we all have, which can emerge in many different ways.

It’s most apparent in small children I’ve observed for years through my professional work. They are refreshingly uninhibited, and many love to play the scary monster who wreaks havoc. Some therapists try to put a happy ending on the story (e.g. the dragon killed everyone, but the little boy escaped, they made friends, and the dragon was sorry), or urge the child to care more about the feelings of the other characters that are being crushed. This may be useful for some kids, but I’ve found others resist it. They have aggressive, destructive, and even sadistic fantasies and they have a strong desire to act them out in their play.

Why would this be? It’s easy to feel threatened and intimidated if you are little and relatively incompetent, whether or not there has been actual abuse or intimidation. Small and vulnerable in a world of giants, children often crave empowerment and may enjoy acting dominant and malevolent in play to redress the power imbalance in their lives.

Play creates a make-believe world where no one really gets hurt, but the scary idea that this can happen is rehearsed in a way that feels tolerable and relatively contained, allowing some kids to work out their feelings and better control themselves in the real world.

Obviously, this doesn’t mean there isn’t lots of actual evil in children’s lives outside of fantasy play. Some are truly subject to terrible traumas and, for others, cruelty can be commonplace. My son recently described a dodge ball game in which he was knocked to the floor by one ball, and as he was trying to get up, a kid intentionally hit him in the face with another ball. I don’t believe his experience is unique, and I don’t think it is necessarily extremely troubled kids who act out like this. We like to think these tendencies can be educated out of people as they grow. While it’s certainly worth trying, the intensity of this effort can create its own problems. 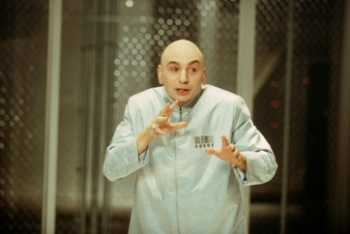 The moral messages children receive about how they should act can sometimes feel oppressive and burdensome. It’s not unusual for adolescents to resist this through acting out and risk taking, which sometimes involves “evil actions.” This may also be what compels some religious and political leaders to transgress: they are working so hard to be paragons of virtue, the burden of this responsibility can create overwhelming pressure and perhaps an unconscious desire to let go of being good all the time.

These brief examples may well be a reflection of something very basic about human beings — that we have nasty, rapacious, and destructive tendencies, which probably served important and even adaptive functions in the course of our evolution as a species. When life is an extremely competitive struggle for survival, it can pay to be vicious.

As history bears out, there are times when these tendencies emerge, and we become murderous and destructive toward others whom we decide are bad. The evil, which children can own through role-playing, becomes projected onto a group of others, and crystallizes as a static identity. We have a remarkable ability to de-humanize these others so that even murder can be rationalized — they are sub-humans, cockroaches, non-entities, and they need to be stamped out for society to be healthy.

But much of the time, these urges are managed, despite the competitive nature of socialized life, where success requires aggression and determination. Most of us don’t succeed by being vicious and evil to others — we actually succeed through cooperation, collaboration, and reciprocity. The adaptiveness of these tendencies is also quite powerful and counterbalances the power of viciousness. However, triumph through planning, consensus, compromise, and delayed gratification requires a significant amount of thoughtfulness and perspective, which can often only be attained through greater maturity.

Being evil can be more fun, more immediately effective, and more satisfying.

So I think you can learn something about yourself from the fact that you go for the evil actions. As part of the human race, you have the same tendencies as the rest of us. You may well be doing yourself some good by having a safe and contained place to act them out, and this can serve a useful psychological function in helping you continue to be a nice guy in real life.

Or you could be rehearsing evil plots and plans that you will eventually unleash upon the world.

But I doubt it.