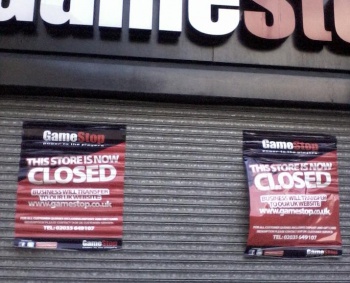 The U.S. based retail chain closed its last stores in Northern Ireland this weekend.

Until recently, GameStop had quite a few stores in the United Kingdom but the retailer is closing up shop. Customers dropping by stores in Newry and Belfast this weekend saw shutters closed and flyers redirecting them to the GameStop UK website for all commerce from now on. GameStop representatives have gone on record saying the closures were all part of the plan to serve British customers via the online portal only. Apparently, that plan doesn’t include stores in the Republic of Ireland, as all of those stores are unaffected.

“We are transferring all of our UK business on-line,” the flyers all read. “We will honor all outstanding deposits and gift cards.”

GameStop said that the closures are a calculated move. “The recent store closures in Northern Ireland are part of our plan, announced six months ago, to exit the UK market from a brick and mortar perspective,” said GameStop’s commercial director Michael Finucane.

“We started this process last year closing our Birmingham, Stockport and Belfast locations,” he said. “Correspondingly, we have experienced tremendous sales growth on our UK ecommerce site. Our go forward plan is to serve the UK market with enhanced digital and online offerings.”

I’m not sure if there are political motivations behind this withdrawal, but the borders seem to suggest something going on behind the scenes. Why would GameStop abandon one territory when it is clearly successful in Ireland already with 20+ stores? Why stop at the border?

The Indie Royale Gets Serious

I Am Alive is Alive!