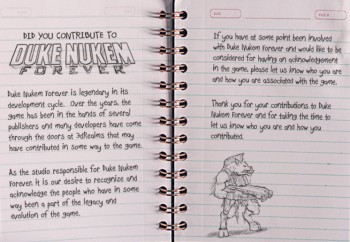 Gearbox has launched a new website seeking anyone and everyone who contributed to the development of Duke Nukem Forever over the years, so they can be properly credited for their work.

Consider this: there are people attending high school at this very moment who weren’t born when Duke Nukem Forever was announced to the public. That’s an awfully long time for a game to be in development, so it’s natural, with all the people coming and going over the years, that some of them would be forgotten. So Gearbox, being the stand-up studio it is, is reaching out to everyone who took part in the project at one point or another so they can be properly credited in the game.

“As the studio responsible for Duke Nukem Forever, it is our desire to recognize and acknowledge the people who have in some way been a part of the legacy and evolution of the game,” the studio wrote on the new “Did You Contribute to Duke Nukem Forever?” website. “If you have at some point been involved with Duke Nukem Forever and would like to be considered for having an acknowledgment in the game, please let us know who you are and how you are associated with the game.”

The search isn’t just for developers; the site lists options for people who worked with publishers, contractors, “press with notable affiliation,” community members and fans. A brief questionnaire follows, asking about contributions to the game as well as personal contact information; the criteria for a game credit isn’t clear but anyone who passes the initial test will be contacted by Gearbox for verification.

It’s a very cool move by Gearbox and I hope the studio is able to track down everyone who’s been involved with the game over the years, even if it’s likely to add up to the longest credits list in the history of videogames. (Yes, I’m one of those people who sits through them at the end.) Did you give the Duke a helping hand somewhere along the line? Toss your name into the hat at gearboxsoftware.com/dnf-credits – fame and fortune await!

Coming Together Over World Domination