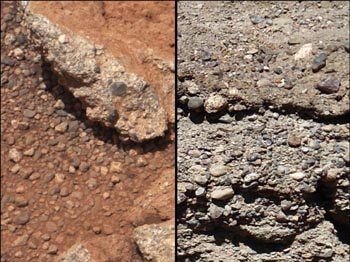 Mars once had a lake with water so law in salt content and acidity that it could have been drinkable.

NASA’s Curiosity rover has sent photographs of a streambed, leading scientists to conclude there was once a fresh water lake on Mars with water that could have been drinkable. The fact that Mars once had water has been known for some time. Scientists knew the planet used to be warmer and wetter, but also very acidic. The evidence of fresh water could prove the planet was once habitable.

The lake would have been hospitable to organisms called “chemolithoautotrophs,” or mineral-eaters. The data provided by the Curiosity rover does not, however, confirm whether these organisms, which exist in caves and deep-sea hydrothermal vents on Earth, actually existed on Mars.

This ancient lake in the Gale Crater, believed to have existed 3.6 billion years ago, was discovered earlier this year, but it was not until recently that the lake was confirmed to have neutral water low in salinity. Previous theories suggested Mars’ surface and ground water had the quality of battery acid.

The Curiosity Rover studied 4 billion-year-old rocks in the Gale Crater. When heated, the rocks produced gases including water, sulfur dioxide, carbon dioxide, and oxygen. Much of Mars still has not been explored. The now cold planet still contains many mysteries. NASA has approved a plan for a new rover in 2020.