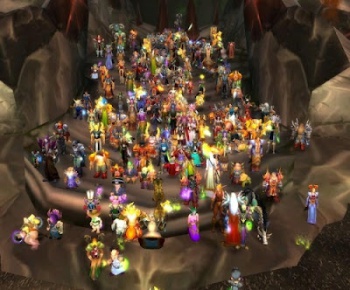 Blizzard has confirmed that microtransactions are coming to World of Warcraft.

The rumor went around last week that Blizzard was getting ready to dip its toes into the lucrative waters of microtransactions in World of Warcraft. Why mess with success? “Money” would be my first guess, and the fact that the WoW appears to be slowly – very slowly, I’d say – but surely deflating. The way of the future is microtransaction-powered free-to-play, and Blizzard wants in on that action.

“For players who are already interested in the in-game items we offer, such as Pet Store pets and mounts, the benefits of an in-game store are pretty clear,” Community Manager Micah “Bashiok” Whipple wrote in a Battle.net forum post. “We think everyone would appreciate the convenience of being able to make such purchases without having to leave the game, and ultimately that’s our long-term goal for the system, though there’s quite a bit of work involved in retrofitting those existing items into the new system.”

Blizzard plans to begin testing its in-game store by introducing, initially in Asian regions, two new items: an experience buff and “an alternate way to acquire Lesser Charms of Good Fortune.” Bashiok said Blizzard has received a lot of requests for those kinds of convenience items, but the final plans for the store have yet to be nailed down. “Ultimately it’s still too early in the process to make any final determinations about our plans,” he wrote, “but in the meantime, we hope you’ll check out the in-game store once it’s implemented on the PTR and let us know what you think.”

Amiga Games Inc Sells For Half A Million

Killing is Too Easy