Tower defense is an odd genre of game. Inspired by old Warcraft and Starcraft mods, this largely passive game type has you sitting back and building turrets as wave after wave of enemies heads toward you. Variations on the genre are few. Sometimes you build the path your enemies take, and sometimes it’s fixed. Sometimes enemies attack your turrets, sometimes they run alongside them. Perhaps the most interactive versions of these mods allow you to war against another tower defender, sending waves their way in a match of who can tower better. But tower defense formula has been set in stone for a very long time, which has prevented the genre from having any real hit releases outside of Plants VS. Zombies. 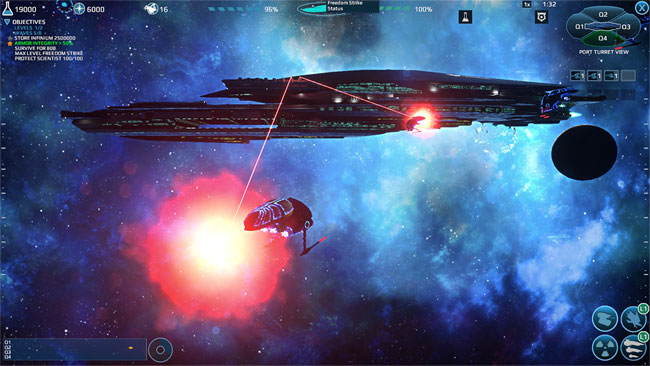 Enter Infinium Strike, an upcoming game that I had the chance to preview some months ago. While Infinium Strike was still a tower defense at its core, the design team did their best to make it feel closer to its parent genre, the RTS. As a result, they came up with a version of Tower Defense where speed and micromanagement was key.

But oddly enough, their design process proceeded from the opposite direction. Instead of attempting to make a tower defense that was more active, they were trying to make a space game. Those titles have traditionally fallen into the RTS genre, and when they’re slightly more passive, they end up in the tower defense genre. Creative Director Dexter Chow explained it, saying,

“We wanted to do a different kind of space strategy game. The actual game play of most of the space strategy games are very large resource management sims (RTS) or epic strategy with tons of ships at a very high view (like taking over planets and galaxies). So, from a macro point of view, the game design is focused on one awesome ship and your job is simple: stay alive and take down as many of the alien invaders as possible.

From a game play or tactical point of view, protecting a battlecarrier from waves of oncoming ships in four cardinal directions felt like a lane style tower defense game. It makes sense that in the future, advanced weapons systems would automatically target and shoot enemies. It also makes sense the weapons would be optimized for distance, size, type and custom for specific enemies.

The action part of the game comes from protecting the ship in real time. Sending out your own custom fleets and using awesome advanced weapons we call SuperTech made sense for the most powerful ship in the fleet: sending them out in one of four directions adds nail biting action to the strategic game play.”

This is what makes me think that there is a lot of tower defense design space that hasn’t yet been explored. Maybe the game is a better fit for new experimental projects and we simply haven’t looked at it yet.

But part of exploring new design spaces is changing a genre’s accepted formula, which Infinium Strike attempts to do. First of all, enemies are no longer trying to get to a base or destination. Instead, they stick around infinitely and attack your ship, making your ship’s health your lose condition instead of, essentially, distance. This also means that you can’t fail on a wave and simply pick up the pieces in the next wave. Every enemy that survives simply makes your situation worse. 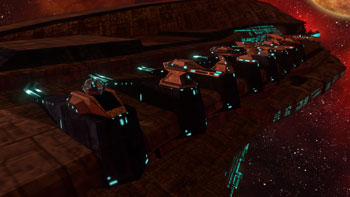 To combat this slow snowball of death in the cold void of space, Infinium Strike introduces a number of active abilities that allow you to do things like send out your own ships to attack the enemy, or heal your gigantic space cruiser. This helps to reinforce the narrative of the game, by making you feel like you have tons of tools but if you don’t use them correctly, you’ll die alone in the middle of nothingness. It gives the whole thing a very Battlestar Galactica vibe.

“We imagined this ship is humanity’s last hope…” said Chow. “We would want in a super ship…

Another thing that reinforces Infinium Strike’s narrative is the feeling that you have to manage many tasks at once. Chow says “We were told by many of our beta testers that we are selling the game short by calling it a tower defense game, because it is a hybrid that is really space strategy with real time action.” What does feel remarkably RTS-like is the way Infinium Strike forces you to focus on only one avenue of attack at once. This feels remarkably similar to how you would have to focus on multiple bases in an RTS.

But changing this core aspect of the tower defense genre introduces new problems. The more a game is like an RTS, the more you have to grapple with flaws introduced by RTS mechanics. For example, in RTS games, you are able to hotkey unit groups and are given notifications whenever you are being attacked. In tower defense titles, you usually get your info simply by looking at the screen. So what happens when a Tower Defense makes you focus on several different areas of the battle all at once?

This was one of my first criticisms of Infinium Strike. Aside from an audio cue, it was hard to tell how the battle was going in any area that you weren’t actively looking at. The design team tackled this issue in a couple interesting ways, according to Chow.

This may be the key to invigorating the Tower Defense genre – understanding how gameplay mechanics interact with each other. The core mechanic of Tower Defense games is clear, build towers in the right combination to stop incoming waves. But changing the way enemies behave, towers behave, and even game win and loss conditions greatly vary the way the player interacts with the game. The speed and tempo of the game changes vastly, which can interact with the narrative in interesting ways. The amount of control the player has can be increased or decreased.

When I first previewed Infinium Strike, I said that it showed a lot of promise, if only a few flaws were fixed. Those flaws, like providing more information to the player, differentiating turret choice, and making the 3D views more basic and easy to see, have all been fixed in a recent build. Now Codex Worlds is calling their game a “tactical starship defense game” to differentiate it from other tower defenses, I’m actually rather excited to see what the next build has to offer. I think the design team is doing a good job breaking new ground, and I’d like to see more development teams fool around with the standard Tower Defense formula in the future. It’s a genre in which we have seen little experimentation, and going further could bring us more interesting games like Infinium Strike.

For more information on Infinium Strike check out its official Steam page.