This would be my coworker Jordan Deam speaking on the ride home from a concert. When asked why, he elaborated: To him, cutscenes just take you out of the game. You can’t interact with them, and it’s essentially just watching a movie – a (relatively) poorly-written-and-acted movie. Storytelling in games, he thinks, has moved beyond these static cutscenes – just look at Portal, which manages to communicate an interesting plot without ever taking you out of its first-person perspective or bashing you over the head with a cutscene.

Maybe he has something of a point. Many games these days are all about letting the player tell their own story. Two titles that come to mind representing this “vanguard” of storytelling are Mass Effect 2 and Heavy Rain, both of which allow you to choose actions in real-time during cutscenes, the results of which alter the plot and making it more of an unique experience defined by the player. Don’t like the informant giving you lip? Shove him out a window. That’s if they necessarily force players to advance the story at all – you could just chill in the worlds of GTA4, Fallout 3, Oblivion, or any other of these open-ended worlds all day and do what you like, cutscenes and storyline be damned.

But as single-player games move away from the age of the cutscene, MMOGs are going the opposite direction. If the cutscene is obsolete, why was it so fascinating to see a story driven by cinematics when I took a look at Aion a couple of weeks ago? Aion wasn’t the first MMOG I’d seen in recent memory to feature a cutscene, either – at the end of a long quest chain in Wrath of the Lich King‘s Northrend, you’re rewarded with an epic scene depicting the battle at the Wrathgate. The Wrathgate event is considered by many to be WotLK‘s own Crowning Moment of Awesome.

Mass Effect 2 and Heavy Rain promise that the player will be able to tell his own story. But in the online space, gamers have been doing that since the days of Ultima Online and EverQuest, and those games had infinitely more stories than even the talented writers at BioWare or Quantic Dream could have ever imagined. In some sense, MMOGs have always been about letting the player tell the story he or she wanted to: Maybe you’re a heroic Paladin seeking to rescue the downtrodden, maybe you’re a nefarious Rogue looking to make a quick buck… or maybe your Paladin is a Knight Templar who thinks he’s more righteous than he actually is. Maybe your Rogue robs from the rich and gives to the poor.

Meanwhile, single-player games have offered a directed story ever since some developer thought “hey, maybe it’d be cool to give our hero a reason to be slicing through the bad guys.” It doesn’t matter how much the player wants Cloud to become a world-renowned sword-motorcycle-racing champion, because he needs to go get his ass in gear and track down Sephiroth, he’s not getting back into Midgar until Disc 2, and – oh yeah – he probably shouldn’t spend too much time leveling up Aeris anyway. You’re going to play the plot as it’s written, dammit! 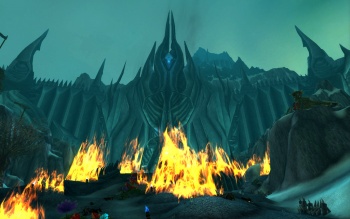 That idea of a linear, guided plot may be going out of vogue in single-player games, but it’s something that MMOGs have wanted to do for ages – but haven’t been able to implement until recently. See, the problem with having a story-driven MMOG is that one of the very definitions of the genre is that it takes place in a persistent world. This means that even when you’re not logged into the game, the world exists and goes on. It also means that it’s largely static – one of the main criticisms leveled at the genre. Orcs menacing a nearby town? Great, you can spend all day slaughtering those villains, but when you log off, they’ll all have respawned, and continue to threaten the helpless villagers.

It makes perfect sense from a design perspective. If I killed all the orcs and it stayed that way, then no one after me could ever do the quest, and the designers would have to continuously make new content for everyone, which is a waste of time and effort. But it also means that players feel like they have no impact on the story and the world.

WoW‘s “Phasing” system was designed to specifically address this problem with a persistent world, and it does so remarkably well. Completing objectives moves you into a different “phase” of the world, where lo and behold, the world has changed! The orc camps are cleared! Meanwhile, your buddy (who hasn’t finished the quest) runs up there, and gets beset by the ravenous orcs.

In a game like Aion that doesn’t have that, though, the cutscene serves the same purpose. It marks the end of a particular campaign and moves you on to the next one. This requires a bit more suspension of disbelief, because the enemy is still where you ought to have slaughtered them, but it still connects you to the world and makes you feel like you’re making a difference.

It’s not perfect, of course, and no matter how many cutscenes there are hailing your character as the noble savior of the downtrodden, the idea is slightly undermined by the nagging knowledge that every other player in the world alongside you has been hailed as a champion in the exact same way. How many Chosen Ones can there be, anyway?

Of course, this is where the strengths of the MMOG come back into play – because even with a guided storyline and cutscenes up the wazoo, they aren’t single-player games, and they have the single most variable and uncontrollable component of storytelling there is: The human element. By providing the cutscenes, the game establishes a framework for the story, but it’s up to us to fill in the details in a way that a single-player game really can’t.

After all, you might be as much of a Chosen One as I am, but how many Chosen Ones have cornered the Mithril market to create a successful blacksmithing enterprise, huh?

Yeah, that’s what I thought.