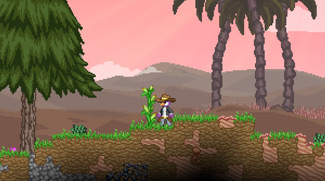 Starbound first hit Steam’s Early Access program in December of 2013. The survival title garnered a ton of attention, and by early in January of 2014, had already sold over one million copies. Now, after over two years on Early Access, the game is finally poised to launch, Chucklefish said in a blog post yesterday.

Many changes are set to come along with launch, which will be heralded by the release of the game’s 1.0 patch.

First off, you’ll be able to play through Starbound‘s completed story mode, which the official blog post describes as follows:

“You are a Protector in training. The protectors belong to the Terrene Protectorate. An organisation formed on earth by humanity to protect and guide the universe towards peace. The story begins on earth, on your graduation day and quickly has you hurtling out into the stars.”

The blog post also mention multiplayer improvements, changes to planet generation, new dungeons, crafting changes, and support for modding through the Steam Workshop, among many other new features. You can check them all out in this blog post on the game’s official site.

Save 89% on The Complete Computer Science Bundle

Enter the Gungeon Review – Shell is Other People