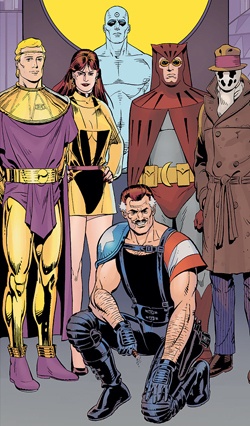 Alan Moore could have had the rights to Watchmen back in his hands, but he didn’t want them.

Alan Moore, the original author of the Watchmen comic series, is known for putting his own principles in front of monetary pursuits. Either that or once he’s done with something, he’s done no matter what. The writer told Wired that DC Comics offered him the rights to Watchmen back this week, but he refused.

“They offered me the rights to Watchmen back, if I would agree to some dopey prequels and sequels,” he said. “So I just told them that if they said that 10 years ago, when I asked them for that, then yeah it might have worked. But these days I don’t want Watchmen back. Certainly, I don’t want it back under those kinds of terms.”

Moore revealed that he doesn’t “even have a copy of Watchmen in the house anymore,” as the way the series was handled seems to have put a sour taste in his mouth. “The comics world has lots of unpleasant connections, when I think back over it, many of them to do with Watchmen,” he said.

DC Comics heads Dan DiDio and Jim Lee have stated that DC “would only revisit these iconic characters if the creative vision of any proposed new stories matched the quality set by Alan Moore and Dave Gibbons nearly 25 years ago,” but Alan Moore doesn’t seem to be into it. After becoming a legend in the world of comics after working on titles such as Superman, Batman, Swamp Thing, and League of Extraordinary Gentlemen, Moore has gotten out of the business.

“I’m pretty much out of comics now,” he said. “I really want nothing to do with it.” If anyone was crazy enough to have a sprig of hope that Moore would somehow come back to the Watchmen franchise, at least they can finally let go because now we know it’s not going to happen. Still, it looks like DC really wants more Watchmen, even if it has to give up rights to the franchise, so I wouldn’t be surprised if something is developed before the end of time.