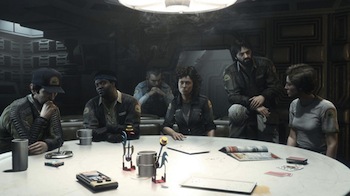 Play as Sigourney Weaver’s Ripley and the rest of the crew of the Nostromo in the bonus “Crew Expendable” mission.

Update: Like the idea of playing as classic Ripley but don’t want to pre-order? No problem. On the game’s Facebook page, it was confirmed that the special DLC will also be released at a later date.

Original Story: Alien: Isolation is supposed to mark a return to the ideals of the original films. That means lots of creeping around, with only the blips from the motion tracker and your beating heart for company. Thus, it’s only fitting that Creative Assembly should also get the cast of the original 1979 Alien to reprise their roles for a series of bonus missions. The only catch is that you’ll have to pre-order the game first.

Any pre-orders automatically get upgraded to the “Nostromo Edition”, which includes access to the special “Crew Expendable” mission. This bonus feature follows the original movie right after Brett’s memorable death scene. After that, you’ll have to lure the xenomorph through the Nostromo and try to flush it out the airlock. If you pre-order from GameStop, you’ll also get “Last Survivor”, which has the player work their way back through the ship to activate the self-destruct sequence before high-tailing it back out again.

It wasn’t just Sigourney Weaver who returned, but most of the original crew. Tom Skerritt (Dallas), Veronica Cartwright (Lambert), Harry Dean Stanton (Brett), and Yaphet Kotto (Parker). Only Ian Holm’s likeness will be used for Ash, and a sound-alike will speak his lines.
“Working with the original cast has been an incredible experience,” said Alistair Hope, the Creative Lead. “For some of the original cast, this is their first appearance in an Alien video game. Seeing them reprise those roles after 35 years was an unforgettable experience.”

Right now Sega says that these missions will be pre-order only, it’s always possible that they’ll return later as DLC.

Alien: Isolation will launch on October 7th for the Xbox One, Playstation 4, Xbox 360, Playstation 3, and PC.