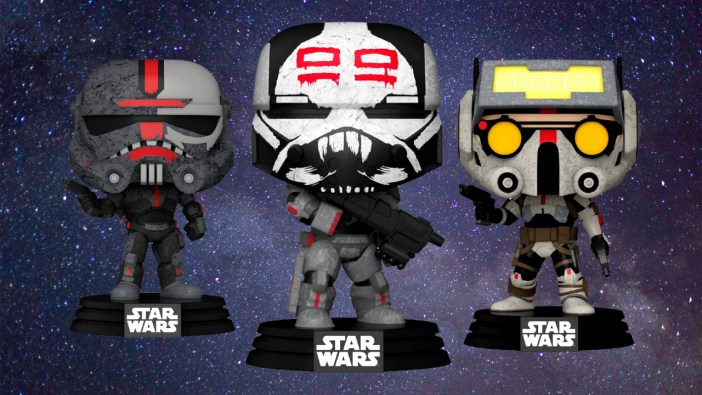 There are Five Bad Batch Troopers but 13 Star Wars: The Bad Batch Funko Pops in All

If it’s just the Bad Batch themselves you’re interested in, you can buy a boxed set featuring every one of the rogue clone troopers, all unmasked. That set costs $50 at Amazon, though it could be up to $70 depending where you shop.

If, on the other hand, you want the Bad Batch wearing their helmets, those figures are available individually. There’s Hunter, Wrecker, Tech, Crosshair, and Echo, all priced at between $10 and $15.

All these Funko Pops, masked and unmasked, have wobbling heads, which is a cool little feature, especially if you plan on mounting one or all of them in your car. All of them are around 3.75 inches tall, though Funko does sometimes make oversized versions of their Pops, so keep an eye out.

On top of that, there’s another Hunter Funko Pop, Hunter (Kamino), which comes with a pin and different, battle-worn helmet colors. Then there’s Omega, the young female clone who, for better or worse, ends up in the charge of the Bad Batch. She has her own Funko Pop.

That’s the Bad Batch covered — but what about other characters who have featured in the show? Many of those characters have their own Funko Pops. Fennec Shand for example is available as a regular-sized Pop, though she’s not part of the Bad Batch line.

Right now, the only other official Bad Batch line Funko Pop is bounty hunter Cad Bane with his robot, Todo 360. Marketed as a convention exclusive, he’s a little pricier than the rest of the range at around $20-25, but you can still get hold of him.

These are all readily available, though Funko has “vaulted” Pops in the past, meaning they’re no longer in production. And to no one’s surprise, their prices go up when that happens. We can’t see the Bad Batch going away anytime soon, but you never know.

So then, these are all 13 of the Star Wars: The Bad Batch Funko Pop figures, available as one five-figure set and eight individual figures: