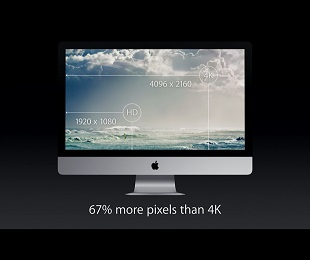 Apple’s latest press conference took place earlier today, and several product lines were refreshed during the event. With the iPhone getting attention last month, iOS 8 and OS X Yosemite were touched upon, as was the Apple Watch, but the real stars of the show were the iPad lines and the iMac.

Since the question will be posed in the comments — What’s the point of a 5K display? I’ll hedge a little, and say, there isn’t one, at least for the average consumer. A/V professionals will like the high pixel count (especially those shooting video on 4K or 5K sensors), but for the rest of us, it’s a really cool, cutting-edge piece of tech, and that’s about it.

Last but not least, the Mac Mini got a spec bump, and now comes with Intel’s latest and greatest. Starting at $499, the $699 model comes with a 2.6 GHz dual-core Intel Core i5, Intel Iris graphics (HD 5000), a 1 TB hard drive, and 8 GB of RAM. If the Apple TV (which did not see an upgrade today) isn’t powerful enough for you, but you still want a Cupertino product under the TV at home? This might be the place to start.

The iMac, and Mac Mini are on sale today on the Apple website, while the new iPad models go on sale tomorrow.

Excited about any of the new/refreshed models? My 2012 iPad is looking a little tired now, so an Air 2 might be on the agenda soon. And as much as I’d love a 5K display on my desk, I won’t be buying one attached to an iMac. Drop your own thoughts in the comments.