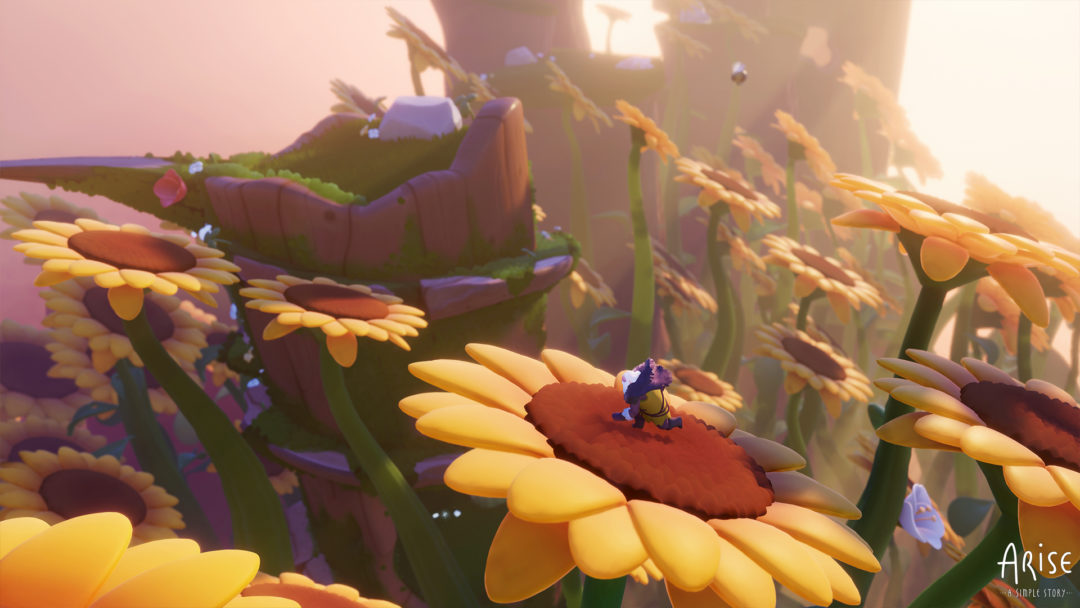 “(Technical director) Jordi Ministral and I were advertisers for 20 years, and after 20 years of advertising, we had, you could say, a mid-life crisis,” Corominas said. “We started to look back, and we said, ‘Okay, we have the same amount of time ahead of us as we have behind us. What are we leaving behind? What have we missed?’ We were not having fun with advertising at that point; it wasn’t fulfilling. So we decided to create a video game company. Easy as that.”

The company the two founded is Piccolo Studio, named in honor of Porco Rosso mechanic Fio Piccolo, and their debut project is 3D adventure Arise: A Simple Story. Corominas said that he and his team see themselves as artisans rather than developers and that two decades of experience in advertising gave him a strong foundation in interactive storytelling.

“As advertisers we crafted experiences like touching drops of mercury with your mouse, or painting with ink in the air,” he said. “All this has a connection with a Japanese word. It’s called ‘kansei.’ That means that it’s pleasant to touch, it’s pleasant to interact with. We tried to translate that into the game. So that’s why, in the second level, the giant sunflowers are nice and move at the exact pace that they move. And when you jump on them they bounce just a little. You can jump into a snail, and the snail reacts like, ‘Whoa, what are you doing to me, man?’ All these little details are the tools that you have, as a creator, to communicate with the user. And all these come from advertising.”

Arise: A Simple Story is the tale of an old man, and that tale begins with his death. The game’s nameless protagonist wakes up in Limbo and is given the opportunity to relive 10 formative moments from his life, which represent the entire spectrum of human emotion. Although the game’s visuals are larger than life and its themes are deep and rich, Corominas insisted that the project is actually quite humble in scope.

“We’re talking about very universal, relatable feelings that everybody can understand. That’s why we called it A Simple Story,” he explained. “We’re talking about the joy of being a child running in the woods, about being a teenager in love, about being elderly and recalling your life. We put a lot of ourselves in the game, but it’s very ordinary stuff that we’ve all experienced. The old man is an ordinary man.”

Ordinary he may be, but the old man has one extraordinary ability. The central mechanic of Arise is the ability to control time. In keeping with the game’s thematic obsession with time — how much we have left, how we spend it — each level takes place within a different time frame. Some levels represent a single day, others take place across several months, and some occur within a fraction of a second. Each stage will require players to manipulate time at a different scale in order to progress. The sunflower level, for example, takes place across one day. Moving time backwards and forwards causes the sun to move across the sky, and the sunflowers will follow it, creating new pathways. In levels taking place across greater temporal spans, players might have to raise and lower water levels by shifting between winter and spring.

Time manipulation is also at the heart of the game’s unique spin on multiplayer. In Arise‘s “Together Mode,” one player controls the old man as he runs, jumps, and climbs through his own memories, and the other handles all the time shifting. The mode was designed to enable two players to equally contribute towards progressing the story, even if they have vastly different skill levels.

“Because it’s a game that talks about very universal emotions, we thought it would make sense if you could share all these with the ones you love, the ones you care for,” explained Corominas. “I love to play story-driven games, and my wife is always watching me play. But I want to play with her, and there are not that many games that you can explore with your loved ones. So multiplayer in Arise is essentially the same as single-player, but player two has a more laid back experience. But at the same time, both players are required to overcome the challenges. Because that’s life, right? Overcoming things together.”

That all-welcoming attitude has already resonated with some members of the development team. Arise‘s soundtrack is being done by composer and audio designer David Garcia, who won a BAFTA for his work on Hellblade: Senua’s Sacrifice. Garcia is a full-time employee of Ninja Theory, but he was so taken with Arise that he agreed to compose its soundtrack in his spare time.

“We wanted to have a very emotional main theme for the game, and we wanted this theme to transform itself for every chapter,” Corominas explained of his ambitions for the game’s music. “So when you’re playing level two, the main theme turns very John Williams-like. You know the E.T. soundtrack? It goes through a register that’s close to that. In level three it’s very melancholic. In some levels the music suddenly turns into a waltz, or a lullaby, or something darker. And because we have no words in the game at all, we have no dialogue, we say that the environment and the music are the language of our game. So we put a lot of time into making sure that they were emotional, and that they were supporting the narrative and the gameplay.”

Corominas and Ministral didn’t dissolve their advertising firm just to make one game. Corominas said Piccolo Studio is in it for the long haul and that he wants to challenge himself with every successive project. He rejects the idea of creating sequels and says the studio’s next project — which it has already begun working on — will be meaningfully different from its first.

Arise is a small game that represents a big risk and is shooting for big emotions, but Corominas has reason to believe that it’s going to find its audience.

“I’m eager to hear people say they were touched by the game, that they laughed, they cried, that they said, ‘Oh yeah, I remember when I was a kid. I remember my first kiss. I remember when I lost someone,'” he said. “We had someone on Twitter, he watched the Arise trailer during State of Play, and he tweeted something like, ‘I loved Arise. While I’m playing it, I’ll think about my late grandfather, and the adventures he’s having right now.’ That’s amazing. That gets to you. This is the kind of thing that makes you proud and justifies quitting the advertising industry.”

Arise: A Simple Story comes to PlayStation 4, Xbox One, and the Epic Games Store on Dec. 3.

Godzilla vs. Kong Release Date Has Been Pushed Back 8 Months

What I’m Thankful For – The Big Picture