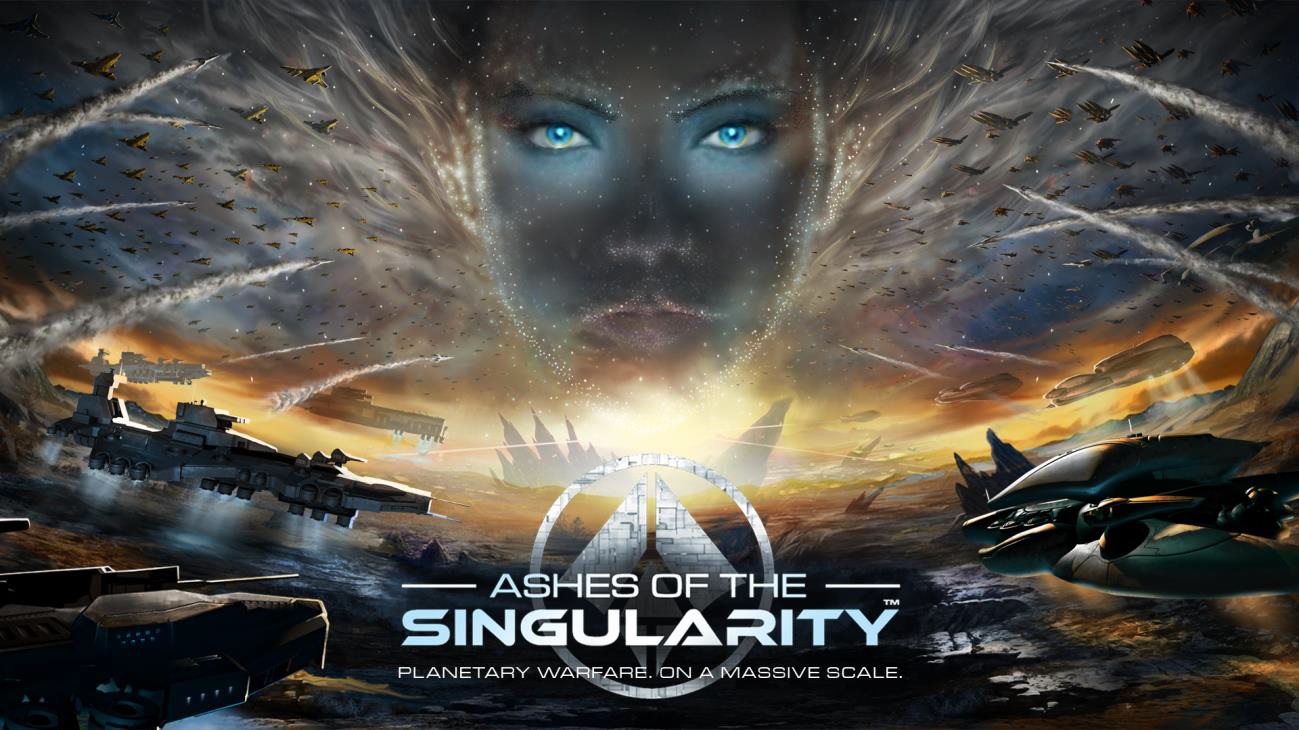 Editor’s Note: The Escapist is working with Stardock to bring fans this walkthrough and developer diaries for Ashes of the Singularity, its upcoming strategy title that is currently in Early Access on Steam.

Ashes of the Singularity is a new real-time strategy game whose alpha build has just gone into Steam early access.

If you’re still ready for annihilating all opposition across planets in the universe, read on.

This walkthrough assumes you know how to play real-time strategy games. We’ll be referring to Sins of a Solar Empire, Starcraft, Supreme Commander, Total Annihilation, Kohan and Company of Heroes since these are games that have influenced this game’s design.

The year is 2178. The technological singularity has arrived and Humans have become so powerful that they individually control entire planets. The ultimate resource that these Post-Humans desire is called Turinium and few planets are suitable to be converted into it. Conflict is inevitable.

You, the player, start out with a single Nexus and must command it to construct Engineers who in turn will construct factories, research matrices, metal and radioactive extractors, defenses, aircraft, dreadnoughts and much more in order to capture the Turinium generators already seeded onto the planet and annihilate any opposition that may be trying the same.

If you’ve played Total Annihilation (or Supreme Commander) and Company of Heroes, then you will have no problem with Ashes of the singularity.

Like Company of Heroes, the map is broken up into regions. Captured that are contiguous to your Nexus provide you with resources. Like Total Annihilation, resources are streamed in and out meaning that resources are spent as the unit is built rather than paid for up front.

Players interact with the map similarly to Sins of a Solar Empire through an empire tree and zooming in/out to see more of the map. Like Company of Heroes, there is a mini-map that focuses on showing where your control groups are and the types of regions on the map.

Are your video drivers up to date? If the answer is NO, then get the latest drivers. If the answer is YES but only because they stopped making new drivers for your card back in 2012, you won’t be able to play this game.

Seriously, get the latest drivers. Both AMD and NVIDIA have released updated drivers that optimize for Ashes of the Singularity’s Alpha builds.

Video drivers for DirectX 12 are still evolving. Use the Benchmark to see which works best for you. Generally, if you can use DirectX 12, do so.

If you are running Windows 10, you can get more performance by throwing in another video card as long as you run DirectX 12. The brand and model doesn’t matter as long as it supports DirectX 12. You don’t need to connect the cards together. It’s not SLI or Cross Fire. You can even put an NVIDIA and AMD card next to each other. They won’t fight. It’s magic. You’ll need to check with the forums (www.ashesgame.com) to get the latest news on optimizing since this is the first game to use this DirectX 12 feature.

The main menu will have 3 relevant options at this stage:

As boring at this sounds, we recommend running the BENCHMARK. This game has very high hardware requirements because it uses a new type of rendering for PC games.

There will be other articles that go into detail but in essence, the rendering is essentially a real-time version of how CGI in movies are done. That’s why even the relatively simple art style and simple models look so distinct. This is why the hardware requirements are high. So first thing: Run the benchmark. 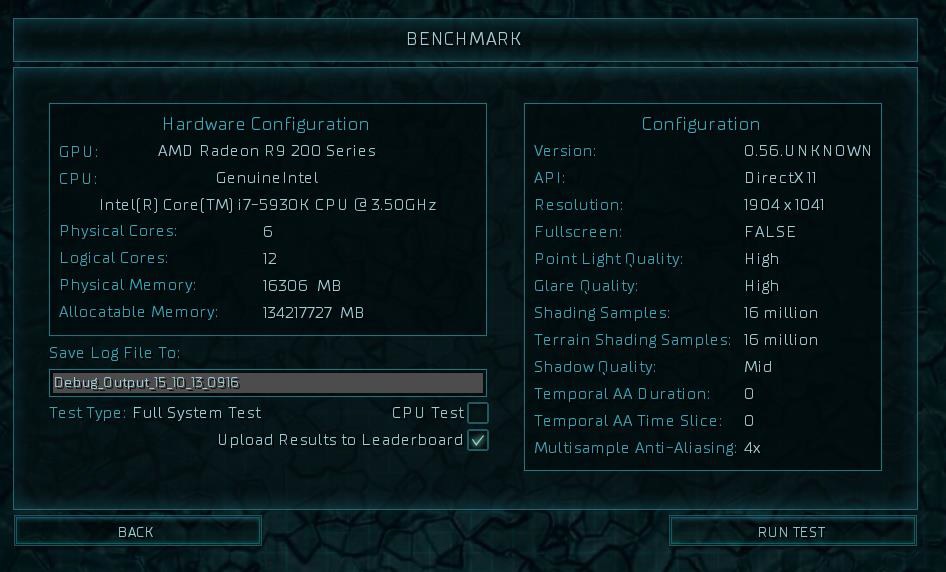 If you don’t have at least 4 cores, 8GB of system memory you won’t be able to run the game effectively. By release, there will be a lot more display options to make it work on more systems.

When you get done with the benchmark do you like the performance you got? If not, go to the OPTIONS menu and try turning things down. Try DirectX 12 vs. DirectX 11 if you can. Post your results on the forums if possible.

For your first game, choose a 2 player map and change the AI to beginner.

NOTE ON AI: Don’t assume because this is an RTS that the AI is a push over or has to cheat to win. It may very well be the world’s first real-time multi-core AI (which means that it calculates its strategy on multiple cores simultaneously). Ashes is being developed by a combination of the Civilization IV and V leads, GalCiv leads, Sins of a Solar Empire veterans. People who take AI very seriously.

In short: Don’t ruin your first game experience by assuming you will beat the AI. Keep it on beginner and work your way up.

Because this is early access, there are a lot of annoying UI deficiencies which we’ll walk you around below: 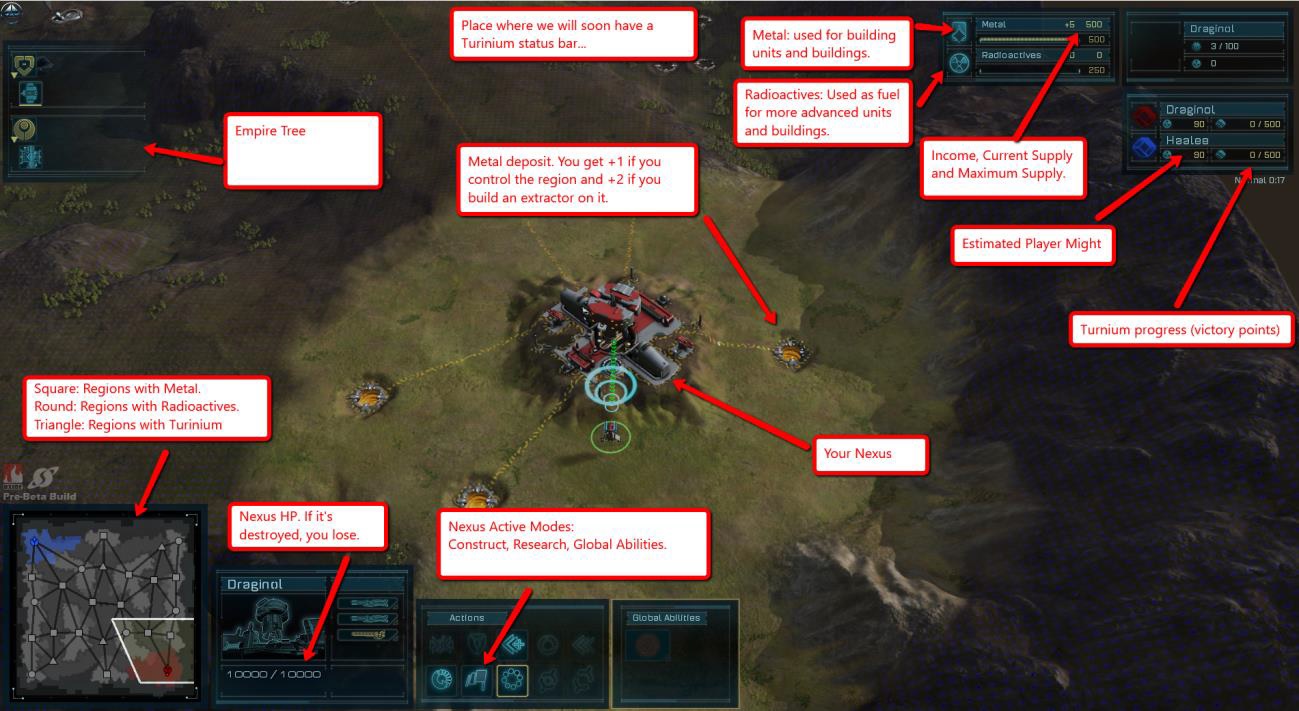 Some basic controls to get started: 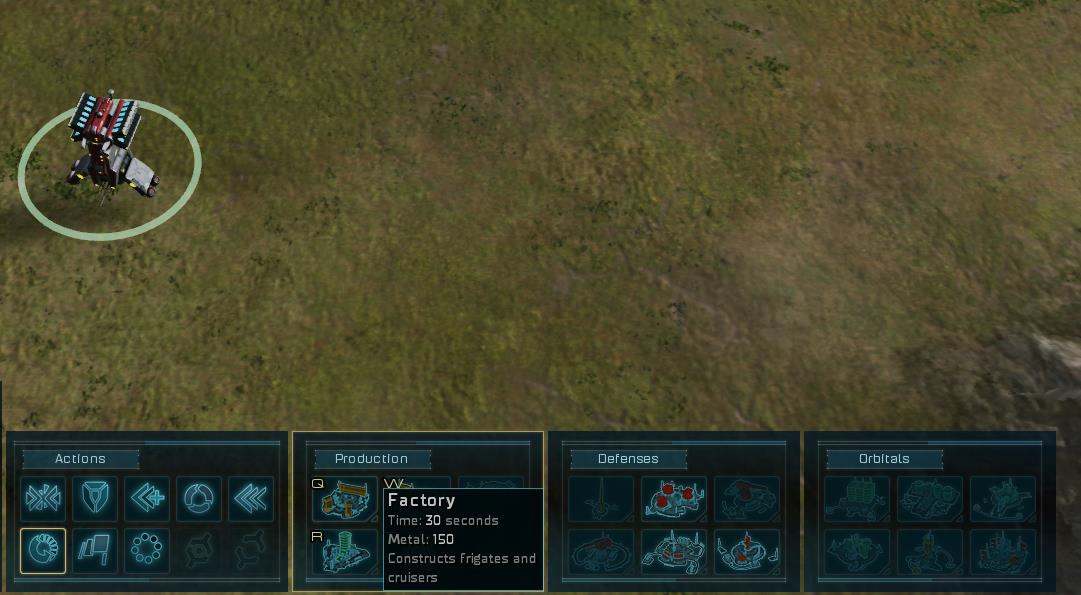 Order him to build a factory. 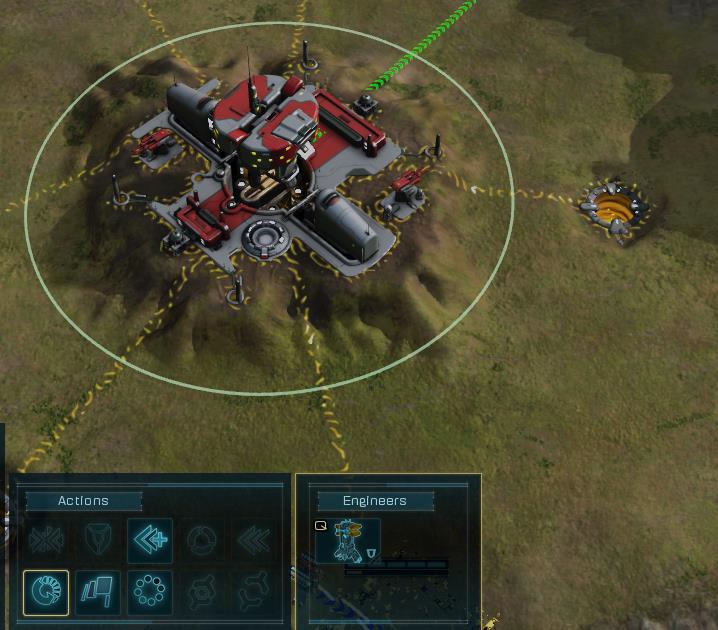 Order it to build another Engineer. Think of these Engineers like the Engineers in Company of Heroes (or as I prefer to play, the Pioneers…)

Keep an eye on your income

By building a factory and another Engineer you are consuming 22 metal per second while only producing 5 metal per second. Much of the skill comes in making sure you don’t ruin your economy so keep an eye on your spending. 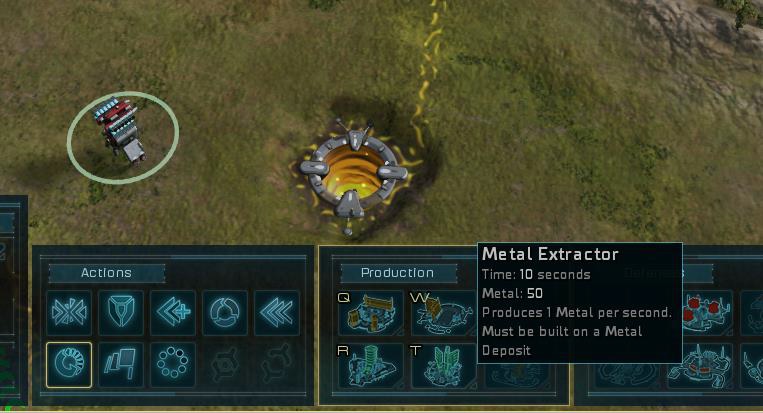 With your second Engineer order it to build Metal extractors. This is a quick way of doubling your income.

Have Engineers help with construction 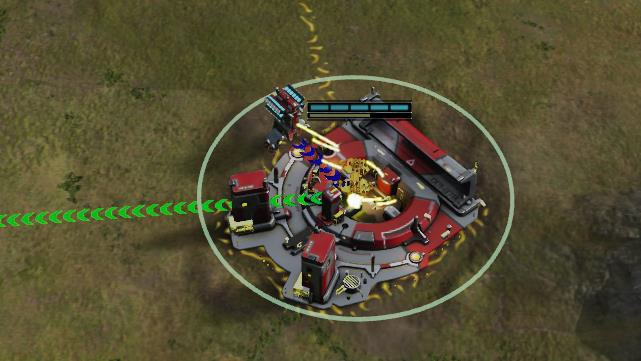 Order the engineer who built the factory to help build units by selecting the engineer and right-clicking on the factory (you don’t have to do this, this is just a suggestion, other players just build more factories). There are diminishing returns for doing this (50% for the first one, 25% for the next, etc.).

With your first units, go out and start capturing regions. 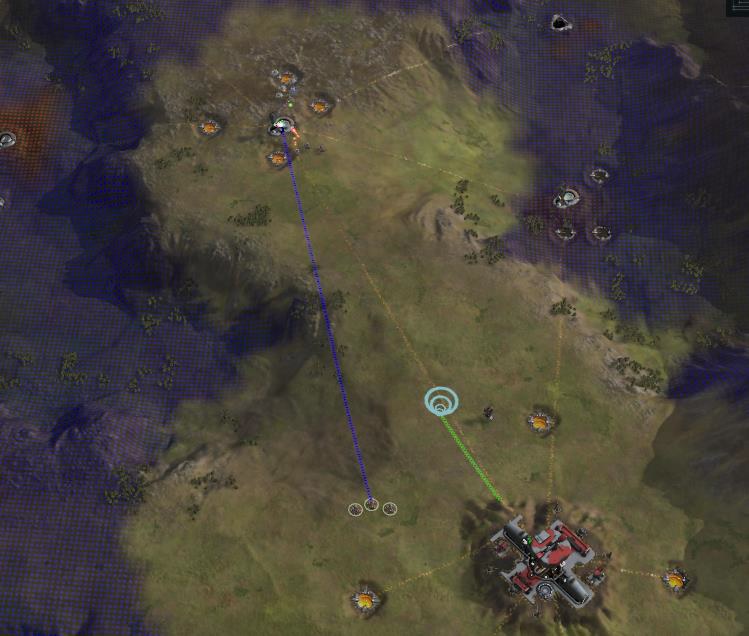 Zoom out and tell your unit to go capture a region.

You will run into the Creeps. These are neutral guardians that begin to spawn at regions after a minute or so. 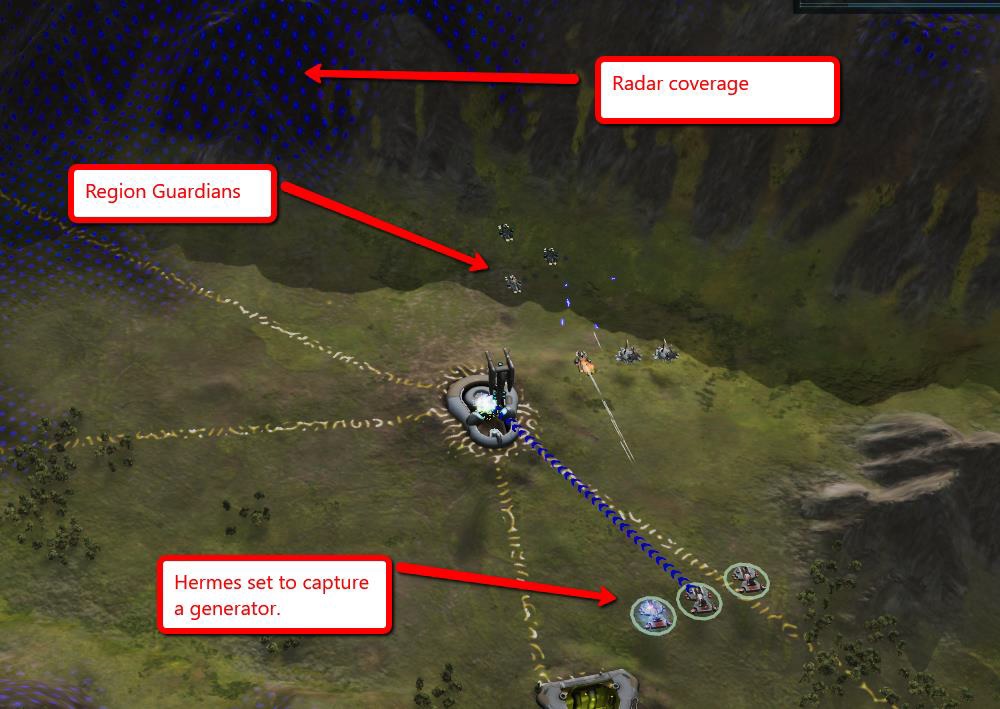 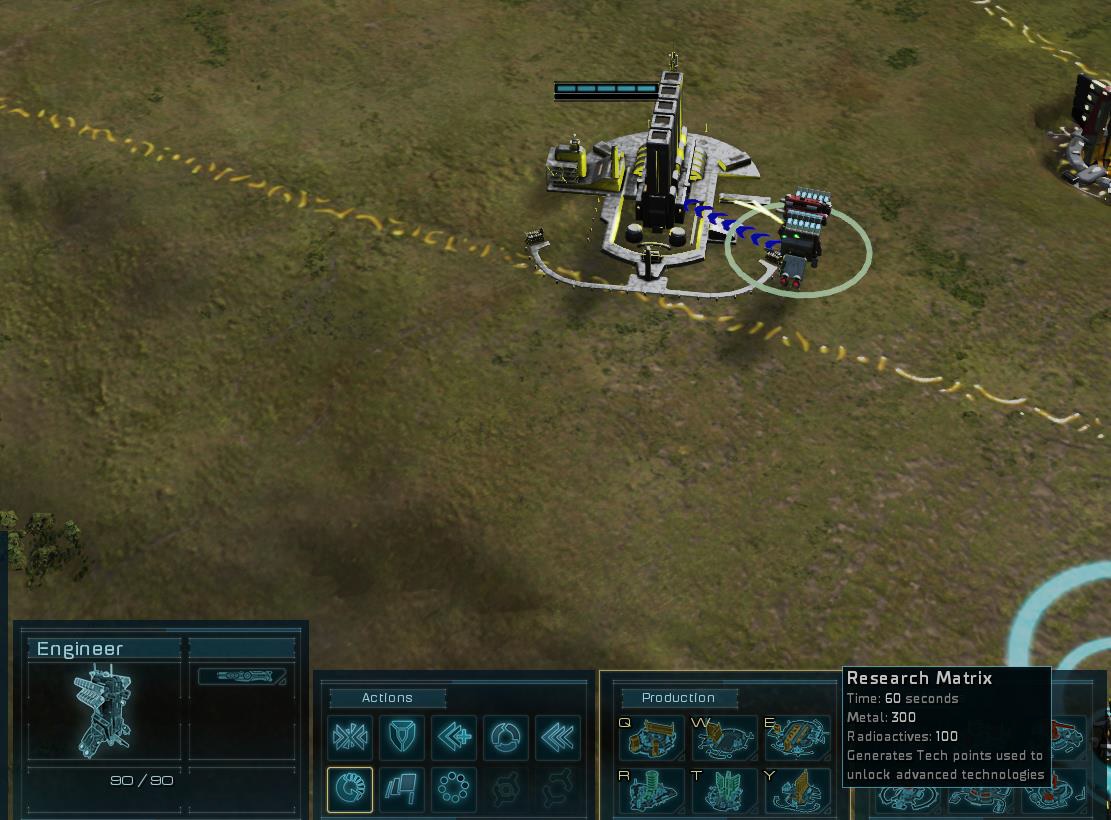 Once you have captured a couple of regions where at least one has radioactives, build a research matrix.

The points are used to level up your technology:

Logistics will increase the # of units you can have. It must be researched via tech points.

Know the units and how to use them

There are currently 4 Frigates, 4 Cruisers and 3 Dreadnoughts in the game for the Post-Humans plus 3 aircraft. Each one has a specific role in the game:

Players can also take these units and combine them together to form an army that acts as Meta unit. Once you do this, they will work together as a single unit.

New milestones will be delivered to Early Access members each month. Below is the tentative schedule Stardock has laid out:

After BETA 3, the direction will depend on the state of the game and player feedback.